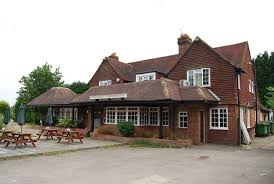 The first thing I was surprised about was the prices – £15-£19 for the main course; and all puddings were £5 each – even the ice-cream. Maybe this is ok in comparison to other places, I don’t know, but I thought this was a bit steep for a pub restaurant. And I have to admit, I might have been a bit harsh on the place because I’ve never really eaten out anywhere except my favourite restaurant, The Hilden Manor, which sadly burnt down a few weeks ago; but it didn’t help that we had to wait 25 minutes just for them to take our order.
They had fantastic facilities for kids though – their own little play-room with dolls and a train set and a telly. (Just as well, considering the waits we had!) And there was a great playground outside, so I should imagine it would be lovely to eat in their garden in the summer. It did look nice outside – even though we saw it through a flood-lit hail storm!
I can’t say I was that impressed by the menu either. I don’t like places who pretend to be something they’re not. I’m not upper class or anything, but I have visited several hotels with my family and read many restaurant menus, and the majority of the time, I have been able to understand them! However, several dishes here were foreign for a start. If I want foreign food, I’ll go to a foreign restaurant, not an English country pub! Well, I picked out 3 choices I could actually recognise; and I wasn’t having the Beef as it was near to £20, so I chose the lamb. Which turned out not to be available. So then I chose the Pork, but had to ask what the thing it came with was (can’t remember the posh name now), which turned out to be spring onion and potato mash. I asked to have it with new potatoes though – which were lovely!
The pork was a bit tough, but the vegetables were nice and the creamy sauce it came in was lovely. My hubby had the fillet steak which was the most expensive choice of steak and was tiny! But there were plenty of steak choices, so if that’s what you like, then this is definitely a good place for you!
The kids menu wasn’t given to us until we were ready to order, so they had the rushed choice of burger and chips – and the burgers were massive, so they did well.
As for the staff; well the waitress wasn’t really hot on the ‘service with a smile’ concept, but the guy who seemed in charge behind the bar and who showed us our table, was very friendly and polite and chatted to the kids, so he made up for it!
Would I recommend it? Well I’m not going to choose to go there again because I thought it was over priced and they didn’t have a large choice of food that I would like. But if you’ve got the money, and like a more adventurous menu (ie one you can’t understand) then this place is probably all right.