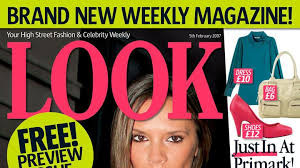 A new weekly magazine
Well it’s about time someone came along and filled this gap in the market. This magazine is the one I’ve been looking for for ages! The only thing that I don’t like about it is the ‘True Life’ stories such as ‘My Mum made me a drug addict’ etc; but there aren’t many, so it’s forgiven!
I am mildly interested in celebrities – I like to have some clue as to who’s who; so I started buying Heat magazine about 8 years ago when it was actually a decent magazine and did the best coverage of Glastonbury; but when it went over the top with endless shock horror pictures of celeb cellulite that was no where near as bad as mine, I switched my pennies to OK! But it wasn’t long before I got fed up of Jordan and the pictures in there got more and more like Heat. So, for the last 2 or 3 years I’ve become completely out of touch with the media world, with no magazines that I’m willing to put in my trolley. When I last picked up OK at a friend’s house I discovered that we’re meant to be on first name terms with everyone and I didn’t have a clue who half of them were.
Look magazine is obliging enough to provide us with celebrity surnames most of the time, but the best thing about it is the fashion. Loads and loads of fashion! Much more important than famous people! (Though a lot of the fashion is on them). Not only that; but it’s affordable fashion. Most of the clothes are from New Look or Top Shop and if most people like it, most people can go out and get it. As the magazine is weekly, it even tells you when the best items are coming into the shops. It plain and simply tells us what’s around, what’s trendy and where to get it. No pretentiousness and so far no obvious agreement with any brands to push their products at us. I like it a lot. Usually a sure-fire sign that it won’t last long due to lack of advertising. Nice for us that we don’t have to flick through pages of adverts before we reach the contents page; but I gather that’s not so good for them.