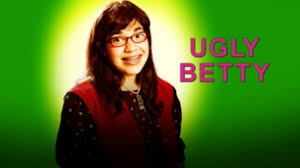 But they don’t know the colours that go!

Channel 4, Fridays 9:30pm. Starring America Ferrera, Eric Mabius, Vanessa Williams, Rebecca Romijn, Alan Dale (aka Jim Robinson), Ashley Jenson
Oh I love love love this programme!!! I can’t believe it’s the last episode of the series on Friday – it’s come too soon. To begin with I was worried that they were trying to make more of this show than it really was. They saw the success of Desperate Housewives with the underlying mystery keeping the suspence going, and they copied that idea with seeing the bandaged woman the whole way through the first series. I have to say I was pleasantly surprised by the Alex/Alexis Meade twist when the bandages finally came off. And it’s got better and better ever since.

The balance with comedy and serious famliy emotions is just right; and the fact that Americans seem to be able to make fun of themselves is worth applauding. The only thing that annoys me is the obvious fact that Betty is pretty and not ugly in the slightest! Actually it pisses me off that STILL Americans think that glasses make someone ugly; though I admit those braces aren’t the most flattering in the world.

Oh actually there’s something else that winds me up, though not the fault of the programme, but the Dulux advert make me shout at the telly every week. Half of the colours they say don’t go; DO go. And half the colours they say do go; DON’T go!!!! It makes me mad! And I won’t be buying Dulux paint because of it. Mind you, if you’ve read my paint review, you’ll know I wouldn’t anyway.