Review of The Rose and Portcullis pub restaurant in Butleigh 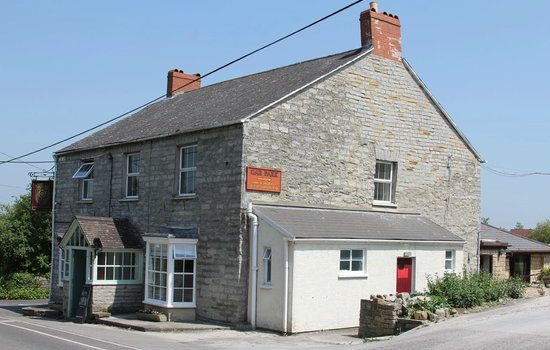 The pub/restaurant in Butleigh, Somerset.

This is one of those reviews you’re not sure you write as the place is run by a friend of a friend who I see in passing quite often. But there aren’t any pictures of me on this website, so I will anyway! It was quite strange going here actually because it was about two doors down from the house we came close to buying. The one I had imagined myself living in before we’d even been to see it; and new exactly where all our furniture was going to go etc.

Anyway, it was (hopefully the first of many) a Girls’ Night Out; a group of Mums, most of whom I hardly know at all, so there was constant chatting throughout the evening. We discussed mice infested attics, the names we use for our private parts, the new home show on channel 4 and how we might go about inviting local celebrity Nick Cage’s wife to our next get together!

There was a spacious car park and it looks like the perfect country pub on the outside and in. We went past the bar to a lovely big conservatory-style extension for the dining area. I have no idea whether or not there are views of gardens as it was already pitch black outside. The menu had a fairly good choice, but there were also several options on the specials board. I skipped starter and had the pan-fried duck for my main course. The meat was ok, the red cabbage was delicious, but the potatoes were over-fried and all crunch with no potato, and there was nothing else. The plate looked quite empty and I quickly ran out of vegetable to go with the duck, which was a shame. It didn’t fill me up at all, but there were no complaints from those who chose something else. For pudding I had the chocolate tart, which was nice, but not delicious – and as puddings are important to me, I do hope for a delicious one when I go out for a meal!

We went in Novmber and I’m annoyed at myself for not making a note of the cost, but I think it was pretty reasonable – about £20 I think.  So, it would be fine to give it a try – just don’t have the duck; you may be better off buying a taste-the-difference pudding to feed the family for half the cost of one portion; and go to the loo before you go. The toilets were quite inadequate. It was a busy Friday night at the bar and I had to ask a large group of people to move out the way so I could get to them. There were no signs either, so this was after asking the landlady at the bar; so everyone knew exactly what I was doing, and as I had to ask everyone to move afterwards as well, how long it took me! Only one loo; clean, but in need of updating.

The mission statement of our renovation.