The Hobbit: An unexpected journey 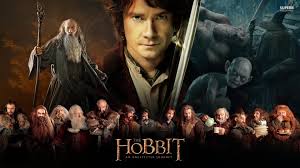 My review of the new film, out now in 3d. Directed by Peter Jackson

Well, there’s no denying it – the people (including me) who thought that it was a bit ridiculous to stretch out the smallest book into three films, were probably right. I am a massive fan of the Lord of the Rings and every year at Christmas we watch all three extended editions and most of the extras as well, but even I was looking at my watch an hour in. It is so slow at the beginning.

I really liked the very beginning – it shows the few minutes that happened before The Fellowship of the Ring, which is lovely, and a great way to put The Hobbit in context with the others. I also enjoyed the back story of the King under-the-mountain, and the dragon and the stone etc. so we fully understood what the film was about. However, after that it didn’t half drag on. The dwarves’ tea party was fun, but took a long time; the scene with Radagast the Brown was purely indulgent. Having said that, the film did pick up pace and by half way through I was properly in it. Even my youngest daughter, who has shown no interest in the other films at all, and didn’t want to come with us, enjoyed it quite a lot! It’s definitely worth going to see, particularly if you’re the fan of the books or other films.

The cast are brilliant, and Martin Freeman is the perfect choice for the young Bilbo Baggins. We felt a few of the dwarfs didn’t look dwarfish enough though!

Oh, I had loads to say about this film, but I could go on and on! Looking forward to the next one, and when the even longer dvds come out we will add them to our yearly Christmas ritual along with the Lord of the Rings films and all the extras too!

Clothing to dye for.