A day in out in Bath during Fashion Week 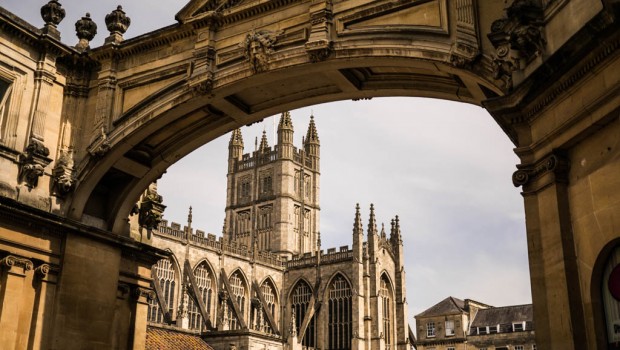 I don’t need much persuading to go to Bath – it’s a beautiful city and considering how close we are, I really should go more often. It’s the annoyingly slow and windy drive that puts me off I think. Anyway, considering clothing is one of my favourite things, I thought I’d go during Bath in Fashion Week. I chose one paid-for event, which was the talk with Livia Firth on sustainable fashion, and was pleased to see on the website that there were plenty of free things going on that day as well…. 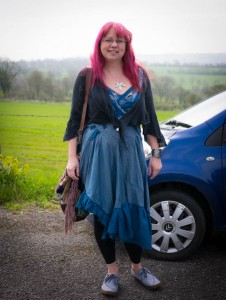 My outfit occupied my mind quite a lot in the days before I went. I hadn’t been to the fashion week before, so I didn’t know what to expect – were there going to be celebrities wondering about (even minor ones)? Paparazzi? Fashion journalists taking photos of the public for ‘Street Style’ articles? I thought I’d better wear something I’d made myself, just in case I had the opportunity to sneakily advertise Oshun. I had really wanted to make something new – something sophisticated and stylish, but quirky enough to draw attention! Unfortunately I completely ran out of time, and instead wore the blue dress I’d made for the New Forest Fairy festival last year. Not exactly sophisticated, but at least different. The cardigan came from a jumble sale with no label in it; previously being white, I dyed it black; the blue shoes are from Clarks and the tights from Tescos. As it turned out, there was none of the above. Walking round Bath was just like an ordinary working day really.

I decided to do the Odd Down park and ride, which was a good decision in the end because the only car park I know how to get to was full. Of course it means you have to make the right choice as to whether or not to leave your coat in the car, and if you buy loads of stuff, you have to keep it with you, but it is cheaper than parking in the city centre! Anyway, this is going to be mainly a photography post because I just wondered around so there isn’t a lot to write about. I had plenty of time to kill before the talk, so I looked around areas of Bath I don’t always go to, which was nice. This view of the river, for example, is something I don’t often see. 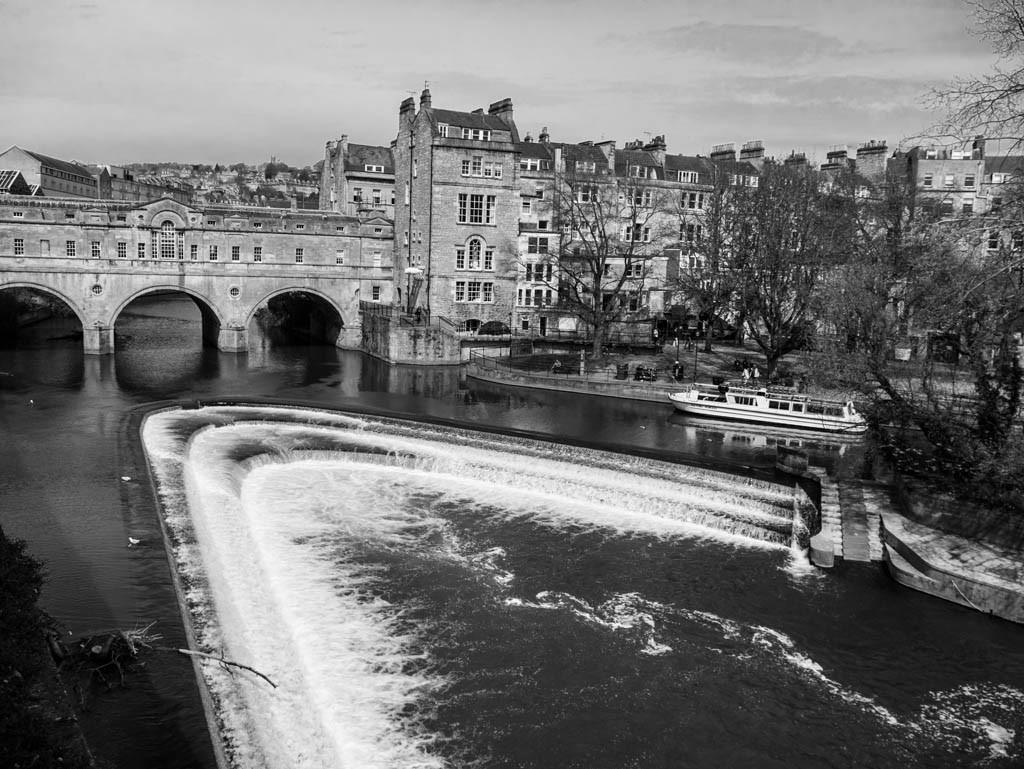 I also discovered that if you keep going and walk towards the entrance of Waitrose, you see the back of the bridge, which isn’t as impressive, but looks very medieval Europe! 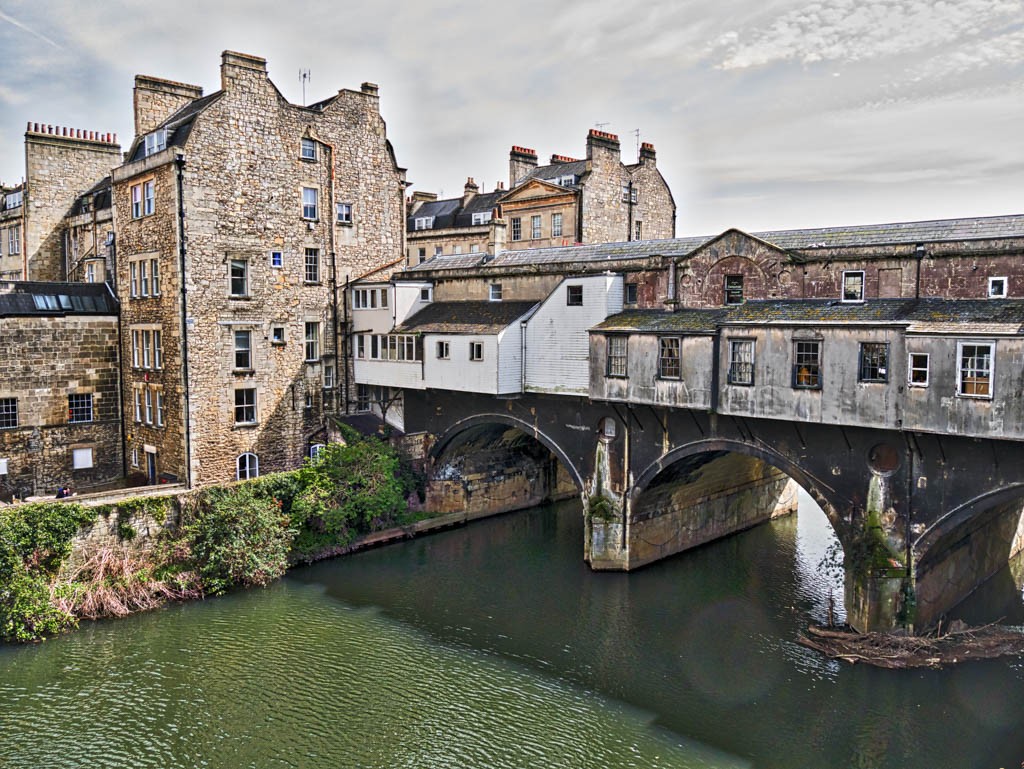 I’ll be honest; I was disappointed. There were no timings online for the free events, and I think they must have all been in the afternoon because when I went in Boden, Topshop and Debenhams (all places listed); nothing special was happening. I wasn’t sure what exactly I was expecting – I’ve never been to one of these things before, (fashion shows of new summer collections would have been nice), but it was a shame I saw nothing at all. I went to Anthropologie for a colouring-in wall, but the sign said it wasn’t till 2pm, so I was an hour too early for that. I did see glasses of fizzy being handed out at a furniture shop right at the top of the High Street, but that was if you stayed for a flower-arranging demonstration and as that’s not really something I’m interested in, I didn’t stay. The park and ride lady I chatted to at the Assembly Rooms later told me there were things happening in Jolly’s department store – I think the one place I didn’t go in to! 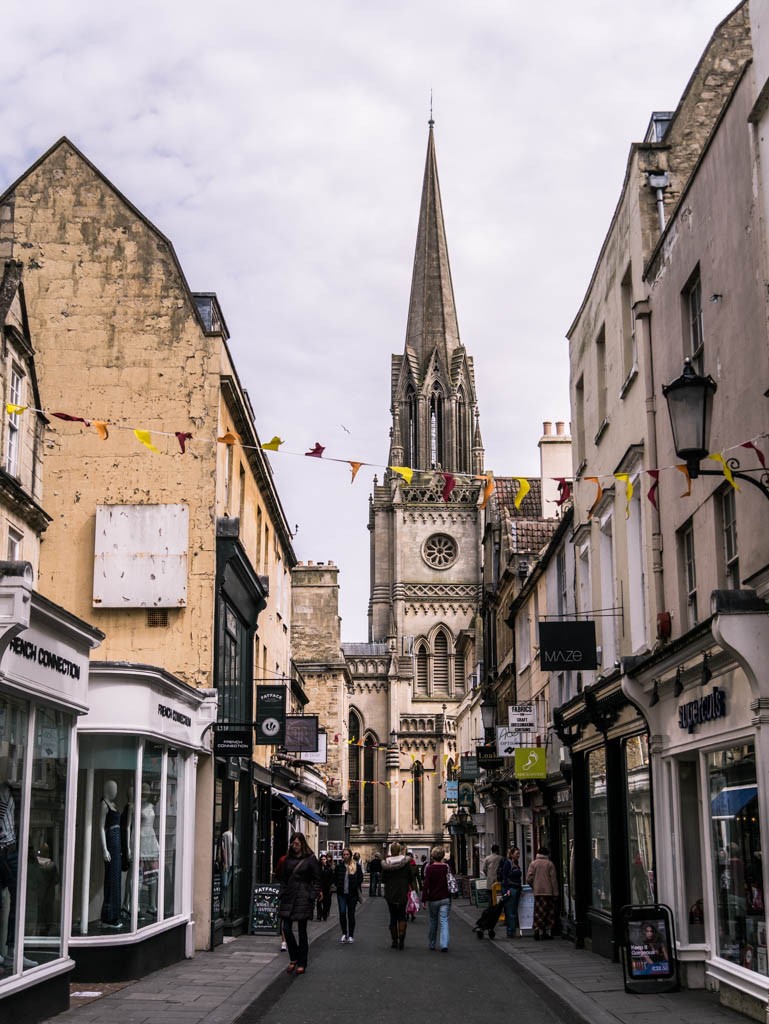 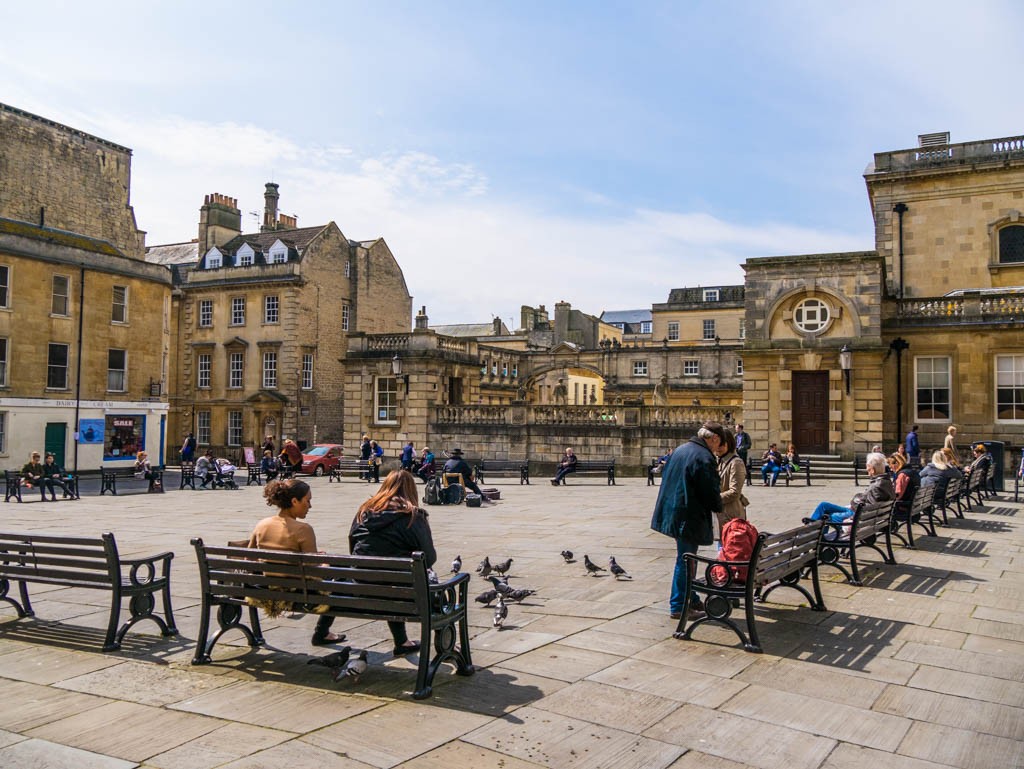 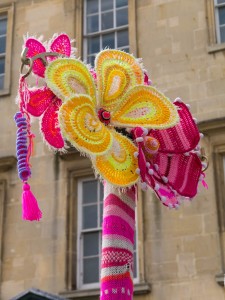 The High Street was wonderfully decorated with yarn bombing. Most lamp posts, parking meter posts and any other posts 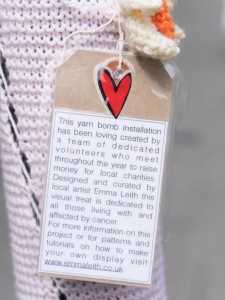 were wrapped with colourful wool, with the ones in the middle having added flowers and butterflies. It’s the sort of thing that really makes me smile, so I hope it all stays there for a bit longer. 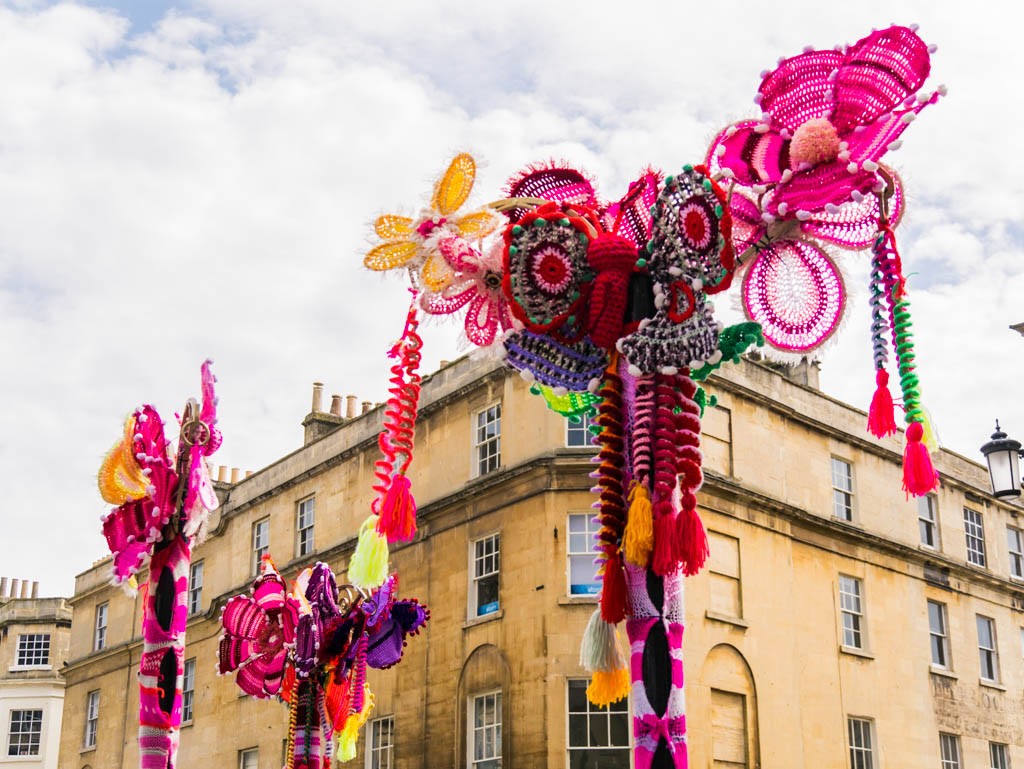 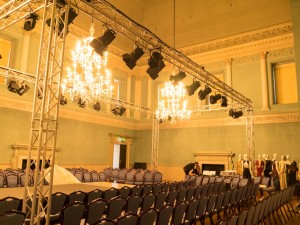 Catwalk for Bath in Fashion

I made my way up to the top and before the Livia Firth talk at the Assembly Rooms, I peaked in at the set-up for fashion shows in the ball room. What an amazing setting! I’ll keep entering competitions and hopefully I’ll win tickets to see a show next year! I timed it perfectly to have an hour to look around the Fashion Museum, which is about right. It’s completely changed since I last went, so I’ll write about that in a post of its own soon. The talk was very interesting, so please take a look at this post if you’d like to know more about it. 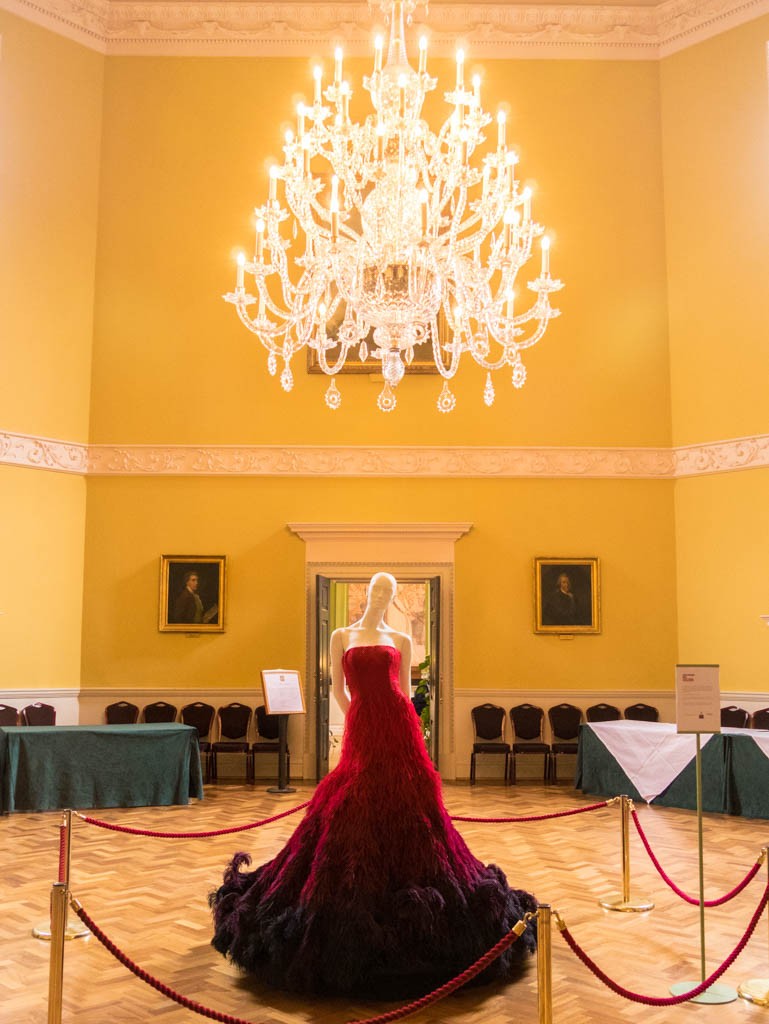 So that was the end of my day really. I didn’t even buy anything from the shops to tell you about. That’s the problem when you start thinking sustainably and asking yourself if you really need something. It takes all the fun out of shopping! Some days I’m in a spendy mood, and some days I’m not and this was definitely a not day. Just because you’ve gone all the way to Bath, doesn’t mean you have to buy something does it? (In my book it usually does though.)

Let me know if you’ve been to a fashion event, and what it was like. Apart from the catwalk shows, does London even do anything during fashion week? I’d really like to get to the Alternative fashion week soon. 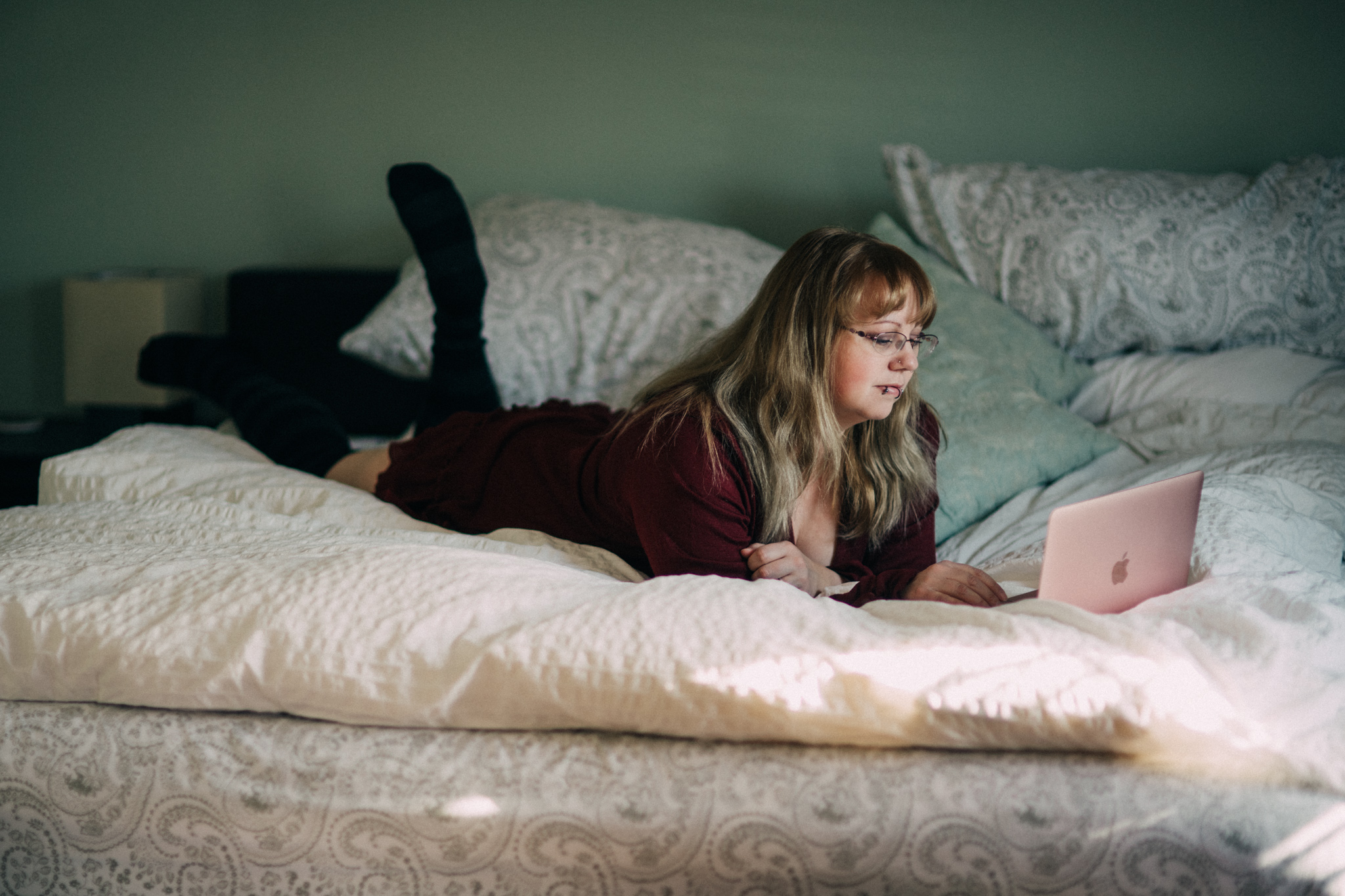 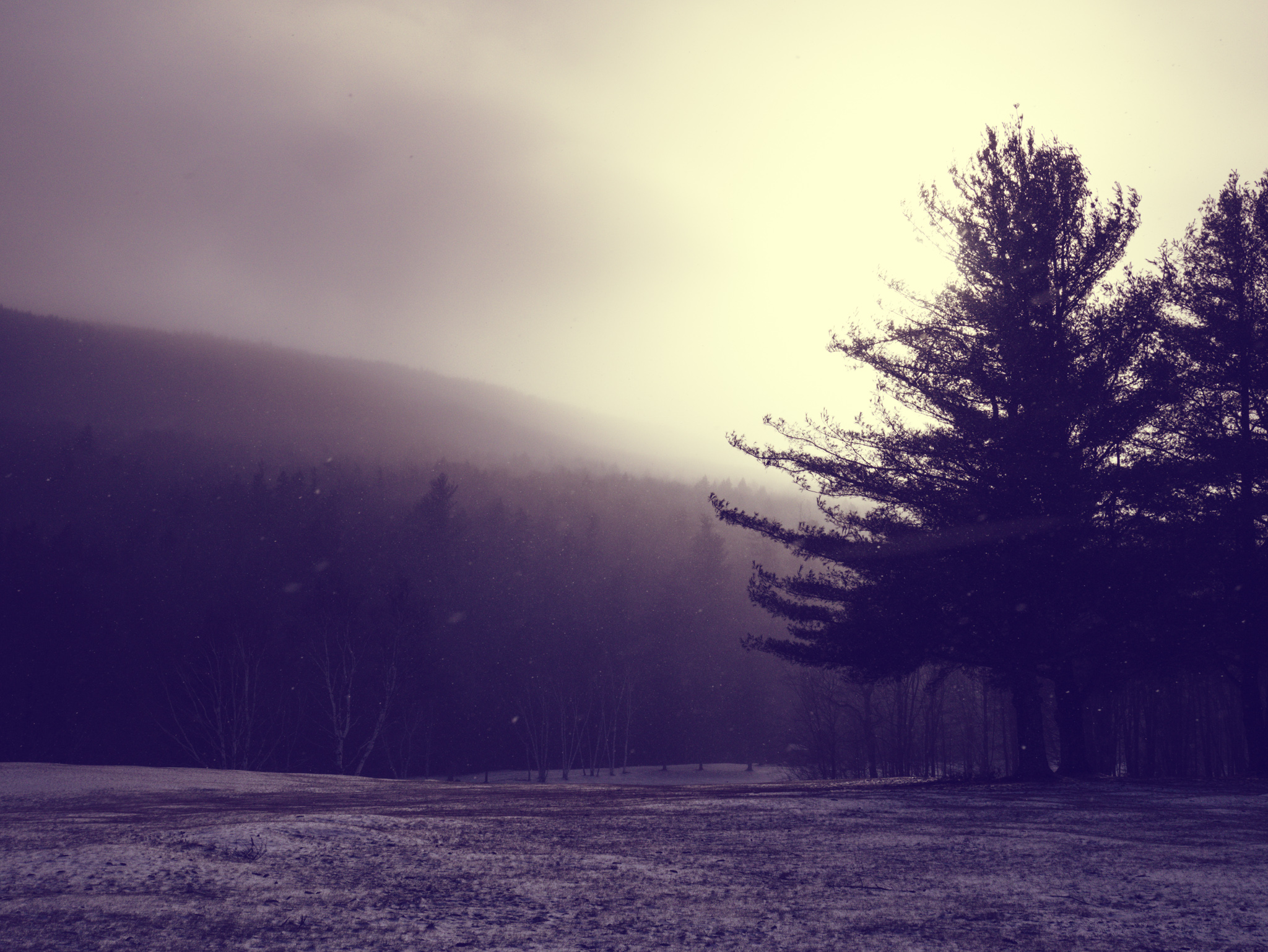