Re-arranging the living room – phase one 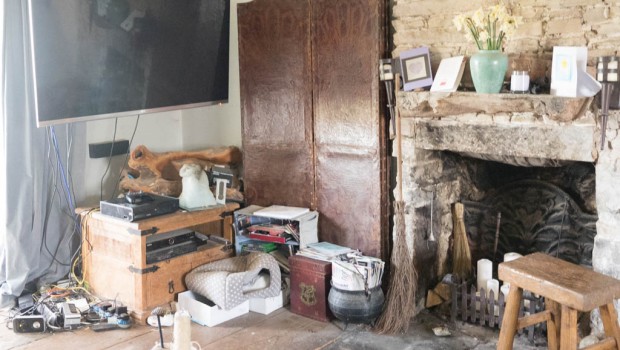 I am beginning this post on the 25th March, though I am sure that by the time you are reading this, it will be several weeks later. Today, after talking about it very briefly last night, we suddenly decided to completely change the layout of the living room. It’s a pretty big rectangular room, so you wouldn’t think it would be too difficult to sort out; but with three doorways, a staircase and a fireplace, it proves a little tricky…. 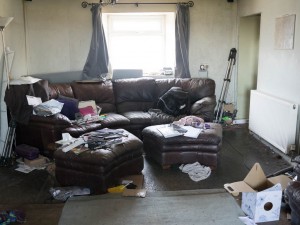 There were good reasons why we had the room the way we did. (The above picture shows how we had the telly corner.) The two-seater and the four-seater settees could both see the fireplace and the telly area, and the bigger settee faced the glass door which looks out onto a beautiful view. The first year we moved to Somerset, which is when we purchased this huge set of furniture, people came to stay regularly and therefore plenty of seating was important. We even thought the two large footstools were a good idea so the children could go two on each one and then we’d all be sorted! (Until both our sisters increased their families by another one, so someone ended up on the wooden stool at Christmas!)
Well, almost eight years on we’ve decided to give space the bigger priority and folding chairs and bean bags from the basement will have to be brought up when extra seating is needed. As well as taking up too much room, the settees always bothered me in that they didn’t really face each other, and were also so far apart. If the dog was snoring next to me, it was often difficult to hear what my daughter was saying from the other side of the room! Also Chris hated the footstools because they just got covered in stuff. (Mainly my stuff.)

So we uhmmed and ahhhed, and really, unless we turned all the seating to face the busy road and a view of a blank wall opposite, the only option was to put 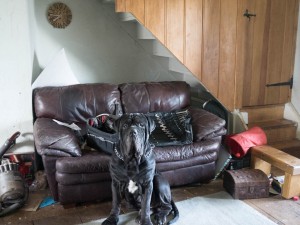 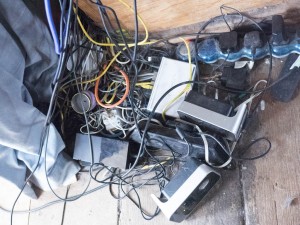 Cables, wires and leads, oh my!

the telly where the stairs were. There was talk about building a wall right across the gap under the stairs and either having the telly on that; or possibly recessed into it, but when, as a temporary measure, Chris put the bracket on the wall in the alcove, we decided a smaller cupboard would suffice. The important thing was to have all the cables hidden and all the black boxes – dvd player; x-box etc tucked neatly out the way. That tangle of cables was really annoying. And look at all the rubbish that was underneath the two-seater settee! It had also been hiding my velvet curtain collection that are in that pile of bin bags! I still need to find a new home for them.

Previous owners of the house had replaced a couple of the ancient elm boards with hardboard for some reason, which broke into pieces when Chris tried 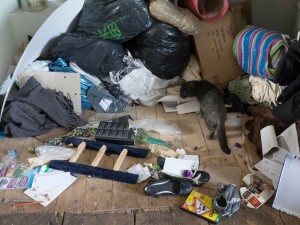 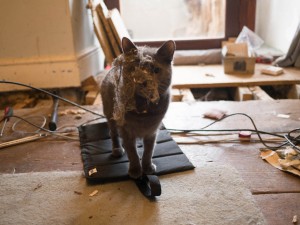 Rafiki and a couple of cobwebs

lifting it to re-route the cables. So that slowed us down. While he was busy planing a board to fit, our cat, Rafiki decided to explore under the floor. This is what his face looked like when he came out! I’ll wax the pine boards to try and make them match in colour as best as possible. We had to get two pine ones as foot-wide boards don’t exist any more and the cost of elm in reclamation yards is ridiculous. We have some elm in the roof, so one day we’ll take out what is salvageable from there and replace this bit of the living room floor.

The weirdly low telly was initially a concern, but when seated, it’s absolutely fine – quite nice and intimate-feeling actually.
The two-seater settee conveniently fitted nicely into the recessed bit of wall next to the fireplace, so that was me and Chris sorted for the evenings. In order to get rid of the four-seater and footstools, Rain and Jude still needed somewhere to sit. Two small armchairs was the plan. One the other side of the fireplace, 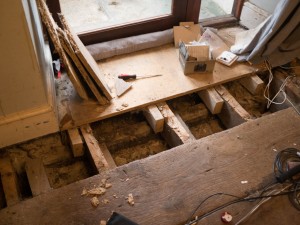 Taking up the floor

and one next to the telly. It isn’t an ideal situation. The chair next to the telly will have to be moved every time we watch it; and apart from that one, (which is also the only place one can see the lovely stone fireplace, which is the best feature of the room), the rest of the seating is all in a row, which is not great for conversation. However, we do use the room differently to how we used to. We are lucky enough to have a large kitchen/dining room and when the four of us gather to chat, it’s usually in there. We only actually convene in the living room two or three times a week, and then it’s usually to watch telly or a

film together. So perhaps it doesn’t matter that most of the seating is simply facing a ridiculously large screen. I’ll pass judgement when we’ve lived with the new situation for a bit longer, but so far so good.

When we moved into our house, the living room was actually only the back portion, and the front was a kitchen. In the first year we did a lot of work; bashed down that wall; revealed the old fireplace; discovered elm boards in the living side and giant flagstones on the other. There is still a lot of work to be done – the rug is hiding quite a large hole in the floor and the ceiling really needs updating from the swirly wallpaper and artex. There’s still some concrete to chip away at over a flagstone near the kitchen and the windowsill needs a proper surface.
The difference in the flooring gives a natural change in use for the room. While keeping an open feel, which my husband particularly loves (and gives me space to do my workout videos), the end with the stone flooring will become a sort-of reading area. The plan is to get built-in bookshelves and have a comfy chair over there, which can also hopefully be brought forward to join the living area. I will keep you posted on how the rest of the room evolves. Let me know if you’d like the big settee and footstools. They are going for free because you will have to clean off the dog slobber I’m afraid! 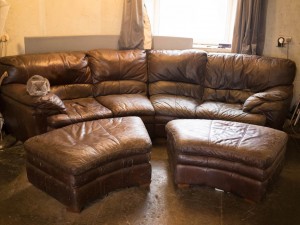 Since we started this room re-jig, we’ve had some busy weekends doing other things and still haven’t cleared out the items we don’t want in there any more, such as the chunky wood side-table and the cd/dvd shelves that we found in a skip when we got our first house. We painted those shelves blue and covered the outside in denim, complete with jeans pocket. How nineties is that?! Probably the height of fashion again now, but not really our taste any more, so that’s off to the garage until we decide to strip and re-paint or whatever.

The hunt for new new furniture has been successful, but this post is getting quite long, so I’ll save that for another day.

Let me know if you’re doing up a room. Do you have a theme or type of look you’re going for? I’m aiming for rustic shabby chic. Chris and I both like rustic, but I’m trying to sneak in a bit of shabby chic as well to make it look less bloke-ish. I’ve had fun making a pinterest board on the type of interior decoration I like, if you fancy a browse. 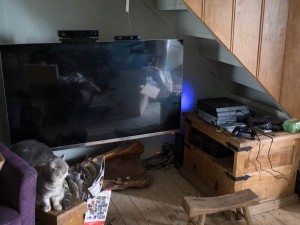 Telly now under the stairs 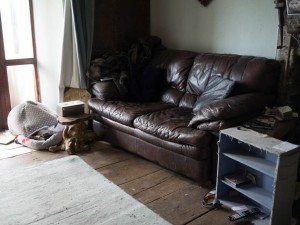 Smaller settee in its new place

A quick review of The Mitre restaurant in Oxford
My trip to Oxford was a year ago now, but I found this review in my notebook, so I thought I’d type it up as it could be useful to someone visiting Oxford. Just to fill you in, as part of my Christmas and birthday presents, I had a little two-night stay in a lovely hotel near the city, all by myself. It was heaven! Anyway, you can never go wrong with a Beefeater restaurant, so I tried the one on Oxford High Street called The Mitre….

Oshun – the story of my clothing brand, and the yellow dress inspired by Beyonce’s in Lemonade