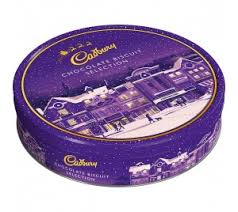 Well, it’s Christmas!
Ok, so I’m a bit early in opening my Cadbury’s Christmas biscuits, but the tin was so shiny and purple and I could hear the little chocolate covered shortcakes calling, ‘Eat me Helen, Eat me!’ So I had to oblige, just to keep them quiet.
So I opened the lid and found loads of packaging. And some more. And somewhere buried amongst all the packaging were a few biscuits. Most of which were either ginger (which I don’t like) or honeycomb flavour (which I don’t particularly like, but will eat when I’m hungry enough) and you got extra of these raspberry flavoured biscuits which were absolutely vile (and nobody would like). So basically there was a scramble for the chocolate fingers and the tiny mini Cadbury chocolate pieces, and the couple of chocolate orange covered biscuits, and they were practically gone before you could say ‘Too much packaging’. And this was in the biggest 1.5kg tin!
For £15 (in Tescos) this was an absolute rip off and a big disappointment. So if you’re going to spend that much money on biscuits for Christmas, get Carr’s Collection. They only cost £3.39 (in Sainsbury’s) a box, so you could get change from buying 4 boxes of them and get double the amount of biscuits – all of which are delicious (except for the white chocolate covered ones as I don’t like white chocolate – but luckily there aren’t many of them).
As you can see, I feel very passionately about my biscuits. This may be the start of many food reviews to come.