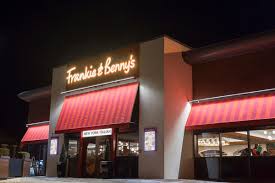 “New York Italian Restaurant and Bar” in Tunbridge Wells.
For the Fima Martial Arts Christmas party, we started off having a meal at Frankie and Benny’s, next to the Odeon Cinema in Tunbridge Wells. There was about 50 of us, so they did pretty well at fitting us in, but we had to wait quite a while for our food. There was a menu you could choose from for a 3 course meal costing £14.95; which isn’t bad value I suppose. I had a starter of Mushroom Alfredo which was delicious; but after that it just went down hill. My main course was titled Traditional Roast Chicken Dinner. There was really nothing traditional about it. The chicken was like the sort of chicken you get in a chicken burger at a kebab shop; the small print does say the roast potatoes were “Italian style” which obviously meant chopped into tiny pieces and fried so there was more crunchy coating than there was actual potato, and the gravy was thick and lumpy.
My friend next to me had Smoked Salmon Penne which had so little actual salmon, it was more like a flavoured sauce. And the girl diagonally opposite sent her steak back because she couldn’t eat it.
We’d pre-ordered our food, and 20 people had chosen apple pie for pudding. But they only had 5 available. Now, my favourite pudding in the world is a nice apple pie, so I thought I was one of the lucky ones who was actually getting some, but I really might as well have defrosted one from Sainsbury’s; so that was a disappointment. And I was a bit annoyed because some of the people could choose from the pudding menu that wasn’t part of the set Christmas menu; so a few had a chocolate crunchy thing that looked lovely. The people with the cinnamon waffles seemed pleased with it.
I suppose for the price and the amount of people there, it wasn’t too bad. But I wouldn’t choose to eat there again.