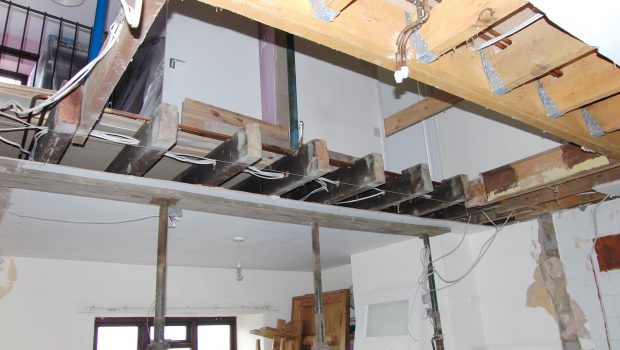 Sorry I haven’t updated for so long.  Summer holidays. Kids. You understand. Anyway, on checking my drafts, I found this post that I must have written just before the festival back in June. I know it”s out of date now, but I’ll put it up anyway so other renovators can empathise and would-be renovators can be warned!

The kitchen wasn’t too bad before last week because I managed to arrange everything in the store room so I could still get to most things. Then we had to stack all the boxes of books in front of the food shelves to make room for the washing machine, which we thought the plumber was going to do last week. He didn’t. And now it doesn’t look like he’s doing it this week either because he’s got another job on and then it’s the festival so he won’t be able to get here.

It’s just getting annoying now. Microwave meals are fine, but whenever I try and cook something it’s a nightmare just to do something like pasta. The cooker is plugged in down in the cellar. So first I have to dig around to find the packet of pasta in the store room. Then take it and a saucepan down and start cooking; then I realise I have to up again for a wooden spoon. I knock off about 2 boxes of books just trying to reach the pot with the wooden spoons in! Then take the bowls down to fill up with pasta. Then take them back upstairs again to eat. You get the idea.

At least Tescos are currently doing a Light options creamy mushroom pasta microwave meal for only £1. So I’ve eaten a lot of those lately. The kids have had their favourite cheapy ones too rather a lot.

I’m just fed up with everything taking longer than we expect it too. Initially the builder said it would take 2 weeks. So I ordered the floor tiles at the end of the first week, and then it appears he actually meant 3 weeks. Today is Monday of the 4th week. We thought we’d have the kitchen in place before the festival when we’re expecting guests, but that is now 2 days away and looking unlikely.

I’m sure it’ll all be worth it in the end!