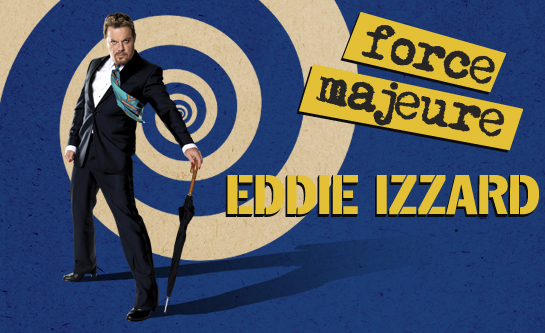 I don’t know why, but I’ve gone off Eddie Izzard a bit lately. Maybe it’s because he was being a little too boastful about his wonderful mind when he was interviewed on the Last Leg earlier this year. Or maybe it’s his politics. I watched the dvd with an open mind though…

Unfortunately I wasn’t brought back to being a fan. I think it’s because we’ve been watching him for so long now and this dvd just stuck to the same old formula he was doing fifteen years ago. Fifteen years ago his accents and mimes of animals were hilarious and his ramblings that all came together at the end seemed spontaneous, but now it was a bit like, well, we’d seen it before. I didn’t feel I was watching anything all that interesting. His ramblings were more disjointed and difficult to follow though even though it all felt too rehearsed – right down to the bits where he makes fun of his own accents and acts like he didn’t say exactly the same thing the previous night.

Also, the night before, we’d all sat down to watch Live at the Apollo on the telly. If you watched that episode with Eddie Izzard, then you watched a routine lifted entirely from his dvd performance. So for fifteen to twenty minutes we were completely bored watching the same thing we’d watched just one night previously. I had a big rant last year about comedians doing the same acts on telly as they do on their dvds, so I won’t go into it again. I just absolutely hate it. I feel ripped off for buying the dvd. Why bother?

Don’t get me wrong, I still enjoyed watching it and there were a couple of laughs out loud, so if you like Eddie Izzard, then I’m sure you’ll like this. Also, our kids found it all a lot funnier than my husband and I, so if you’re new to Eddie Izzard, you’ll probably like it more. He does have quite a different style to other comedians, which I still like, so if you haven’t seen his past dvds or Live at the Apollo on telly, then I see no reason why you wouldn’t enjoy this one.