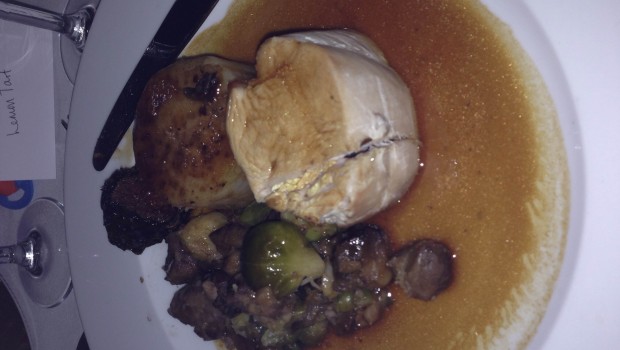 On Saturday evening it was the Shepton Mallet Slimming World Christmas party. It’s a bit weird a slimming group going out for a meal, but hey ho, I’m not going to say no as it’s my only Christmas party with dancing involved this year….

The setting was beautiful – Charlton House is a lovely old building, which I couldn’t see properly in the dark, but definitely worth a look around if you’re after a wedding location. I really loved the interior decor too – particularly in the reception, bar and lounge areas at the front. The food, however, was not the best for the price. I know the posher the place, the smaller the portions, but really, this was taking it a bit too far. The starter was a nibble, not a starter. The main course only filled a third of the plate. Honestly, no-one picked up their knives and forks for ages because we were waiting for the plates of vegetables to come in. They never came – this was it! I took a photo as I was so surprised! And I felt so sorry for those who had picked the salmon because they had even less. It was a good job the lemon tart I had chosen for pudding was a decent size otherwise I really would have been left hungry. Even so, a mince pie afterwards would have been nice, but that wasn’t included. Nor was coffee or cheese. Nor even a tiny little chocolate. All of which are generally standard at other spa hotel Christmas parties I’ve been to. At £35 each, we were all disappointed. That said, the food was very tasty. One might moan that it could have been hotter, but when they’re getting 40 plates out at once, that can be forgiven. To be honest, it was a meal that I didn’t have to cook myself, so I’m not complaining.
The disco afterwards was fine, but 40 of us came into a room where another party had had their meal, so there was no-where for us to sit. Some of us fought over the 6 chairs by the dance-floor, and others dispersed into the lounge, which was a shame. I danced the rest of the evening, so it didn’t often matter to me, but it did mean our group split up and some even left to go the pub. This was probably due to the extortionate price of drinks at the bar. A friend of mine was charged over £8 for a vodka and coke! I had a small glass of wine for £5.25 and it really was small.
The DJ was ok. Music is very much down to taste, but in my opinion there weren’t nearly enough proper party songs in his repertoire. I requested Crazy in Love (which got the whole room dancing) and he also played Shake it Off, and those were about the only relatively current dancey tunes he played. Oh I think there was a Justin Bieber one as well, but I pretended I didn’t notice.
I made the most of it and had a good night, but I wouldn’t recommend going there again for a Christmas party. I’d also be very wary of staying at the hotel and wanting an ordinary restaurant meal at this time of year. Some people were heard complaining at reception about the noise. Well they had put party trumpets on our tables and several people weren’t afraid to use them – a lot. There were only a flimsy set of sliding doors between us and them, so I don’t blame them really.

A new sewing video; this time it's a new design:youtube.com/watch?v=F6W4Vw…