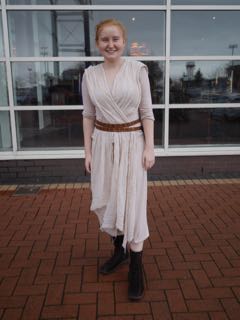 To be honest, I’m not sure there’s much point to this review – you’re either going to see this film (or most likely have already seen it), or you’re not. Well, this comes from the perspective of a non-Star Wars fan, which may help make up your mind if you aren’t sure whether to accompany your partner who is! We went to see it in 3d at Cardiff imax cinema….

My husband has been a fan his whole life. My youngest daughter, whether or not influenced by the hours spent watching them with him while I was at college and she was about 1 year old; also loves the films. She was also the right age when the JaJa Binx films came out – I still hum the tune to the dancing dancing JaJa toy we had. Jude went in a Rey costume I’d made for her and she loved it. Anyway, I can’t say I’m all that bothered about the Star wars films, and nor is my eldest daughter, but we tagged along anyway.

It wasn’t a waste of our time – we both really enjoyed the film. You don’t need to have seen the previous films, although the re-appearance of previous characters will mean more to you if you have. It was pretty much all understandable to those not sci-fi minded, and most importantly, the story was a good one and the actors brilliant, which is the main thing. It very much felt like a modern updated version of star wars for kids, with the main characters being quite young (or maybe that’s just me being old), and I can imagine many a game in the playground with kids choosing their favourite character to be. (Do kids still do that sort of thing these days?)

From a feminist point of view, it was great to see Rey – a kick-ass young female taking a central role. A fairly brave decision considering, let’s face it, it’s always going to be a film aimed mostly for boys; but it’s about time the film industry did this. However the film only scraped by passing the Bechdel test with a tiny conversation between Rey and a female creature thing, (she did have a name, but I forget it), talking about her past.

Needless to say the cinematography and special effects were excellent, so if that interests you at all, you’re also going to enjoy the film. Overall it’s worth going to see The Force Awakens even if it’s not really your thing.