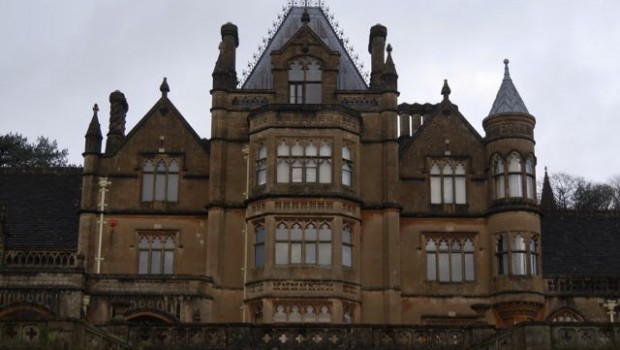 Happy New Year folks! I hope it’s an amazing one for you. We celebrated at home with the fireworks on the telly and it was a lovely night. (A little disappointed that the big house down the road didn’t do their usual display that we watch from our garden, but oh well!)
Despite the crappy weather, we wanted to go somewhere on the last weekend of the holidays, so we decided to go to the National Trust property and filming location of the recent Sherlock special, Tyntesfield Manor…

We discovered this place purely by chance when we stopped outside it for me to be sick a couple of weeks ago when we were on our way to Cardiff! I do get travel sick going round those windy country lanes, but this time I drove to avoid that problem, and fortunately I was fine this time!
Entry to the house was by ticket only as they were doing a Christmas special event, so we were up early yesterday to make sure we were there in time for the stand-by tickets as advance ones were sold out. We were there on the last day, so this review is only helpful really if they re-do it next year, or if the National Trust do similar events here and at other stately homes. Anyway, it was wonderful and I am so so glad we made it. There were several actors dotted around the house staying in character the whole time, and were pretending to be guests, relations or servants of the Gibbs family in 1891. So we were introduced to the house by the butler; I think it was a nephew in the library who did magic tricks; another man-servant (under-butler?) in the dining room, who was possibly your regular volunteer rather than an actor; we were served sherry in the Billiard room and taught a quadrille by a lady in the ball room, and a there was a lady upstairs choosing which dress to take to London with her. There was also a nursery maid, but I didn’t catch her story about the children unfortunately. They all stayed in character the whole time and we genuinely did feel immersed in the whole story. At one point all the characters got together to sing carols and play charades, which was lovely to watch as well.
The decorations were stunning – particularly the dining room, which was simply magical. I hope the person that gets to do this for a job enjoys it! 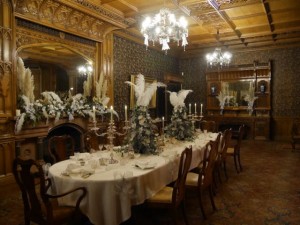 So couple of notes of advice if you are going to this next year, or something similar: they don’t let you go backwards, so hang around for a good while downstairs, before you go upstairs. It may even be worthwhile asking one of the actors if there’s anything about to happen before you move on. Also, it was incredibly dark inside. Maybe it was done to greater the effect of the Christmas lights or to give it more of a Christmassy atmosphere, but we intend to go back in summer to compare. If you’re taking photographs, make sure you use the highest iso setting or they’ll come out blurry as you aren’t allowed flash. I used the Handheld Night shot mode and most of these were fine.
If I’m being pinickity, I have a small criticism and that is the actors should have been briefed on particular subjects that were likely to come up. For example I heard two of them comment on our cameras and that they would have to stand for a few minutes for a photo. Well in 1891, by then a photograph took about the same amount of time as it does now. Also the ladies were wearing dresses that were typical of the 1850s and 60s – short flounced and puffed sleeves with a full round skirt. In 1891 it was the beginning of the end of the bustle era with quite a different silhouette. Sleeves were either straight or the leg-of-mutton style. As they drew attention to the clothes with the lady choosing dresses for London; I did feel that should have been accurate. If the National Trust didn’t have access to the correct costumes, they might have got away with it with the character worrying that the West Country wasn’t up-to-date with London fashions, or something like that!
The house itself is an amazing gothic Victorian house with turrets and archways galore. The grounds are huge and include massive kitchen gardens, a rose garden, an orangery where story-telling was taking place; a restaurant and garden cafe with a children’s play area. It seems a lot of activities take place here and we’ll definitely be returning. At the moment there is a Sherlock Holmes trail for £2.50 with a prize, and a few Sherlock-related items around the house, which I imagine will stay once the Christmas decorations have gone, considering I’m sure there’ll be a swell in visitors due to the Sherlock / Benedict Cumberbatch fandom. It was pretty cool seeing where they filmed The Abominable Bride – the rooms are so much smaller in real life! (Did you watch it on New Year’s Day? A bit of a mind f**k, but utterly amazing.)
So to sum up, it’s definitely worth a visit for a family day out, particularly if you’re in Bristol anyway as it’s only 5 minutes from there.

My daughter’s friend thought it was hilarious that I celebrated my birthday by actually leaving the house and browsing a garden centre (on my own without interruptions)! Well, I thought it was a lovely day! instagram.com/p/CNsy26SMpq7/…

Green - the colour of life returning to spring trees! For your outfits it goes very well with soft creams and yellow; or deep forest browns. Perfect for dressing up as a nature fairy; who’s with me? @ Pilton, Somerset instagram.com/p/CNns74hHBH2/…

Sometimes, in a world of yellow I’m ok with being a lone bluebell; but sometimes I just want to be another daffodil. What flower would you like to be? instagram.com/p/CNnpawusScg/…

I’ll wrap you in velvet and keep you warm. It is a particularly cold April here so far; do you need something warm and cosy to keep warm where you are? @ Wheal Coates instagram.com/p/CNlBXxGnDzC/…