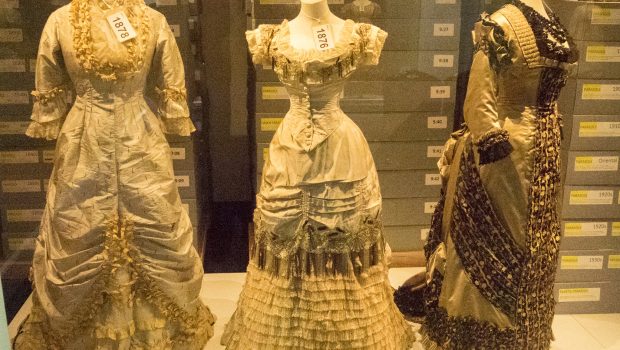 The good thing about Blogtober is that I’m managing to fit in articles that I’ve had in mind to write for quite some time. This is about my visit to the Bath Fashion Museum, which although doesn’t feel like very long ago, was actually in April! It was during Bath Fashion Week and I wanted to make the most of my day-trip, and as I was going to a talk by Livia Firth in the same building, I thought I’d quite like to have a look round the new exhibition called A History of Fashion in 100 Objects….

The building, by the way is the Bath Assembly Rooms, which, as you can easily imagine when you visit, were full of balls and soirees and muslin gowns in Georgian England. You can pop your head into the ballroom and tea-room for free (as long as they aren’t being hired by a wedding – phone beforehand to check). However the fashion museum is downstairs in what was perhaps the servants’ kitchens (-I’m only guessing – I couldn’t find the information online!). 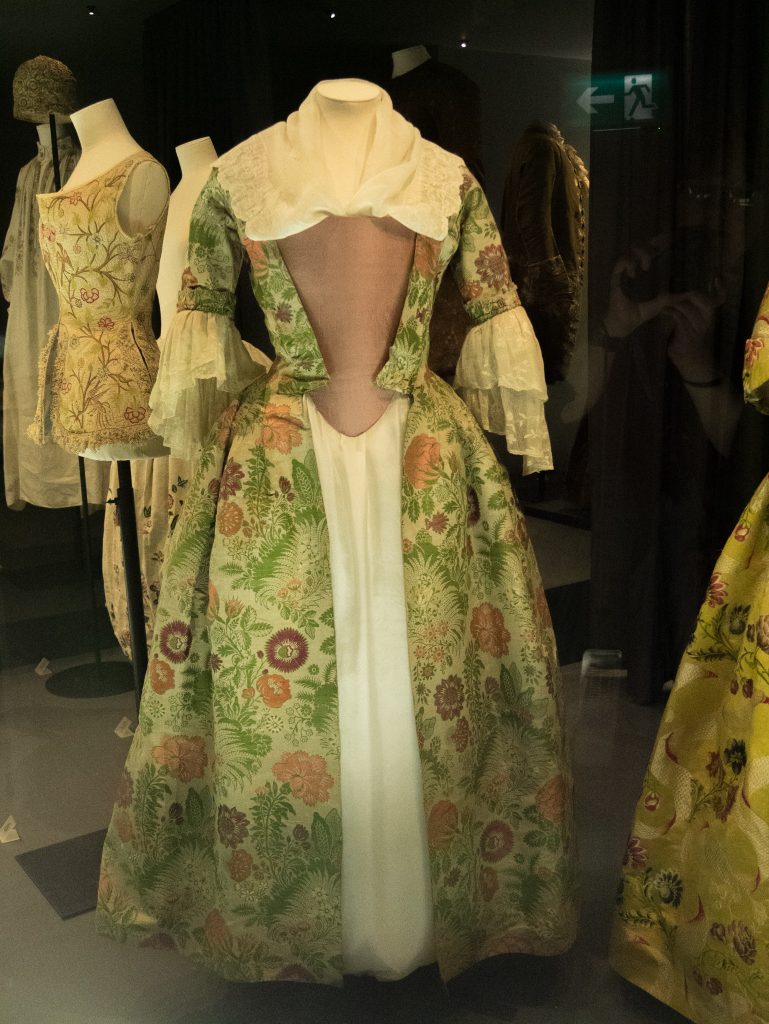 Reminds me of Poldark costumes 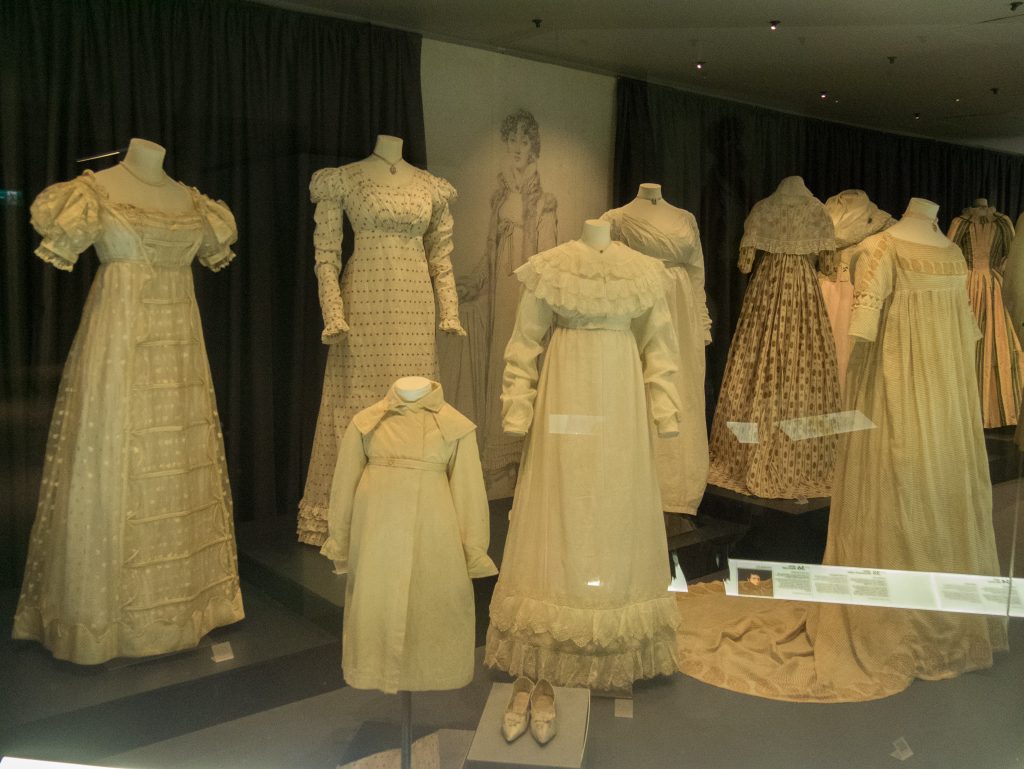 I’ve visited twice before – once when I was nine, and we were doing the Georgians at school, so we stayed in Bath for the October half term (yes, my parents really were that good); and the second time was four years ago when it was my family outing of choice for my birthday. On both those occasions, they had the same super-wide court dress. 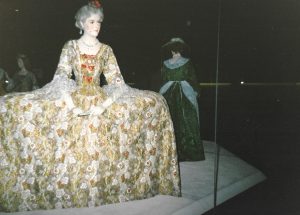 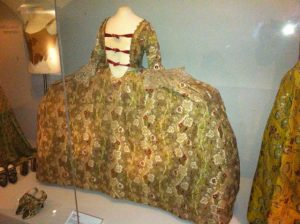 I kind-of missed seeing it again – I feel it’s a classic that should have been included somewhere, but on the other hand, it was refreshing to see something different. I’ll admit, I was a bit confused. The newly advertised exhibition, ‘A History of Fashion in 100 Objects’ made me think that this was an addition to the usual displays, not a replacement of it, and it wasn’t until I reached the end that I realised that what I was looking at was the 100 objects. I liked it a lot. I think we had less to look at than before, but what there was, was more interesting. There was more history and less recent twentieth century designer stuff that I’m not all that fussed about. 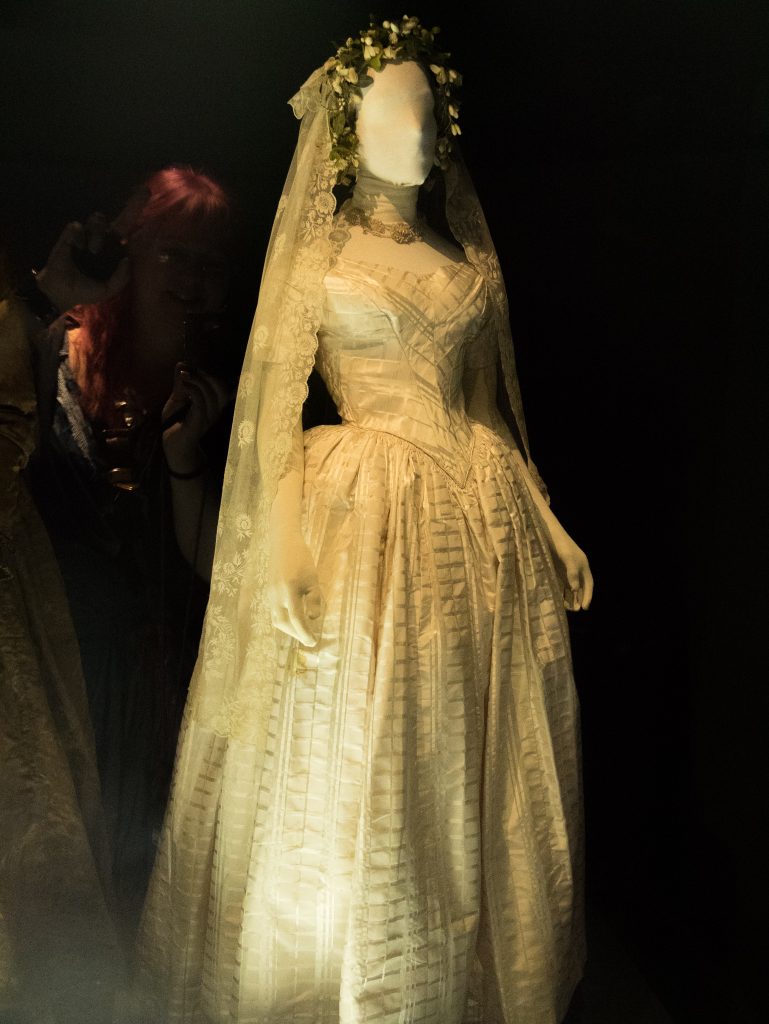 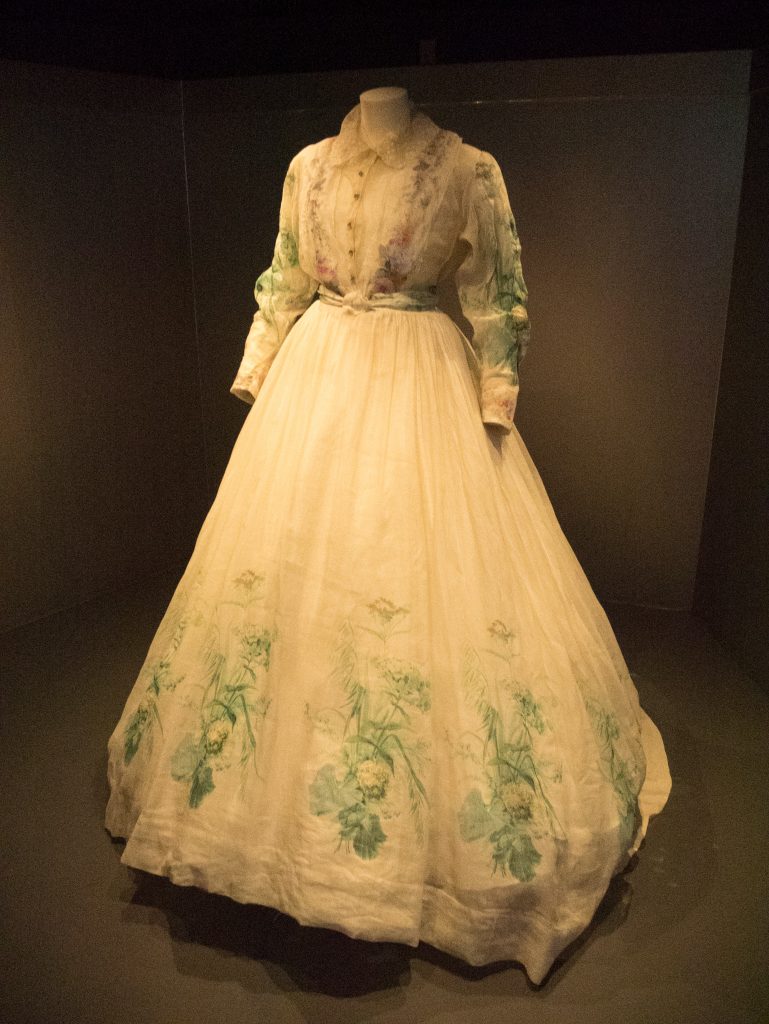 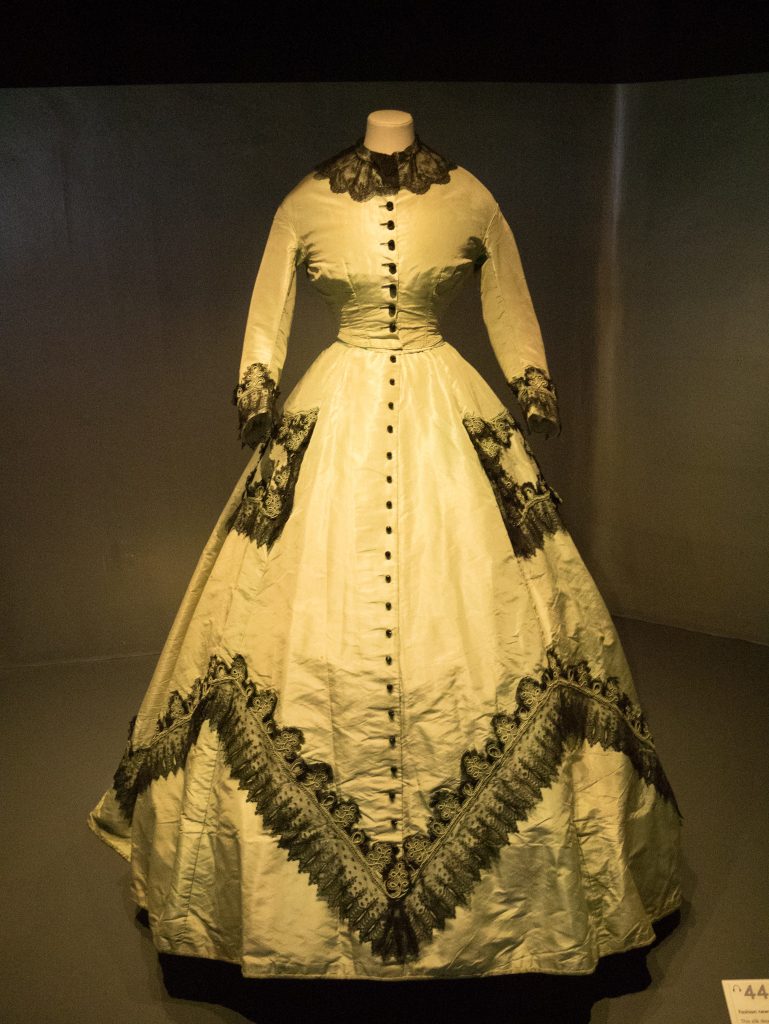 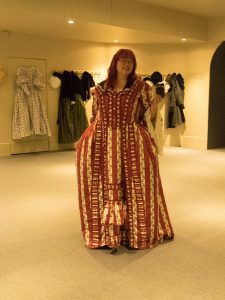 Despite my confusion – I loved my visit to the Bath Fashion Museum. I’m absolutely in my element there, and could spend a very long time just gazing at the beautiful dresses. I like the labels – they give just the right amount of interesting information, and if you’re thinking of going with kids, there are a few activities as well – the most fun of which is trying on historical costumes. If you’ve been to the Fashion Museum before, it’s definitely worth going again to see this exhibition, which is on for another couple of years.

It’s also worth mentioning that the museum runs several ‘Twilight Talks’ that look so interesting. Bath is a little far for me to just pop out to, but I am very tempted by the Worth Paquin talk as the House of Worth is my all-time favourite fashion label. If I find myself unable to sleep; I sometimes pick up my laptop, type Charles Worth into Pinterest, and after viewing wonders for a few minutes, can drift off into dreams of lace and embroidery and bustles! 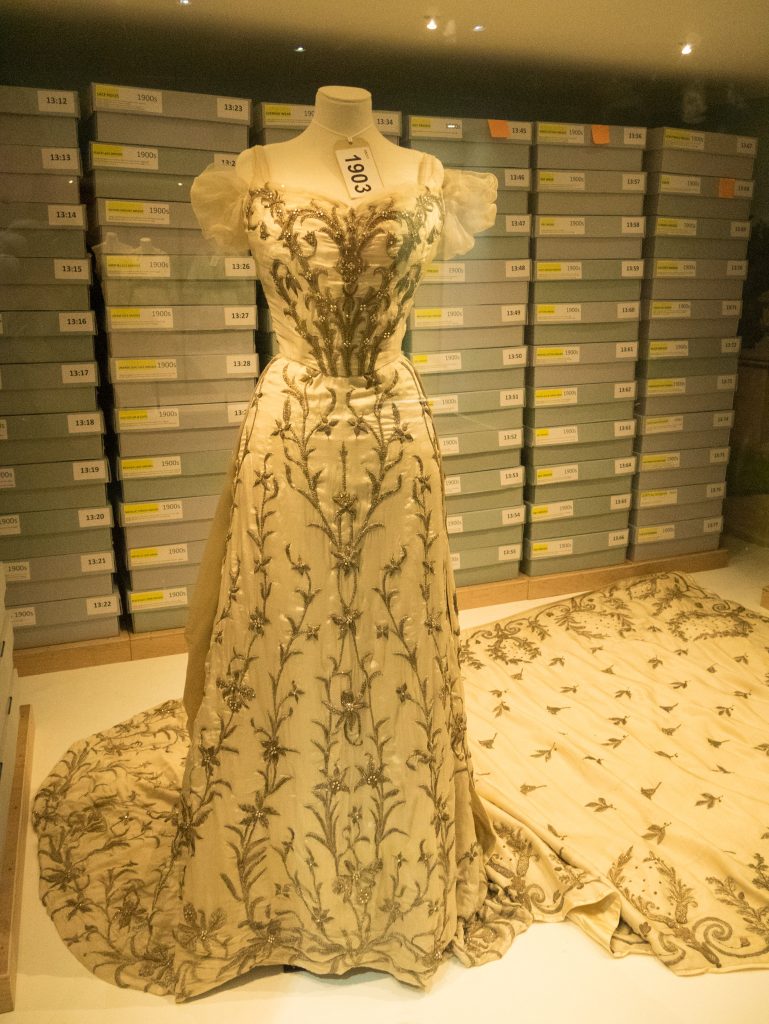 House of Worth gown

Anyone can make an appointment to see the other dresses in those boxes. I’m tempted to do any kind of fashion course just so I have a reason to do this! 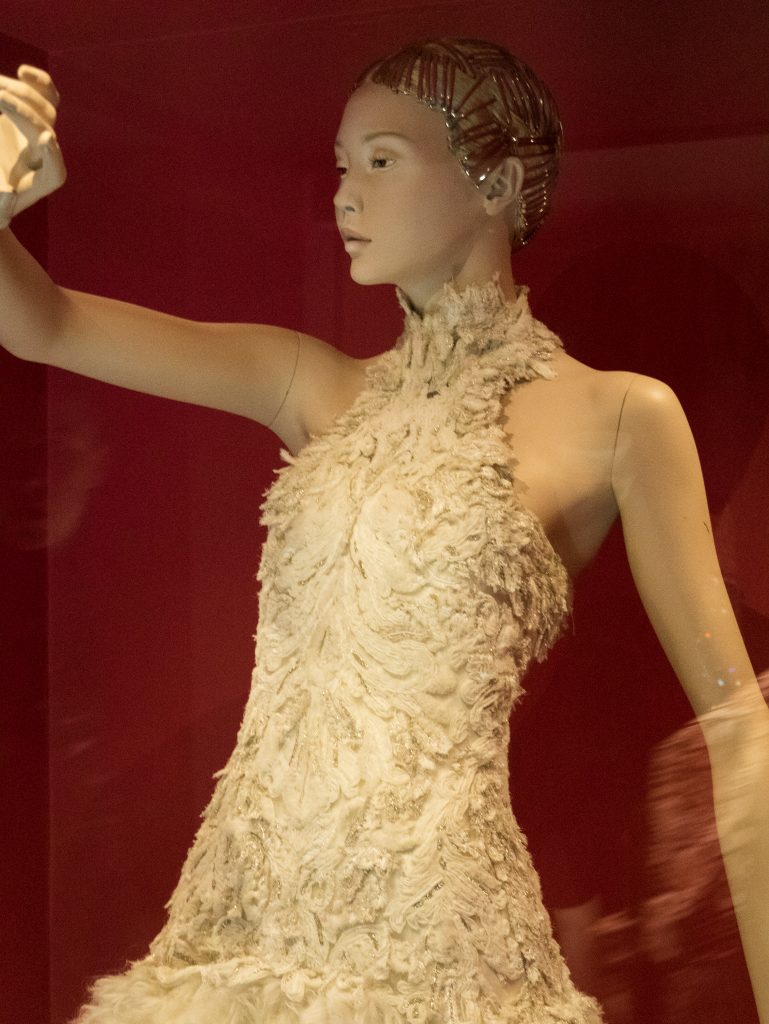 If I had to pick a more contemporary favourite designer than Charles Worth, then Alexander McQueen would be it. I was gutted not to be able to see the exhibition at the V & A museum, so at least I’ve been able to see one of his dresses up close. The detailing is stunning!

Do you have a favourite era for fashion? If I was forced to choose, mine is the 1880s.