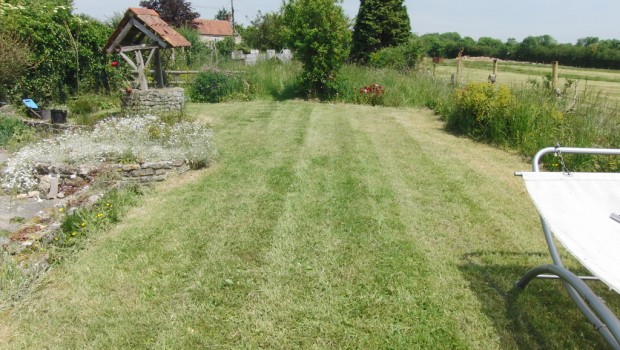 I’ve got a gardener don’t you know!

Well, either the wind or the rain prevented me from mowing the lawn before that hot spell that’s just finished. The last time I did it, I said to my husband, ‘I think we’d better start saving for a new mower’, and about half an hour into the job on last week, a flaming rubber bit flew out of the bottom of it and then started to make horrible crunching noises. Basically it’s had it. It’s a shame, because it was a damn good mower and I’ve had it since my Granddad gave it to me for a wedding present 13 years ago.

A decent mower good enough for our large garden will cost something close to £200, so I’ve taken the easy option and phoned for the services of a local person advertising in the parish magazine. He charges £14 an hour and he came and looked around the other day to see what’s what. It turns out we can see his flock of sheep from our house!

When my daughter realised he was actually going to mow our garden for us (not fix the mower like she first thought) she said it will make her feel posh seeing someone else doing it. I know exactly how she feels. I do feel weird about it; but I think I could get used to it! It was quite nice asking someone else; ‘Oh while you’re here, could you also strim the weeds on the the hard-standing area, and could you also cut the hedge.’ I’m tempted to ask him to weed the flower-beds too, but I think that’s going too far!

I want an odd-job man too. One day (when enough of you have clicked on the google-ads so I’ve earnt a little bit of money from this) I’d like someone to come round once a month to put up my shelves or the towel rail that’s been sitting in the bathroom for 6 months, or the notice board that’s been leaning against the wall for 9 months. Ah well one can but dream!