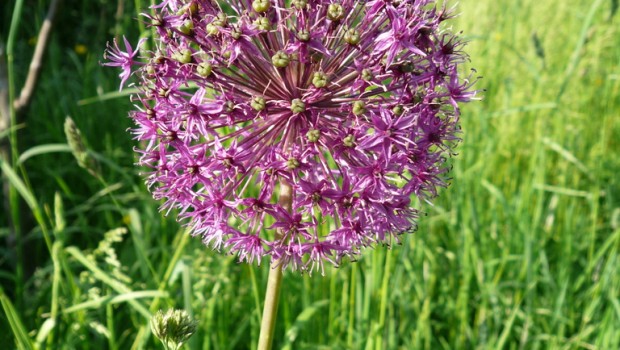 At the end of the top garden which now has grass at shoulder height.

I haven’t left it entirely to nature. There are many early spring bulbs (though little success this year – I’m hoping will improve with time), and I planted 200 allium bulbs as well, which are just finishing. I think less than half actually flowered, but the big purple ones looked fantastic. There were many more, shorter white alliums, that unfortunately were just swamped by the grass so didn’t get the exposure they deserved. I’m disappointed at how short a time they flowered for, and I don’t think there’s anything to replace them. I planted those poppy seedlings around, but who knows if they’ve taken. I also sowed a couple of packets of Mr Fothergill’s wild garden seeds earlier in spring, but there’s no evidence that they’ve grown either.

So I’m in two minds as to what to do. One minute I think the whole area just looks like a mess, the next, I’m watching all 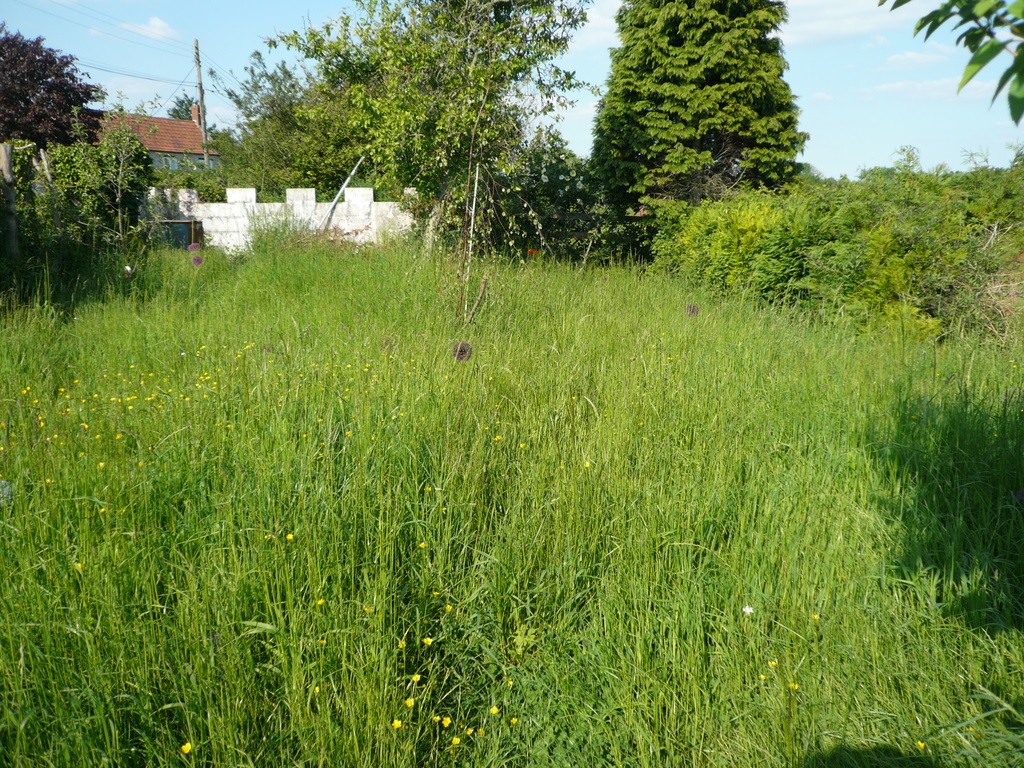 the grasses swaying in the wind and I think it looks lovely. It’s funny, since I took that photo just a week ago, the grass has changed colour and now looks more purple with all the seeds on, and it looks even nicer when you’re standing in it, but even more of a mess when you’re looking at it from the rest of the garden.

I could start again in autumn, skimming off the entire turf and seeding it with wild flowers, but then I risk the bulbs getting dug up with it, or lacking in sufficient soil coverage.  I just wish the grass wouldn’t grow quite so much! It’s probably the grass’s fault that none of the seeds or seedlings have grown. You can’t even see where the tree-trunk stepping stones are, and if you tread in the grass, you’re more than likely to tread on an ants’ nest. (I’m sure all the the ants in Somerset live in my garden. And all the slugs for that matter.) It towers over my fairy statues and the troughs I’m using as mini-ponds, and blocks the light from the small evergreens I’m trying to grow next to the road.

Well I suppose I don’t have to decide yet. I’ll leave it how it is for now, and in autumn I’ll strim it down and decide then. Perhaps I’ll skim off small sections of grass and plant seeds in those.

Aliums are my favs, they came up this year so well that my neighbours commented on them 🙂