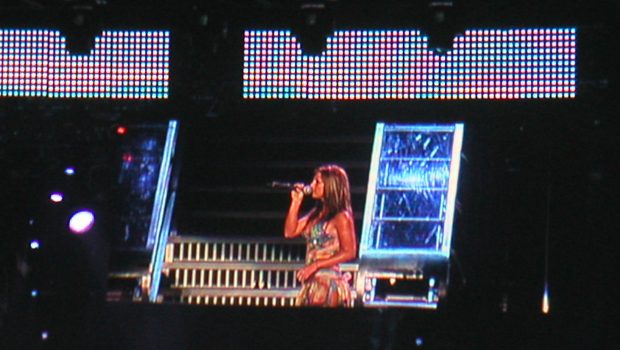 
I went up on the train yesterday with my two daughters, all of us really excited to see Britney. Unfortunately we got soaked in a storm in the walk from the station, and the supports acts were completely shite, so we were ready to go home before Britney eventually came on stage! And when I say completely shite – that’s honestly no exaggeration. First of all we had Will Smith’s wife who went on about faith and a woman’s body being a temple, and tried singing gospel/r&b to rock guitars. Thank god she only sang 3 songs. Then we had some guy who I’ve just found out is from NSync, who was just embarrassing himself. His 4 dancers were the best thing about his act – they were fantastic – just a shame they were dressed as tarts and had been told to fawn at the singer like he was actually sexy or something. He was a one man boy band with crap little dance routines and totally crap songs.

Eventually Britney came on stage to Toxic and my kids woke up and we all danced. It was altogether an amazing show – it was full of energy and really exciting to watch, with loads of flames and lights and fancy techie stuff.
She came to the front of the stage and made a joke about marrying one of the cute guys in the audience – but collectively no-one seemed to pick up on it. All the controversial rude stuff mentioned in the press happened in only two songs, out of the hour and half set; but it was rude! For Touch of my Hand, she wore a skin-tight sparkly body-suit, and proceeded to do exactly what the song says in a see-though bath! All the while, there are two beds on the stage below her with a brave male and female dancer each doing the same thing and simulating orgasms. I’ve never seen a wank look so delicate! Following that, she changed into sexy pink frilly underwear for Breath on Me, and got into various sexual positions with a guy whom she also had a full-on snog with. I admit, I was a bit surprised to look right and see that a girl had joined the girl, and a guy had joined the guy, and each gay couple were pretending to have sex. There was a definite atmosphere of the audience feeling horny (and perhaps a little embarrassed to be) at that point. I couldn’t help but think of Madonna’s past notorious tours, but as most the crowd were probably between 14 and 22, they may not have got the similarity. My two thought the rudest bits were when Britney took off the bath robe and when she kissed the boy. The rest of it passed them by. 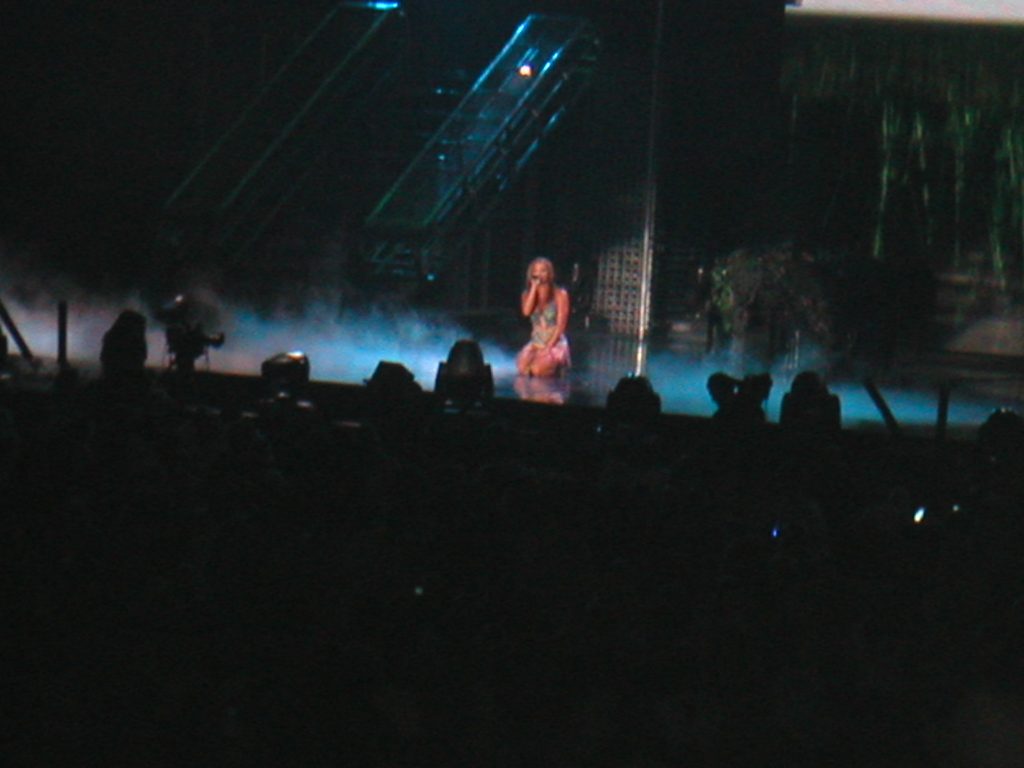 I gather some places are saying that she mimed most of the songs – well, yes, I think she did, but have any of them tried to dance that fast and sing at the same time? When I saw her last time, 4 years ago, she did the same thing, but I wouldn’t mind having less sung live and seeing more dance routines to be honest! She worked hard and was really sweating, but whenever the songs were slower she sang live, and sang really well. She mentioned the difficult year she’d had in the press, and her rollercoaster highs and lows. Then she sang Shadow, interestingly her favourite song on the album and sounded very much like it was about Justin. And I’m pretty sure she was actually playing the piano for some of it .
I loved the outfits she wore, I loved the choreography; the only thing I would complain about is the very annoying fat purple camp guy who was used to fill in time while Britney got changed and got her breath back. We understood that he was meant to be evil, by his pantomime baddy laugh, but I really didn’t get the relevance to the hotel theme. I would have rather watched an empty stage than him.
Altogether it was a great concert and I’m so glad I managed to get tickets. A word of advice if you’re going to see her: she always thanks the band, says goodbye and I see loads of people rush off, but after 5 minutes of everyone screaming and stamping, she comes back for one last song.

Hi, this is a comment.
To delete a comment, just log in and view the post's comments. There you will have the option to edit or delete them.