The Honeymoon Chinese Restaurant in Tonbridge 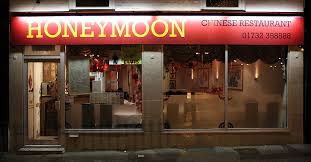 It was our night out with the Mums from my daughter’s class at school.

Oh my God, exactly how many courses were there? The set Christmas meal cost £18.95 and you certainly get your money’s worth! We had at least 4 starters before the main meal! And all of them were delicious. I’d tell you what they were but there’s no way I’m going remember all that! One portion was aromatic duck with pancakes, and that was gorgeous. Nothing tasted like anything worrying, which always worries me at a Chinese restaurant! The service was friendly and well paced and the new refurbishment is very stylish.
I would heartily recommend this place for a meal out, but I do have a couple of complaints: Being in a large group (11 of us) we all had to put in our cash and carious credit cards and work out how much wine we’d had to drink etc; so it was quite a task for our group elected social organiser(!) to work out that she had enough to pay with. It was all sorted, and she took it over to pay, only to be told we were £27 pounds short. At first we paid it. Then, she thought – no, I worked it out, and went back to look at the bill. It seemed ok. Then a minute later, the manager asked to see her. It turned out, they had added £27 gratuity! And it said optional; but they had the cheek to ask for it, saying we hadn’t paid enough!! So if you are going there – keep a firm eye on the bill when it comes!
The other thing, is they had a singer. Now, the singer guy was remarkably good. Never went wrong or sang a flat note – you would have thought you were listening to a famous and very rich singer. He also had a very good repertoire with well known classics mixed in with a couple of Bob Marley and Robbie Williams. All very nice and good if you’re sitting near the windows at the front. But he was standing about 3 metres behind me and it totally spoilt my evening. I find it very hard to listen to 2 things at once and I missed out on so much of the conversation because of it, and I left at the end feeling like I was really miserable for not joining in much.