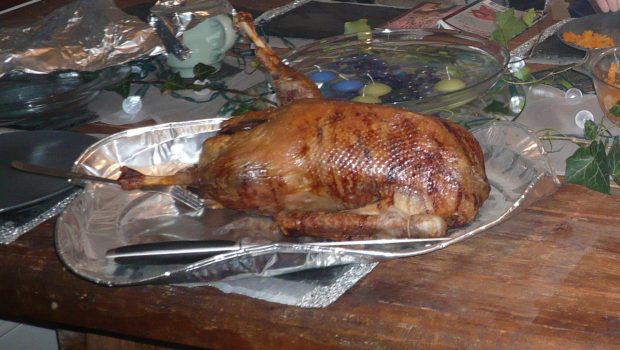 “The secret of a properly roasted goose.” That is a quote from a muppets Christmas Carol, but Miss Piggy was talking about turning a spit; which I didn’t actually do!

Anyway, I’ll get to the point; I had goose for dinner yesterday, and whenever I mention it, it arouses interest; so I thought I’d tell you about it!

This year, I had Goose for dinner, and people have been so interested, that I thought I’d tell you about it too. Well, it was absolutely delicious! Probably the nicest meat I’ve tasted – very similar to duck actually. Why on earth do people still have turkey when it’s the dryest, most difficult meat to cook there is?! And not particularly tasty either. I’m seriously never going to have turkey again. So now you know!

Now- where to get it. Unless you want to spend about £50 for one from your nearest goose farmer (Well that’s how much it was at mine – though you did get to pick your own goose if you wanted.) the only place I’ve found it was in a large Tescos, made by Bernard Mathews. My only concern was that it didn’t say it was free range. Maybe that’s me being stupid – do you get battery geese? I hope not. Anyway, it cost £25; £7 more than a free range turkey of the same size; which I thought was ok. No one should be buying battery turkeys still anyway. My ‘medium’ bird would feed 6 hungry people easily. I have a rather large tub of leftovers in the fridge!

It is quite fatty, so cook it on a rack over the tin, and drain the fat out a couple of times during cooking. Jamie oliver bought his goose fat from a tin for his roast potatoes, but I had some for free! It did make my potatoes taste lovely!

I made up my own gravy recipe to go with it. So copyright of Helen Hobden, here it is: While your goose is standing, covered in tin foil and a tea-towel to keep warm, but on the draining board to make cleaning up easy; keep 2 tbs of fat from the goose in the roasting tray; add about three quarters a pint of water, sprinkle over about three quarters of a tbs of chicken gravy granuels, add half an sliced onion and half a chopped cooking apple and stir every now and then for 20 minutes. Oooh and that was delicious too! But that was only for 3 or 4 people, just add more for more people!

Harry Potter and the Goblet of Fire

then he ate my boy entrancers