How to learn to Surf 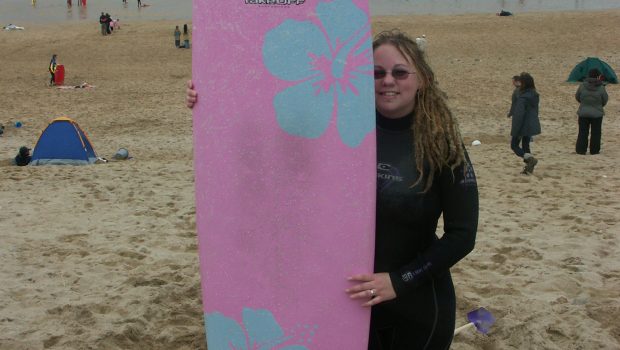 By someone who remembers. These are a few words of help and advice if you’re planning on having a go at surfing. I’ve seriously got the bug, but I’ve only had the chance to go a few times so far, so I hope you live a little nearer than me to a good surfing beach!

Firstly and very briefly: you don’t need to buy anything. Hiring a board and wetsuit is pretty cheap. Also; take one lesson. You’ll do “paddle paddle paddle; up!” and then be left to it. So don’t book more lessons as after that it’s just up to you to practice. These are just some tips – I won’t try and teach you to surf here.

There are a certain few little bits of knowledge that the books and dvds forget about so here’s my advice if you’re interested in learning to surf. The first thing is; go in the Easter bank holiday if you can, instead of summer, as the waves are much better and much less crowded with surf schools. I’ve just been and I swear I was much warmer this week (middle of April) in a winter wetsuit, than I was last year at the end of August in a summer one. But make sure you get boots; and gloves as well if you’re any earlier in the year.

If the man at Surfer’s

Paradise in Newquay says you need a wetsuit one size smaller that your usual size, be suspicious. I’m suspicious because that’s what I was told last week, but I was too excited at the thought of wearing something one size smaller than usual, it didn’t occur to me that they didn’t say that to me last year when I hired a suit from them, and that they’d just been worried that they may have run out as they’d been busy! Anyway, you don’t want to do that because it literally took me half an hour to get into this wetsuit; which leads me to say, if you’re getting changed into it in the car park; if you can get away with it, wait till you’ve finished getting it on before buying your parking ticket – it will honestly save you half an hour’s worth.

But best of all, get changed in the caravan/apartment/hotel where you’re staying, because if you’re anything bigger than a rake, squeezing flabby bits into a skin-tight wetsuit is not the most desirable situation to be in when you’re in a car park surrounded by gorgeous, incredibly fit surfer boys.

(Getting out of the wetsuit is even harder. Really, the only way to do this with any decency is in a toilet cubicle. The ones at

Fistral Beach are clean enough, apart from the floor which is wet and sandy – so take a plastic bag to lay out for putting on your dry clothes. Or take bin bags to protect your car seat while you get back to where you’re staying, (my preferred option). Also, don’t make the mistake of pulling the wetsuit down both arms thinking that might be easier. Wait till you’ve got one arm completely out before working on the next arm otherwise you’ll get stuck like in a straight-jacket and will need to find someone to help get you out!)

So; next you need to hire a board. Unless you’ve got a van or a good roofrack system with straps, only do this on the beach, as the beginner’s boards are bloody heavy. And you WILL need a beginner’s foam board; you’ll regret it if you try even a minimal straight away. If you’re with a friend, have one of you at the nose of the boards with one under each arm; and one of you at the tail doing the same.

If you’re by yourself, take a walk to the water carrying your board and if it’s anything other than high tide, sit down and have a rest because by then you’ll be knackered. Look for where the waves tend to be breaking while you’re there.

Tie your leash to your back leg facing outwards, and pick it up while you wade out in the water or you’ll trip over it. In your lesson they’ll tell you to walk out with the board facing out to sea and when you see a wave coming, turn it round. Bollocks! The wave will always reach you while the board is in front and smack you in the face when the wave comes. So I wade out with the nose already facing the shore so I’m ready to jump on – big waves can pop up right in front of you with no warning.

Forget anything you’ve heard about duck-diving; paddling out in channels between sets etc; the most you’ll be doing in at least 2 weeks is wading out to waist deep. That doesn’t sound like much, but often when I’ve been going the waves have been crashing over my head at even that deep and that’s pretty scary at first.

When you’re walking out through crashing waves, don’t forget to jump. And jump sideways so they hit the narrower part of you body and don’t knock you backwards!

When you’re absolutely exhausted and all you seem to be doing is falling and walking through water and never standing on the board: think of the calories. It’s still way more fun than going to the gym! And when you stand up on the perfect wave and go rushing into shore; it’s all worth it.

Cath Kidston gift ideas for Mothers’ Day
I was given this beautiful set of Cath Kidston hand creams and a lip balm for my birthday last year, and it occurred to me what a lovely gift anything by Cath Kidston would be for Mothering Sunday. Her products combine the two things that make the perfect present – something pretty and something practical….

Be In The Place Visit