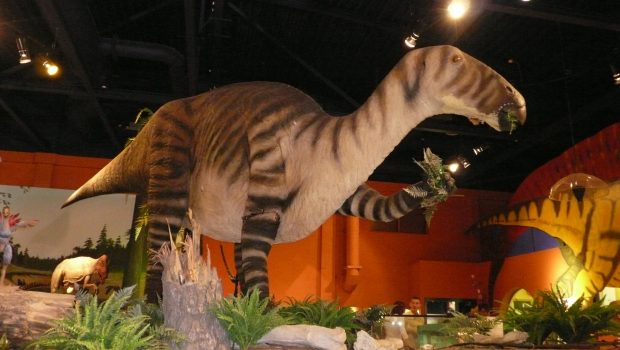 A museum at Sandown on the Isle of Wight

We were really impressed with this museum – if your kids have even a small interest in dinosaurs, it’s worth a visit. At first I was a little worried because the first room you walk into is mainly pictures with boards of written information, so I would recommend picking up the quiz designed for school visits as it forces you to read them. There are cabinets of locally found fossils and a large underwater sea display which was good. Then you walk into a room that’s full of things to look at and little activities for the kids to do.

It was very much geared towards children with plenty to keep them amused; buttons to press, controls to activate; flaps to lift and a big sandpit with a dinosaur to excavate. It was fascinating as well because there was a room next door that you couldn’t go into, but had a glass wall, so you could see the paleontologists at work. They had bones on display that they were still trying to identify.

We’ve been to the Natural History Museum many times, and done the special dinosaur exhibitions, but this museum, although obviously had a far smaller budget so the models weren’t as impressive; was better because everything was so local. The models were of dinosaurs that actually lived there on the Isle of Wight, and the fossils were found by local people and by tourists on the actual beach outside, and at nearby beaches. There was a certain thrill about that. There was plenty of information about the archeology and discovery of the bones and I’m sure you’d get hours of peace on the beach afterwards while your kids picked up every single stone to see if there was a fossil on it.

A family ticket was £13.50; plus a pound for parking. We were in there for 2 and a 1/2 hours, and could have been a bit longer if we’d stopped to read more of the display boards. I thought that was pretty good value for entertainment time! Incidentally, we bought a combined ferry plus attraction ticket, so our entry was almost free – a very worthwhile option.

The Mill Hotel and Restaurant Review