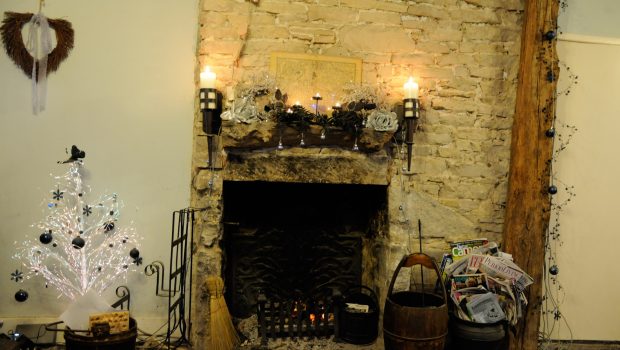 I discovered this sort of information hard to find, so here it is for you.

I’m no expert, but since we first lit the fire in the living room a few months ago, never having had one before, I have learnt a lot. Firstly, if you want to keep warm – get a wood burning stove. In hind sight, as I sit watching the snow gusting almost horizontally outside, this is what we should have done. Our living room temperature has now descended to 9 degrees Celsius and of course I blame my husband. Before we moved I told him that all the advice points to getting a stove and that over 90% of your heat from an open fire goes up the chimney, but he insisted that a proper fire is so much nicer. So it’s all his fault that we’re freezing.

However, it’s not as easy as all that. With a wood-burning stove you need to have the chimney lined apparently, to prevent chimney fires. As not enough heat goes up, all the crap that goes up there never gets burned off. We may have risked using one for these colder months without doing all that, if we’d found one cheap enough. But now it doesn’t seem worth the money – it surely can’t get worse than this?? By next year we will have installed central heating and an open fire will be lovely to give us that extra tiny bit of warmth, and is really just nice to look at. If we weren’t, then we’d certainly make the investment of a wood burning stove – everyone says how fantastic they are.

Don’t be too put off from our experience. If you have a small cosy, well-insulated room and a couple of armchairs right in front of the fire – then it’s probably fine. Unfortunately, we’d just opened up 2 rooms to make one large one; there is no door leading to the kitchen, and worst of all, the stairs are in the room. If you sit half way up the staircase, then you’ll be lovely and warm. Washing dries  very quickly, hung over the banister. Most of the heat escapes up there.

So anyway, first of all (after removing the horrible beige tiled fire surround, spending days bashing out all the infilled brick and concrete), my father-in-law swept the chimney for us. This is important as otherwise carbon monoxide poisoning is a risk, as are chimney fires. We are quite happy for him to do it, as he’s swept chimneys many times before, but all the advice is to get a professional. Well, as far as I can see, it’s sticking a brush on a load of rods up a chimney and hopefully he can teach me how to do it in the future. Otherwise it’s about £300 each time. Quite a lot of soot came down. He did a pretty good job at catching most of it, and anyway, there was dust everywhere still from knocking the wall down, so it didn’t matter. In my study though, the soot seemed to spread everywhere, and it’s really difficult to clean – most of the time you’re just wiping it around rather than wiping it off.

We kitted out the fire from Wells reclamation yard. We bought a fireback and fire basket. Neither were cheap, but still loads cheaper than the second hand (or “antique”) ones we saw in the shops in Tunbridge Wells before we moved. It was a while ago now, but I think the lovely fireback, carved with an oak tree was about £150 and the basket about £50. We also bought an iron log  holder thing with a set of poker, brush, ash scoop and log grabber things that hang from it, for £35. And a wooden bucket for our kindling (£30) and a bigger wooden bucket which holds an emptied bag of coal (£40) I bought a small black metal coal bucket from e-bay for £12 which I use to put the ash in each day. A couple of times a week I empty it in the compost heap.

The logs you burn are supposed to be important, but as my Mum pointed out, in her day they burned anything – even painted wood without getting poisoned. It is worth investing in storage space if you haven’t got enough, and getting it delivered in bulk. The stuff from the garage is always damp and difficult to burn. I also worked out our first delivery cost half the amount if would have if bought in small nets. I’ve had 2 deliveries so far, from different companies, which I shall be reviewing shortly. They were both very different from each other. We also cut down loads of conifers when we moved, and again my father-in-law was of great help cutting them up with a chainsaw. Most of it is in the back of the wood shed drying out for next year, but when we started running out of the bought stuff, we have used some already, mixed in. We put it next to the fire one night to dry out further, and then burn it the next.

So this is how we get a succesful fire burning: First I cover the bottom of the firebasket with scrunched up newspaper – about 7 pieces. Then I put a couple of big logs on one side. I put about 2 handfuls of coal on top of the paper, close to the logs. Then I put a couple of handfuls of kindling wood (bought from the texaco garage (cheaper than Tescos) as it burns for much longer than gathered from the woods) on top of the coal, leaning against the logs. Then I put some cardboard on top of that, and then about 4 split logs on top of that, all propped up by the big logs on one side. Much easier than trying to balance a pyramid. This gets the fire going really well.

When it’s died down a bit, give it a poke around and stick a few more logs on top. There you go!

I cant believe £300 for a Chimney Sweep, i just had mine done (first time in at least 3 years) and paid £40 for a professional job well done. My sweep used an industrial Vacum cleaner with Hepi filters – not a single grain of soot dust anywhere on my cream carpet or walls and all done and dusted in 30 minuets – magic 🙂