The Curious incident of the dog in the night-time. 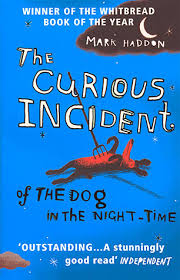 Written by Mark Haddon, published by Doubleday in 2003 and winner of various prizes. Here’s my review…

This is a wierd one this is. I haven’t really come to a conclusion about whether or not I liked this book. I would probably recommend it though, because it was so interesting. Entirely written through the eyes of a fifteen year old boy with asperger’s syndrome; he sets out to detect who has killed the dog of the lady who lives opposite.

In his quest there are several mysteries to discover and solve, so for much of the book, there was enough suspense to keep you going and look foward to picking it up again, however, after reading the first half, I started to skim over the paragraphs where the main character, Chris, goes through his mathematical problems.  It was so fascinating seeing the world, very convincingly from the perspective from someone with this illness. It seemed to me to be well written, but having no experience with asperger’s syndrome, it’s difficult for me to judge.

There did seem to me to be a couple of gaping holes in the plot that I struggle to get past: Without giving anything away; I didn’t feel the person who killed the dog, had a good enough reason to do so. It was a really violent act, and I don’t think it was true to the character who did it, and the reason was glossed over really quickly and was insufficient. Also, the fact that the very same person gave Chris a dog at the end of the book and he wasn’t worried at all that the person wouldn’t kill this one as well? Maybe Mark Haddon meant this as a sign that Chris trusts that person again, but considering his reaction when he found out who killed the dog, I just didn’t buy it. So that completely spoiled the end of the book and when I finished it, I was left feeling rather flat.

Which is why I still haven’t decided whether or not I actually liked the book. I’d probably recommend it though because it’s such an easy to read, short book (lots of pictures, double spaces and gaps between paragraphs and chapters!), that at least, even if you find you don’t really like it, you won’t have wasted a lot of time reading it!

Good things come to those who wait