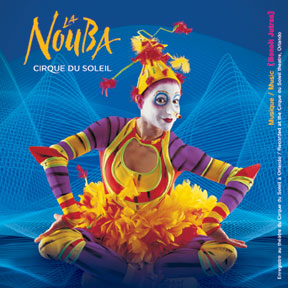 Again, thanks to The Dibb, I got a tip about a special offer if you signed up on the official cirque du soleil website to receive news from them. I think it reduced the price of the tickets by 25%. So, this is a review of the show and whether I thought it was worth it…

I was quite concerned about the money we’d spent on this show. It was £150 for 4 adult tickets (A 12 and 15 year old count as adults everywhere on holiday unfortunately), which does sound a lot, and was our big indulgence of the holiday (But in comparison it also cost £150 for one adult, 2 children to see the Dirty Dancing tour in Bristol, which puts it into perspective), but by this time we’d seen so many half-hour circus shows at all the theme parks, I was worried that we’d seen enough to last a life time and we didn’t need to spend any money at all on an extra show after all. Oh no, oh no! I needn’t have worried at all. The theme park shows are impressive, but they are nothing in comparison to the cirque du soleil. Nothing at all!

No matter how much I type here praising this show, it will never do it justice – it’s the sort of thing you just have to see for yourself to believe how amazing it is. There is an expression ‘Jaw-dropping’, which I assumed was simply an expression – I’ve never, as far as I can remember, actually let my mouth hang open because of what I’ve seen. That is, until I saw La Nouba. About half an hour in, I realised I’d been sitting there with my mouth wide open the whole time – it was a good job the audience was in darkness!

There was some sort of story to the show, which I didn’t quite manage to follow – perhaps we should have bought a programme, but there was some sort of love story as there was definitely a marriage at the end. There were various different traditional circus performers – so there were a couple of clowns (who entertained us by being silly while we waited for the show to begin as people took their seats); tight-rope walkers; acrobats; trapeze artists; a juggler; diablo performers; gymnasts and a strong man; as well as several other strange and wonderful characters. There were some very bizarre elements, such as a massive troupe of people in an old-fashioned grey uniform, marching on and off again or standing spookily still in the background.

One of the performances near the beginning were people lowered gradually from the ceiling with a suspended doorway, and they did all kinds of acrobatics, hanging by their feet, swinging off each other and things, and they had no net, no safety wires, no nothing! And the ceiling was a good 40 metres high I’d say. Just incredible. The choreography of all the gymnastic bits was so clever and intricate and no-one ever made a single mistake. The only mistake was on a trapeze act when a man was trying to perform something so difficult and with so much swing behind him, the other guy just couldn’t grip his hands for the catch. They tried twice, but couldn’t do it, though the audience cheered for them anyway. The timing for this show was so….so….I can’t think of the word that means accurate and essential to get right. They were flying, somersaulting and catching all over the place – my heart was beating so fast for them! It was about the only act that did have a  safety net. The high wire act had two people doing balances together, and only one of them had a safety rope, so the other one was relying on them to keep hold. It must really focus the mind.

The stars of the show, without a doubt were the diablo performers – look them up on You Tube, there must be something there. There were three of them, about 7 or 8 years old doing incredible gymnastic routines all round each other and never dropped their diablos once. They started off astonishing and just got more and more so, the routine getting more difficult and each working 3 or more diablos at once. Utterly astounding.

Also, throughout the whole 2 hour performance, there was a live band and opera-style singing to accompany the action on stage. This was a show in itself and they were brilliant. The stage designers and builders deserved their own round of applause too for making such a wonderful set. There were moving pillars going up and down all the time, areas of floor that suddenly became trampolines and at one point an entire block of flats rose from the stage!

The only criticism of the show was the juggler. I find jugglers boring anyway, but why do they always insist on drawing out their routines to the point when you just want to shout at them to go away? They do the same thing over and over and over again, expecting us to be impressed when they add one more ball. Just do it once; impress us with as many balls as you can and then leave please!

A practical note: Don’t choose seats too close to the stage; you’ll be craning your neck upwards most of the time. Do choose seats at the front though, rather than at the side, or you may miss some of what’s going on.

We were talking about La Nouba the whole way home and for several days after. If you hadn’t guessed by now – I highly recommend it!

One for all and all for one, muskehounds are always ready…