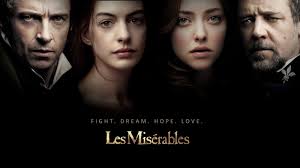 Unfortunately we had to eat several packets of minstrels last summer in order to save up enough packets for the ‘Sweet Sundays’ free cinema tickets. We managed it though, and last week used our free tickets to watch Les Miserables…

It was absolutely amazing! I was completely and utterly blown away by it. Yes, it is rather long, and rather miserable (the clue is in the title), but the acting was outstanding and I was fully drawn in to the story.
Many many years ago I was a member of Kent County Junior Choir and when I was about 12 I was on a residential course where we learned several of the songs of the musical and I fell in love with them. I bought the cassette tape afterwards and listened to it over and over, but I’ve never actually been lucky enough to see it on stage. So any comparisons I make are with the tape I had, and more recently the download of the stage show – I’ve no idea if the singers are the same.
I cannot express how impressed with Anne Hathaway as Fantine I was. I think her version of I dreamed a dream is quite a lot better than the stage version, and I’d be surprised if anyone in the cinema had a dry eye by the end of her song.
Hugh Jackman’s acting was brilliant, and his singing was fine. I can’t help thinking that his role should’ve been taken by a singer who could act, rather than an actor who could sing. He and Eddie Redmayne (Marius) had a habit of not quite hitting the note dead on, and trailing off slightly flat at the end as well. To be honest the imperfections of the singing were ideal to prove that they were singing live at filming and definitely enhanced the gritty realism of the film.
After seeing Samantha Barks on Andrew Lloyd Webber’s search for Nancy for Oliver, it was great to see her as Eponine and singing an amazing On My Own.
I’ve never really been a fan of Russell Crowe, and I can’t say this film changed my mind. The children were fantastic; as were Sacha Baron Cohen and Helena Bonham Carter as the innkeepers. Their main scene was superbly choreographed and so funny, and their appearance every now and then throughout was lovely light relief.

Don’t go and see this film if you don’t like musicals! The trailer is a little bit deceiving and I think contains all the spoken word in the entire film. All conversations are done in song, and I was a little bit worried at the beginning that this was going to be irritating, but once you’re past the first exchange between Jean Valjean and Javert, it’s fine. To be honest, I can’t wait to see it again.

Let’s do the time warp again!