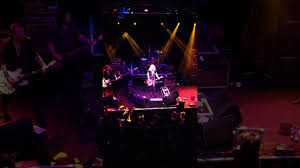 I am playing all my Hole and Courtney Love albums again, and I’m even inspired to get out the electric guitar and have another go at trying to learn how to play it! As we queued at the O2 Academy in Bristol last night, we realised it was twenty years ago when we first saw Hole play at Reading festival in 1994. Well, that made me feel flipping old! The crowd was a real mix, and there were plenty of people older than Chris and me; along with teenagers who have discovered her music later. Our kids were brought up listening to Hole, so they came along too – well it was actually them who new she was touring here before we did and asked to buy tickets…

So, anyway, we watched White Miles, the support act (I’ll do a review of them later) and we weren’t left waiting long before Courtney Love took to the stage with her band. I’m pretty sure one of the guitarists played in her “Hole” tour in 2010, but I’m not certain. (Inverted commas there due to the fact that it wasn’t Hole, it was Courtney Love and a band with no other members of Hole.) They seemed to have quite a bit of sexual tension between them and he often whispered in her ear. At one point she cracked up laughing at what he said, which was funny, but didn’t explain the joke, which was a bit annoying!

Get to the proper review Helen: It was flipping amazing! I loved every second and is definitely the highlight of my year so far. She played the two new singles; one song I didn’t recognise (either from her new forthcoming album, or possibly on Nobody’s Daughter, which I haven’t listened to all that much.) and the rest were Hole classics. It was more a festival set than a gig set which was brilliant because everyone sang along to every song and there was a great atmosphere. Courtney seemed concerned we were being too reserved and quiet, but it didn’t feel like that from where I was standing. I think the smaller venue and the fact that much of the audience were on balconies above the stage meant that it wasn’t as loud for her as she’s used to. It’s good that she talks to the crowd and gets them involved.

Highlights were Celebrity Skin, Malibu, Jennifer’s Body, Doll parts…actually all of it. If I’m being picky, I do love her solo America’s Sweetheart album, but she only played Never Gonna Be The Same from it, which was a shame. I wouldn’t have wished them at the expense of any of the other tracks though.

If you get the chance to see her I really would recommend it. I was gutted she isn’t playing Glastonbury this year, but so pleased she came to Bristol as the west country is usually missed out on her tours. She belted out the songs and was full of energy and looked fantastic. At the beginning she screamed a lot and didn’t manage to the hold the notes at the end of the singing lines, but that improved as the set went on and was singing the ballads with the beautiful rocky tone to her voice.

Despite jumping higher than anyone else, I’m gutted I didn’t catch a red rose when she came back for the encore (after the costume change) and threw several into the audience.  My tiara, pearls and rock chick bracelets will now go to the back of the drawer for another time.

(Image above from David Kemp)