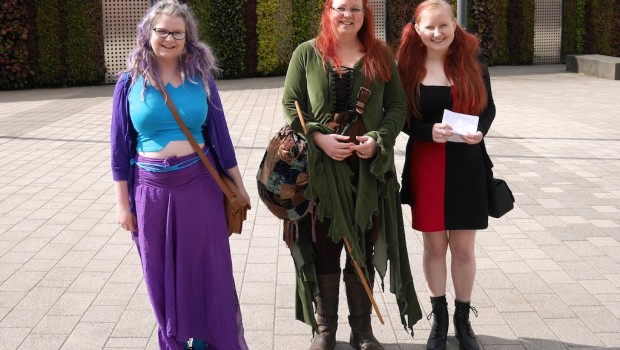 It was a bit of a drive for us, but the kids have wanted to go to a comic con for a while, so it was worth it for them. Never having been before, I wasn’t entirely sure what to expect, but costume planning was rife in our household and I went as Tauriel from The Hobbit films; Rain went as Hay Lin from W.I.T.C.H. and Jude went as Harley Quinn from Batman. (Chris won’t dress up, but did at least wear a Star Wars t-shirt.) And we did look pretty good even if I do say so myself!

If you’re not sure whether to dress up or not, then do it! Most people were. Though I’m too out of touch with the comic and manga world to recognise who most of them were supposed to be. Though you really could be anyone from film, telly or anywhere – you aren’t restricted to comics just because it’s called Comic Con! Half the fun of the event is looking at everyone else’s costumes. It’s even better when people are entirely in character and shuffle around if they’re a zombie, for example.

We spent the whole time wandering around the stalls as none of us were particularly interested in the people doing the Q&A sessions in the theatre bit and were definitely not going to spend £15 – £20 on an autograph. The calibre of the celebrities varied somewhat from Cheryl Ferguson from Eastenders to Tom Mison from Sleepy Hollow. In fact they really need to cut down on the number of has-been celebrities – particularly the ones that 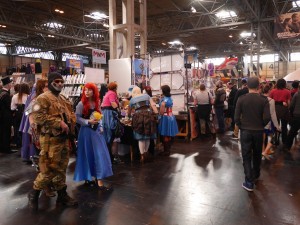 have nothing to do with cult films or comics or anything relevant. The area for their tables was huge and would be better filled with more stalls.

The stalls were surprisingly reasonably priced and there was plenty of places for old and new comics; fluffy toys; classic toys and lots of art. Disappointingly low on quality clothes and costumes though. I also thought they should encourage more hand-crafted stalls for better variety. 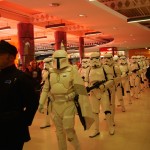 stage. It was only by chance that I caught the storm trooper parade because I’d gone out of the hall to use the loo. It was pretty impressive but no-one else in my family saw it – I’m not sure if they even went into the hall! Also, the cosplay ‘masquerade’ (I’m not sure why they call it that) was in the theatre and was a complete disaster. First of all they tricked us into a half-hour thing talking to Riva Taylor and her record producer (I think that’s who he was) ; then the compere had to stall for a while because something had gone wrong ( I wondered if the cosplayers had got bored and wondered off) and then, the whole cosplay thing was slow and boring. The compere came on stage between each and every person, when he should have just stood at the side and let there be a continuous flow of people coming on and off the stage. Whilst the costumes we saw were good; there were better from people we’d seen wondering about elsewhere. Considering that people’s costumes really were the best part of the entertainment, there should have been an incentive for more people to take part – a voucher or free drink or something – and it should have been a bigger deal in a central space for everyone to see.

At £10 each for the ticket, it was a good day out for all of us, and something a bit different too. Would recommend, but would probably only go again myself if there was someone doing a Q & A session that I particularly wanted to see.