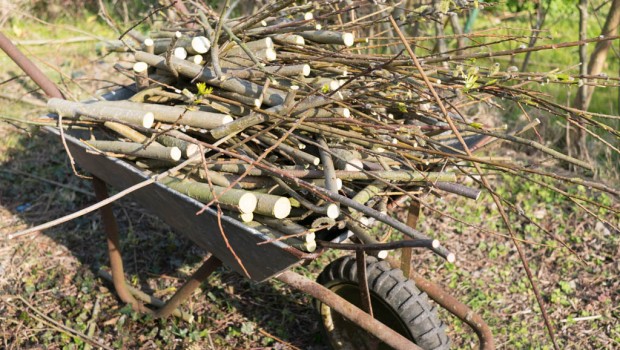 (A fedge by the way is a cross between a fence and a hedge, in case you were wondering.) You may remember (though you probably don’t) that several years ago I had the dilemma about what to plant in the lower garden in order to provide some privacy quickly. If you want a quick catch-up, the post is HERE; and then please read on for an update… 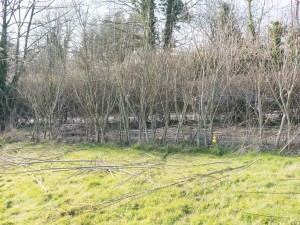 Well, straight away you’ll notice from this picture taken in March that it’s definitely more of a hedge than a fence; so I no longer give the willow the grand title of being a fedge. To be honest, it’s just a row of small trees and not really even a hedge. I just wasn’t familiar enough with willow to begin with to get this right. I didn’t even realise that wherever the secateurs went, about 6 new branches sprouted up instead of one! I just needed a more organised plan.

So, my advice if you’re after a fedge, is to plant some willow stems about a metre or so apart and keep these ones upright. Tie a bit of wool or something round these so you don’t forget which they are. Effectively, these will become your fence supports. I went wrong straight away by planting mine at an angle (half facing one way; half facing the other), but this was too tricky to manage for me. I just think it would be so much easier to have a row of uprights and then as the other stems of willow grow, you have a clearly defined way to weave them in and out.

Several times I tried bending the stems over and tying them in place, but it never worked well. What has worked well is the privacy in summer; even the lorry 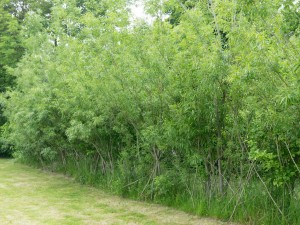 drivers can’t see over and into the garden now, as you can see from this picture taken yesterday. To be honest, even if the weaving of the willow had worked; it would never have been able to get that high to give privacy in winter anyway. Two trees fell down in the wind this winter because they’d become too thick and heavy. The soil there is barely any soil at all as the garden has basically been put over a rubbish heap. So the willow needs to be kept trimmed to maximum 6′, allowing summer growth on top of that.

Another success has been the thickening of the hedge by simply pushing the cuttings into the ground. Two years this worked and they all grew, but one year I did it in February and we then had about five weeks of no rain and they all died soon after. This year, for the first time, my prunings are being kept to be firewood. Most will simply be kindling, but some pieces are thick enough to keep a flame going for a while. I remember seeing a Grand Designs Revisited where the couple grew willow and it provided them with enough wood for their log-burner to heat the whole house. Well so far I’ve only done two barrow-loads and I reckon there’s about another seven or eight to go, which is equivalent, roughly to £60 worth if I’d bought it. Not bad I think. Worth all the time and effort though? To date I’ve only spent a couple of hours on the task, so who knows how much more time it will take to cut it all into pieces and wheel it all the way to the shed. Chris would rather spend the money than put the effort in, but if I count it as my workout for the day then it’s more worthwhile. I’d rather be outside doing something useful than indoors doing that bloody zumba dvd for the hundredth time, and judging by how hot and sweaty I got; I’d say my heart-rate was about the same!

One other thing to add: I mentioned already how I knew nothing about willow; well the rooted willow I thought I was buying and planting, turned out to be apple trees! So now we have a row of apple trees that can’t be dug up unless I want to get rid of the willow at the same time; and they are far too close together and planted in terrible conditions. I was suspicious when three years ago some sprouted white blossom in April, and by the time we had a couple of apples hanging off the branches, I was convinced. At least two are red eating apples and one is a type of crab apple. The eating apples were not healthy enough to eat, unfortunately as they grew quite shrivelled, so it all seems rather a waste. I can mulch round them with a mix of chicken poo and grass compost, but there’s not much else I can do to help. I had an idea to try and train them like you see ornamental apple trees. I’ve got as far as cutting off the branches that stuck out forwards and backwards, but have not yet done anything else. What else can I do? The row is far too long to give them stiff wire to train them along. Anyway, I’m hoping that just by having less branches to worry about, the roots in the rubbish might do better. I went out to take a photo of all the blossom this year, but missed it. There was loads, so I’m hopeful for a good crop of apples later on. 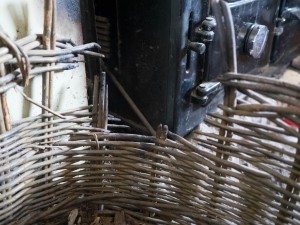 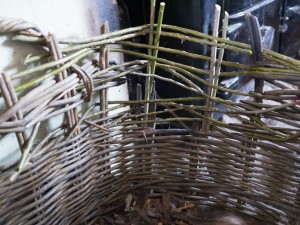 While I had soft bendy prunings, I decided to have a go at fixing my willow log basket that Amanda Rayner from Wyldwood Willow made for me a few years ago. Unfortunately I had a little fire last year and one corner got burnt. I think I did an ok job. Obviously not anywhere as pretty as she did, but I filled the basket with logs, and my weaving was strong enough to do the trick. 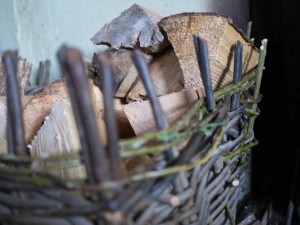 I’d be really interested to know if you grow your own wood to burn? Would you recommend a different tree? How many years do you need to keep cut willow in a shed before using as kindling? Thanks in advance for any help on this!

Making a pineapple and walnut cake – a picture guide for beginners