Pride and Prejudice and zombies 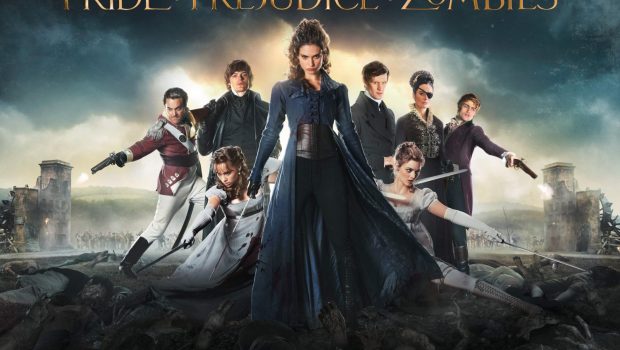 I haven’t read the book by Seth Grahame-Smith, and I’ll be honest I was sceptical, but after seeing the trailer for this film, I couldn’t wait to watch it. I wasn’t disappointed….

The premise of the film is much the same as the original book by Jane Austin, but as you probably guessed by the title, with added complication of zombies. This gives it a totally new twist on, let’s face it, something we’ve seen done several times before.

Favourite scene: the Bennett sisters quoting almost word for word a discussion about men whilst practising their kung fu fighting skills in the cellar.

Second favourite scene: the Bennett sisters getting ready for the Netherfield ball; lacing up corsets and hiding knives under their dresses.

Favourite, then turned disappointing scene: Darcy, in a white shirt diving into a lake (just in case you didn’t know, this is a nod to the very popular 1995 tv series starring Colin Firth), which gave everyone in the room the same delightful reaction. BUT then it cut straight to the next scene before we saw him emerge, wet see-through shirt clinging to fit torso. Considering there was plenty of corset-lifted bosom heaving from the women, I thought this was slightly unfair. In hind-sight this may have been better in our imaginations anyway, because that leads me to…

Iffy casting choices: Sam Riley as Darcy just didn’t do it for me I’m afraid. I don’t like to be personal, but he just isn’t dashing enough to play such an iconic character, and his raspy voice was a little annoying. Also, Sally Phillips is waaaaay too young to be Mrs Bennett. She’s also young enough to be Charles Dance’s daughter, who was playing her husband. The ageing make-up she had on at the beginning of the film seemed to wear off, and it just felt odd.

Clever new bit: It explored class issues by the fact that rich people could afford to train in China or Japan to fight against zombies, so it became an affliction of the lower classes. Interesting.

Overall opinion: I loved it! Can’t wait for the sequel, which absolutely must happen!