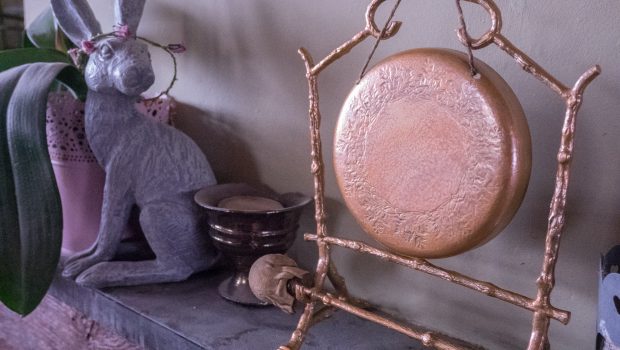 You probably won’t find another blog post with the same title as this one! But that’s literally what this post is about. I have childhood memories of a place called Foxlease in the New Forest where we’d sometimes have a little holiday. It was something to do with the fact that my Mum was a Guide leader. Anyway, it was a big old stately home and they had a huge dinner gong to tell everyone staying there that dinner was ready. Every evening they would take in turns letting the kids bang the gong. It never was my turn…. 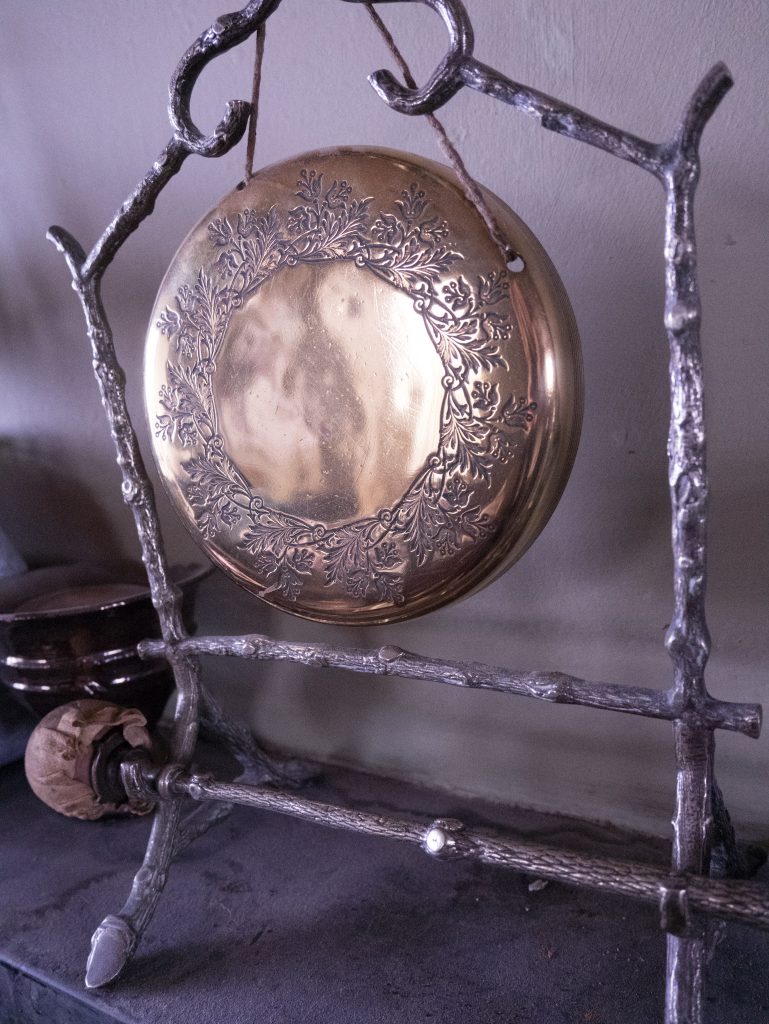 I’ve toyed with the idea of getting a gong for some time, but the large ones are too expensive, and I wasn’t sure the small ones would do the job. It isn’t that we live in a vast house, it’s just that we have thick stone walls and kids with You Tube or music on all the time. I still have to walk about the house banging it, so that Chris hears it from the top of the stairs to the cellar; Jude hears it from under her room and Rain hears it from under her room; but it’s 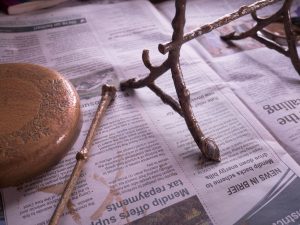 more fun and less stress on the throat than shouting.

There are several small gongs on ebay, and I chose this one because I like the twig effect of the stand, and it really was a bargain price – probably because it’s a little wonky. I think it’s from the 1920s and I’m glad I’ve got one that has the original matching striker.

I was perfectly happy with brass, but I’m all on the copper trend, so I thought I’d see if I could get a good effect with hammerite hammered copper paint. As far as fashionable copper kitchen accessories go, unfortunately there aren’t many gongs about! I’ll be honest, I was a little disappointed with the result. There was definitely more of a copper tone to the metal after painting it, but it wasn’t as bright as I hoped it would be. The gong took the paint better than I expected and I liked the hammered texture finish, but the stand still looked very brassy. It didn’t look worse than before and I liked the subtle copper sheen which was more noticeable with the sun shining on it, so overall I’m glad I had a go. I was going to leave it at that, but then I remembered I had some copper metal paint amongst my jewellery making things. 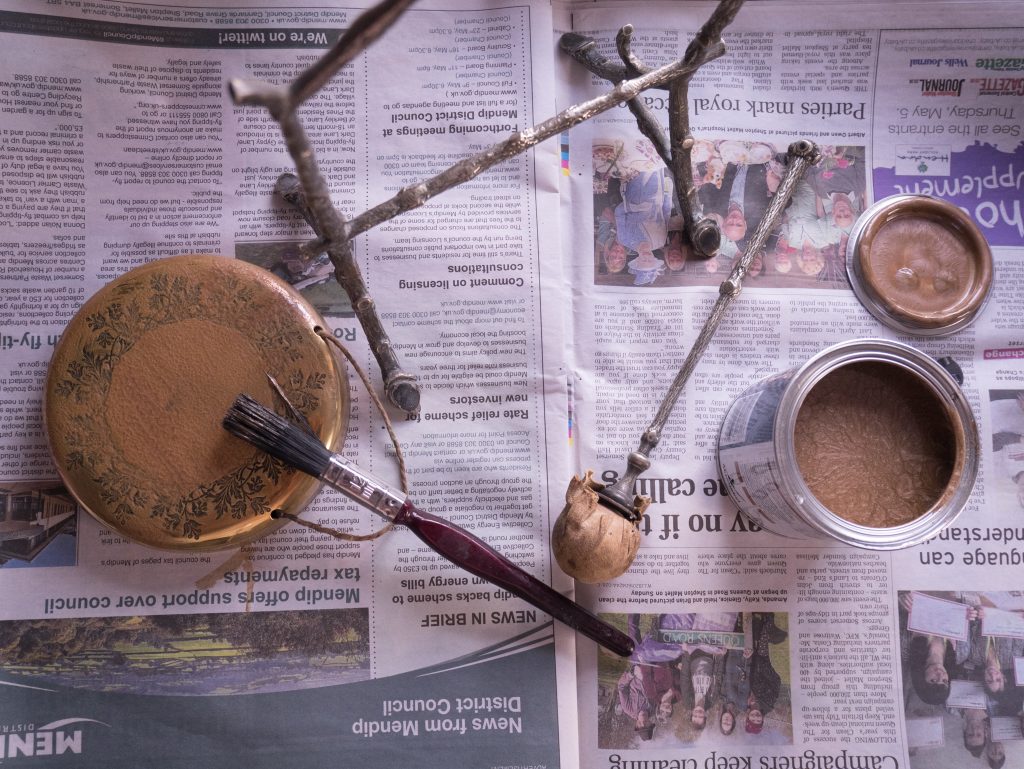 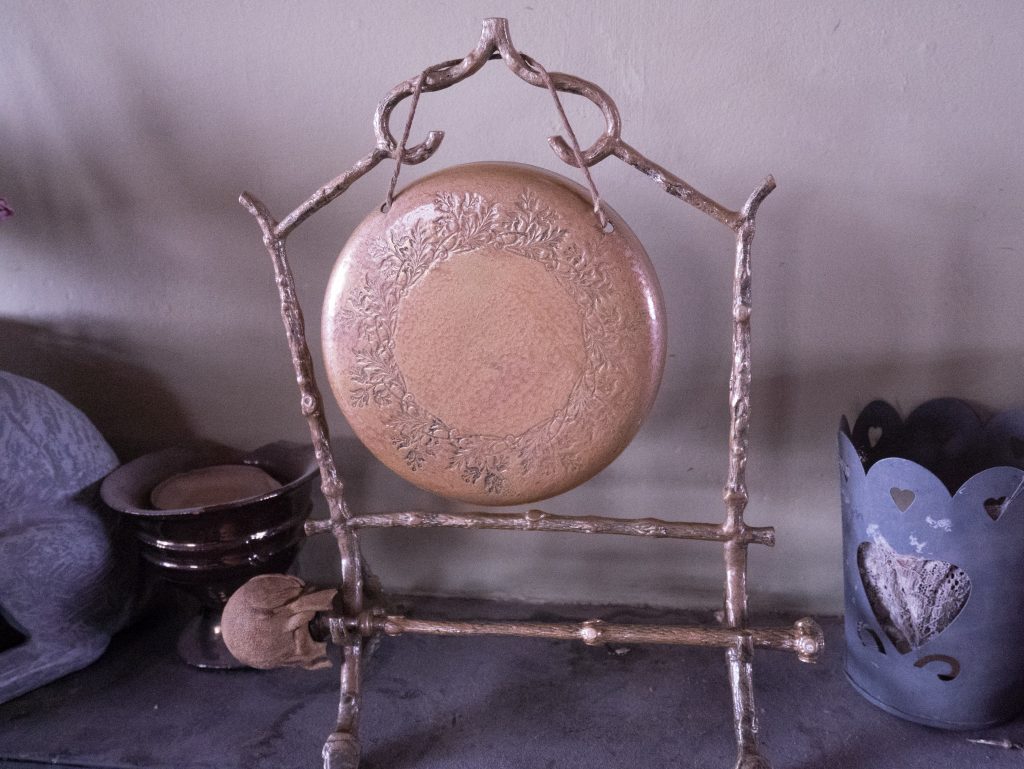 I was nervous about putting on a second coat as I was starting to lose all the engraving that gives is a textured twig effect; and also, I’d never used this paint before, 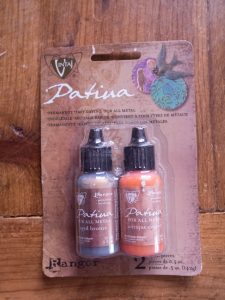 so I wasn’t sure I was going to get anything better than I had already. It’s called Antique copper patina by Vintaj from Ranger, and is a permanent fast drying ink for metal. It turned out to be perfect and gave the gong and stand the more pinky bright shade of copper that I was after, but still shows the texture of the twig metal underneath.

So if you like the copper trend, then this is perhaps an option to consider as small brass items are dirt cheap, so you could do this with any little brass ornament and end up with something no-one else will have. 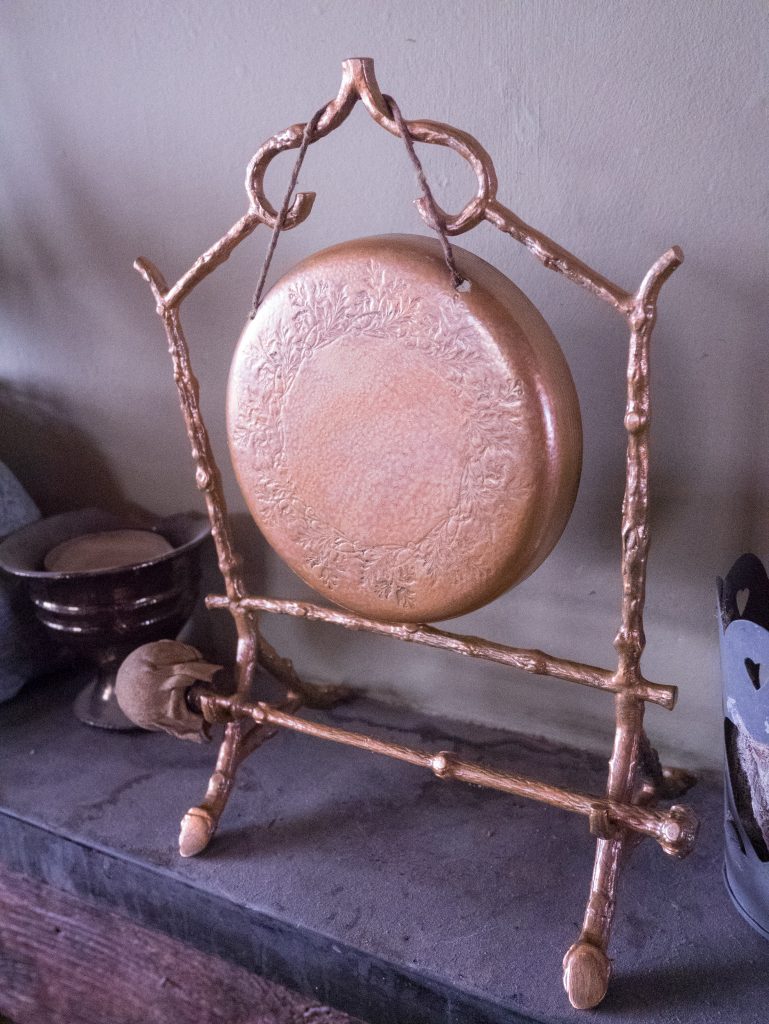 Please let me know if you’ve tried painting anything copper and how good the outcome was.

Should I do NaNoWriMo?