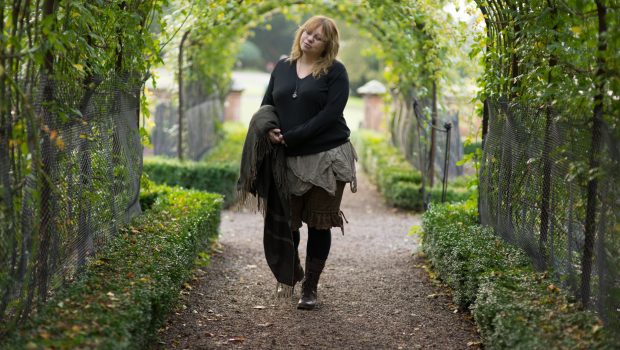 We were invited to visit the home of the Gibbs family at Tyntesfield Manor in the year 1891. (It was a National Trust event.) Of course, we took the opportunity to go for a theme with our outfits that day! I didn’t have much in the way of late Victorian clothing, so I decided to go for a bit of a steampunk look instead. It was an early start to ensure we could get tickets into the house, so in the hour we had to wait our turn, it was the perfect opportunity to wonder the grounds and take photos…. 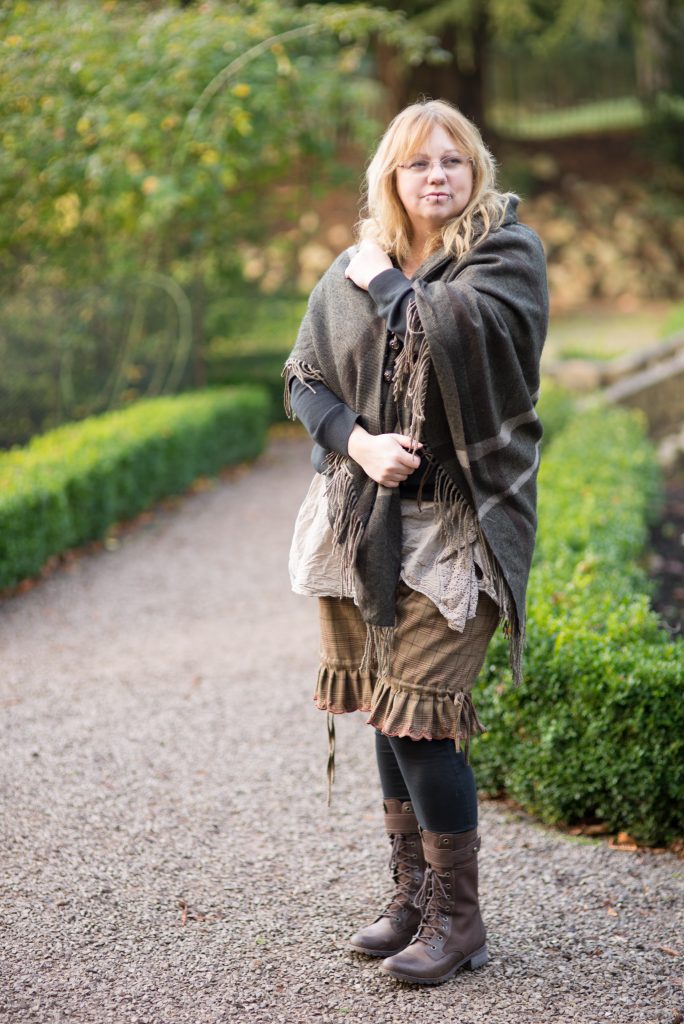 A nod to neo-Victorian Steampunk 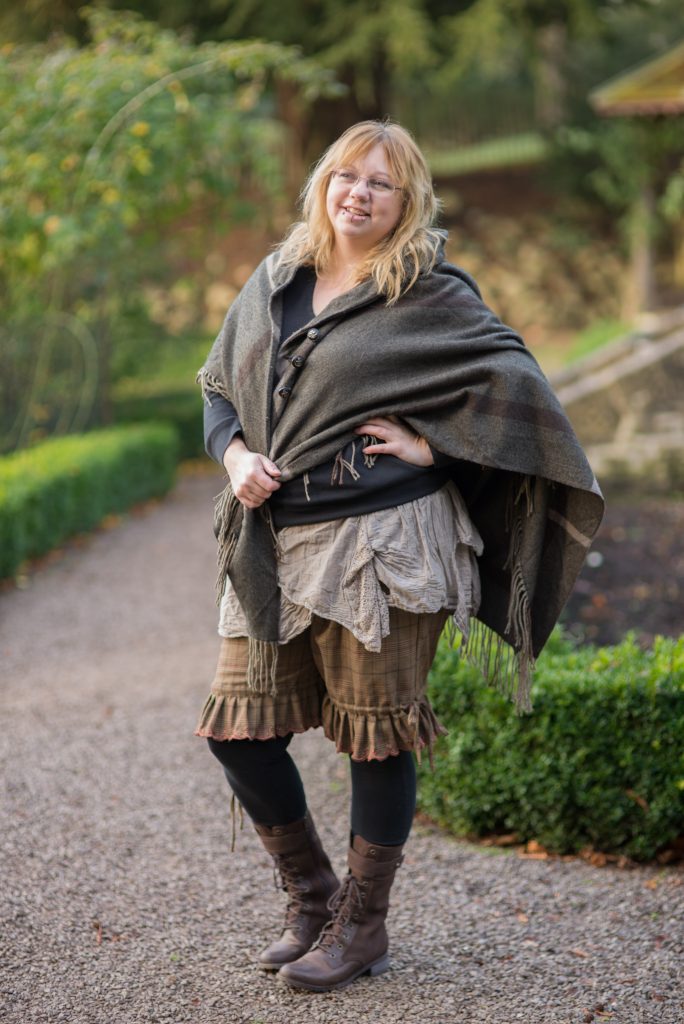 I know you’ve seen this shawl a few times now, and I’m sorry to keep showing you the same thing, but it just went so well with the outfit, it would’ve been stilly to choose something else! It’s from Joe Browns a few years ago. 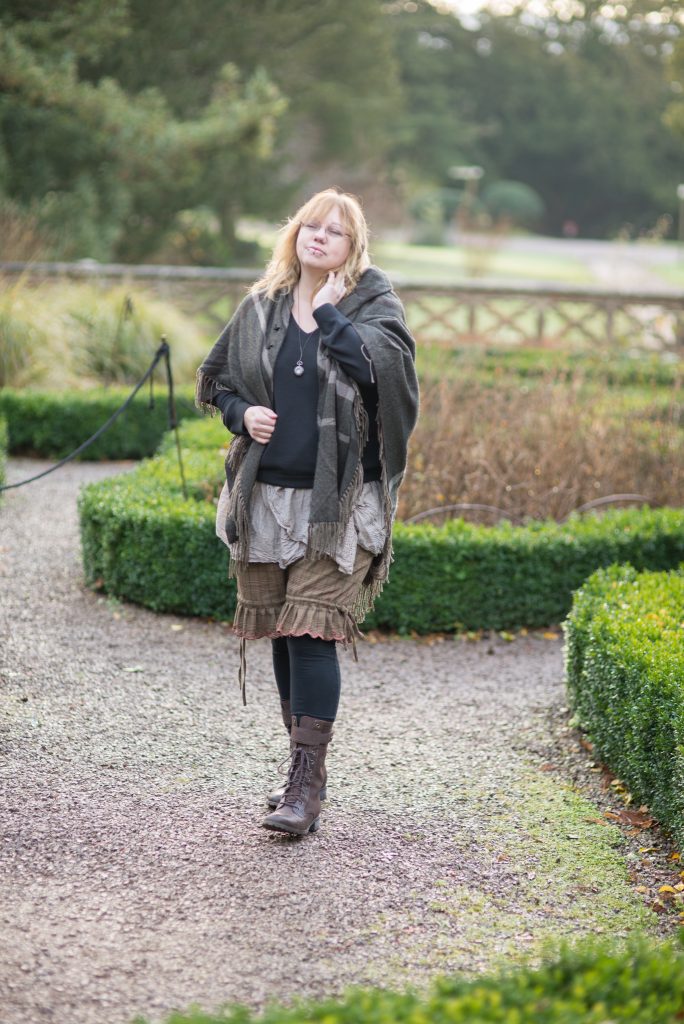 It was a very cold day, so I wore my thick cashmere leggings underneath the bloomer shorts to keep warm! 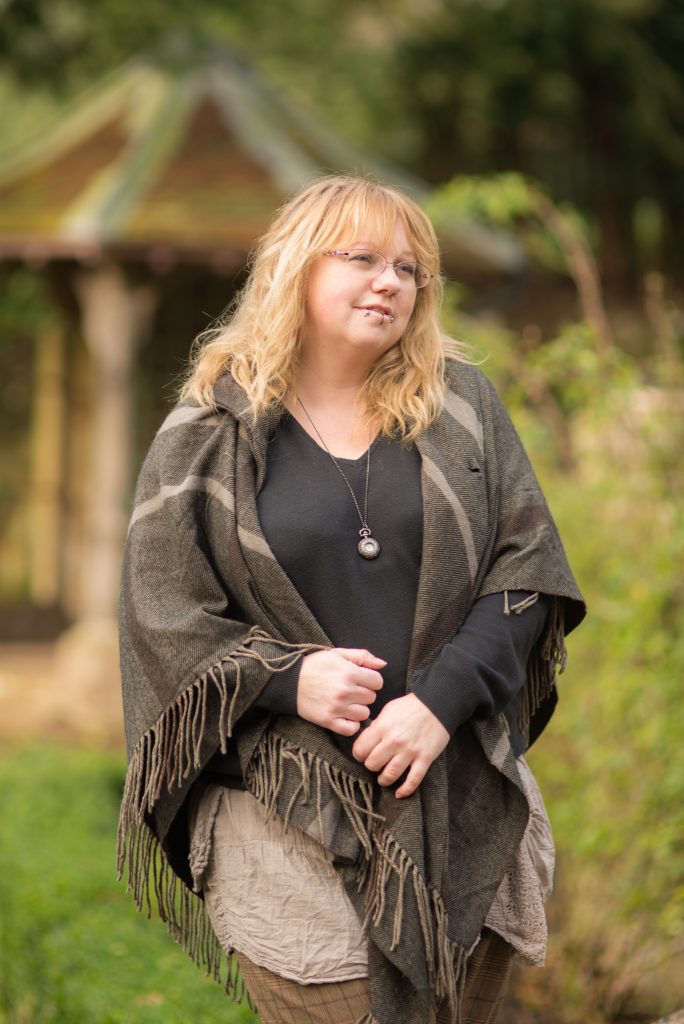 I bought the pale beige cotton tunic dress from a stall at Glastonbury Festival. It’s very pretty with its different textures and lace panels, but sadly has quite a big rip in it, that I keep meaning to mend. It’s great for adding a layer over trousers and under jumpers in the winter. 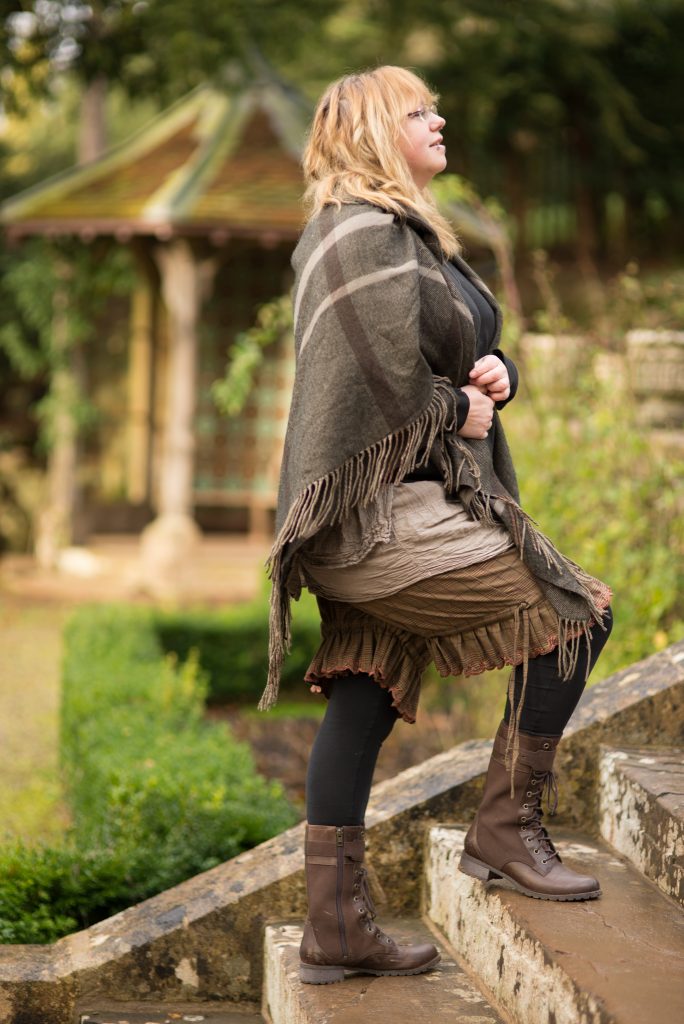 The tweed bloomers were bought at Glastonbury Festival from Rosa Bloom. I love them so much and I have a longer pair too! They make great quirky shorts and give your look a bit of steampunk style. You can see me styling them for summer here. 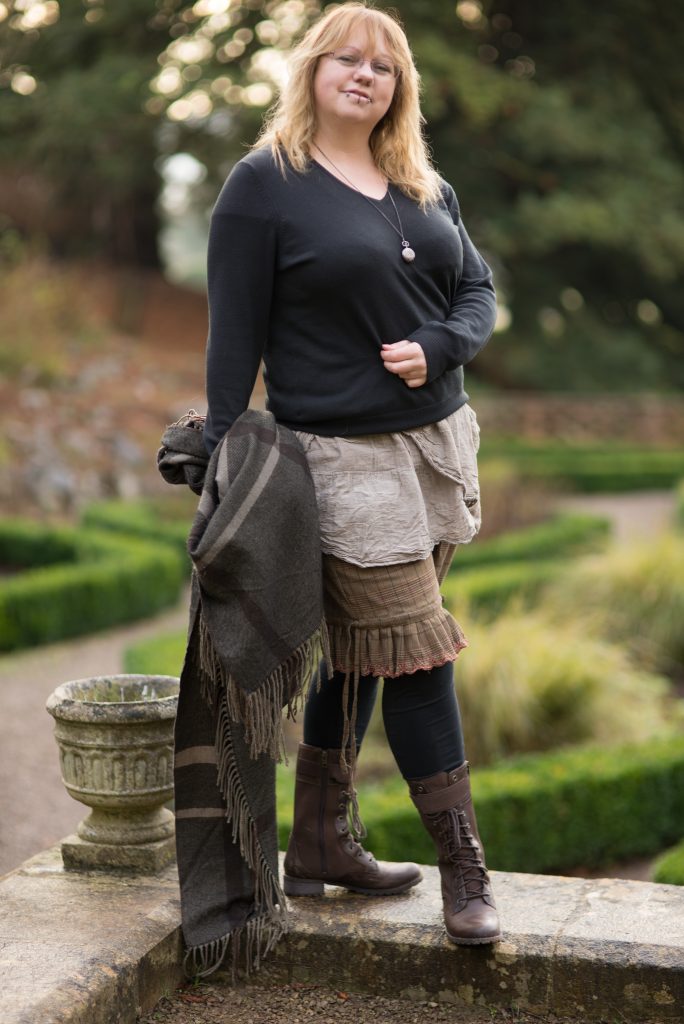 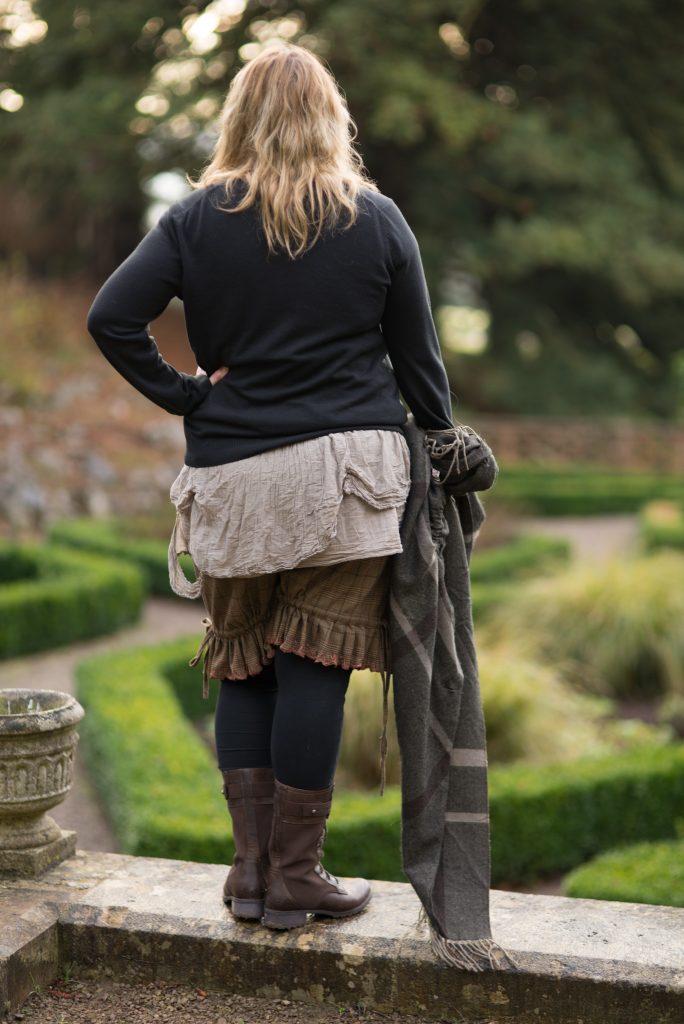 The black jumper is a Marks and Spencer classic. It goes with everything and I wear it all the time. I had to mend a hole in the armpit that morning, but the jumper hasn’t gone bobbly and on the whole the quality is proving up to the task. 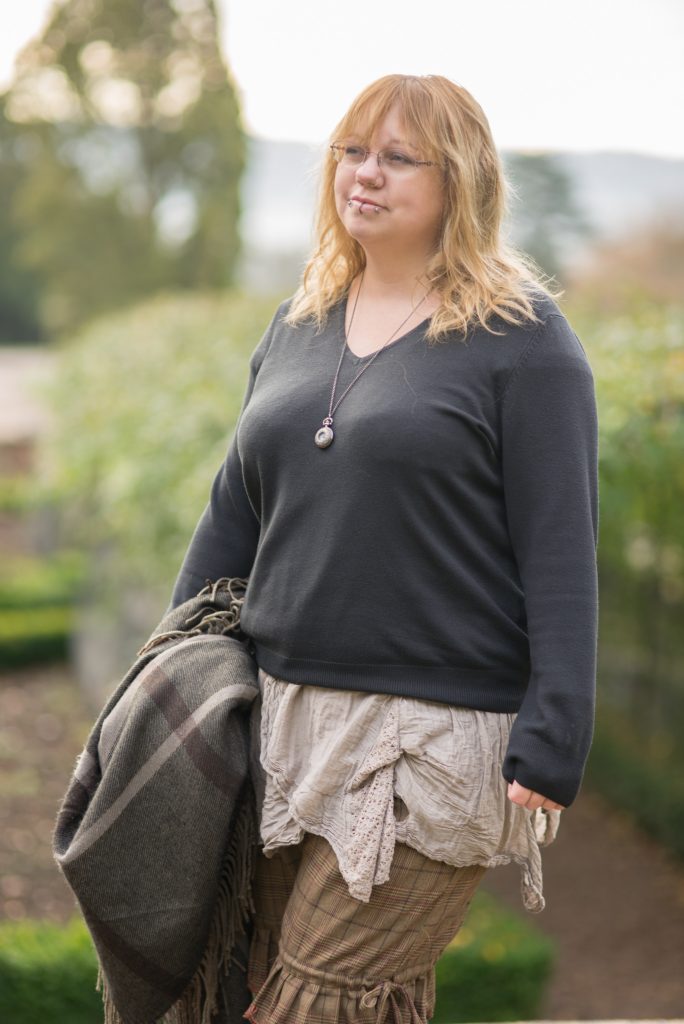 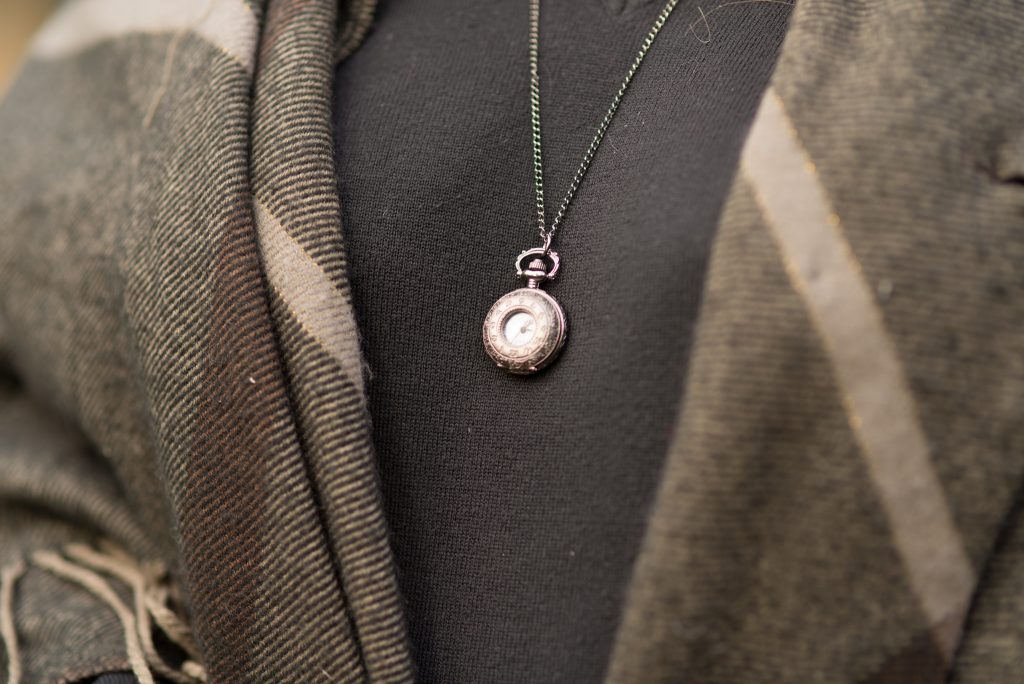 This steampunk necklace was another Glastonbury Festival stall purchase. The wind-up pocket-watch style works so well with this outfit and really finishes off the steampunk fashion look. 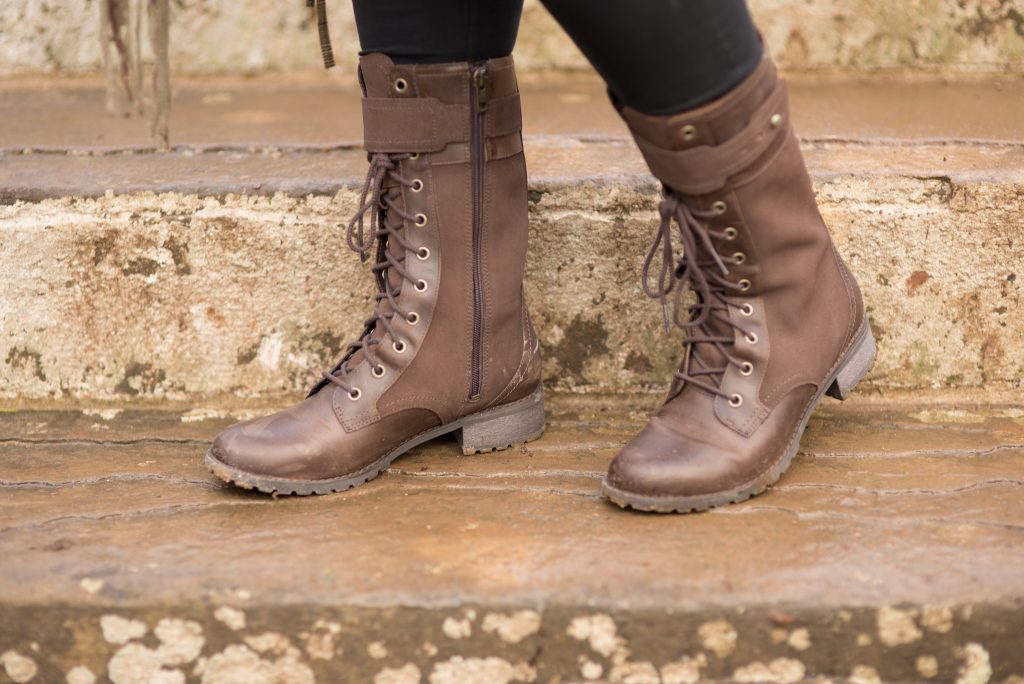 These brown leather boots are from Timberland and were a Christmas present from Chris. This was the first time I wore them actually and I know they’re going to be a favourite. They were really comfortable, right up until the last hour of wearing them (we looked around the shops in Bristol after this), when they started rubbing my little toes; so like with all real leather shoes and boots, they are going to need a little wearing in, but that’s fine. Again, they worked perfectly with this steampunk look, but I can’t wait to wear them with summer dresses when the weather warms up. 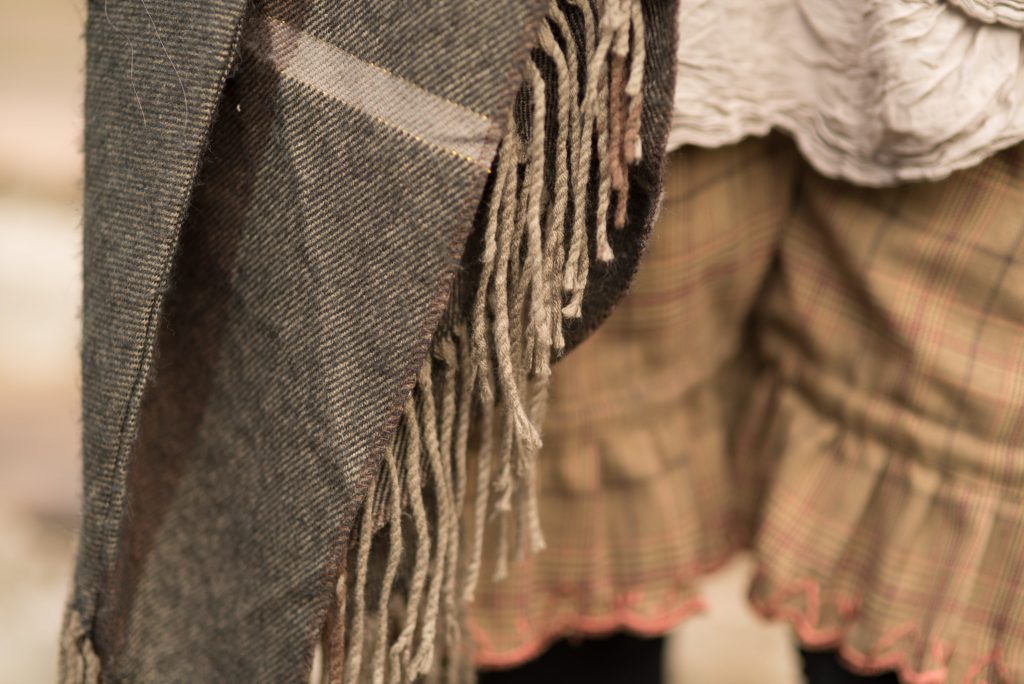 (Could be the same one, but not certain.)

Linking with #iwillwearwhatilike at Not Dressed As Lamb and #visibleMonday at Not Dead Yet Style.

Layering style was really the key for this look and perfect when you’re going in and out of doors and aren’t sure what the temperature is going to be. There have been nods to steampunk fashion the last couple of winters, but it has never fully become mainstream. That’s probably for the best! (We wouldn’t want it become too cool!) Do you like a bit of neo-Victorian style in your wardrobe? 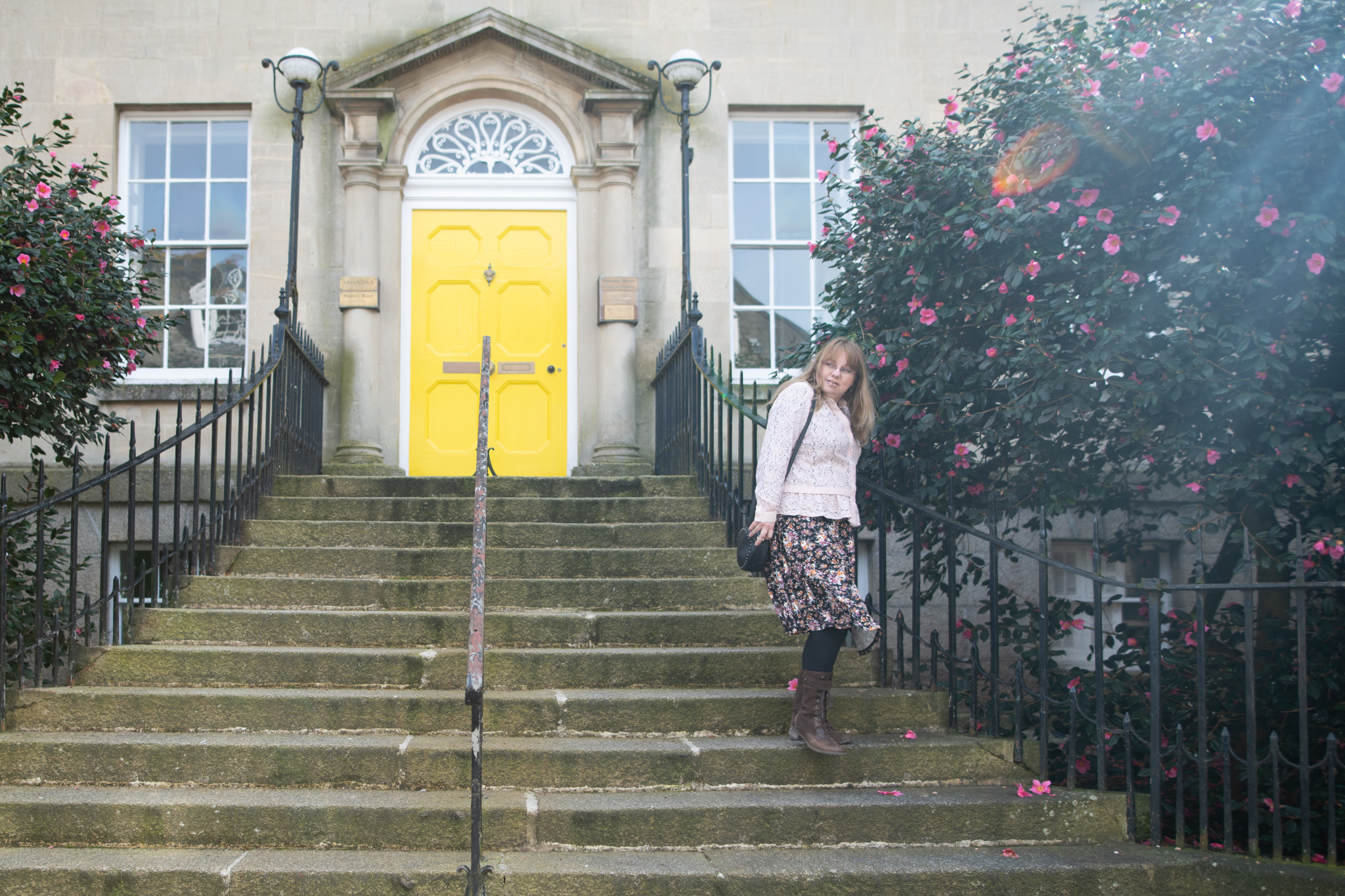 A guide to buying jersey dresses. Styling a Joe Browns floral dress
This jersey dress from Joe Browns made its way into my clothing collection recently, so I thought (for a change) I would share it with you before it goes out of stock! If there’s one item of clothing I’ve been reaching for lately, it’s been a dress made out of lovely comfy stretchy material! Jersey, by the way is what t-shirts are made of; a woven fabric with some stretch, sometimes with added elastane or lycra for extra stretch. Through winter I’ve been wearing them with a snuggly jumper over the top and thick leggings underneath and it meets that elusive requirement of being comfortable to wear, but still looks good enough to leave the house in. However, there are good and bad points that need considering when shopping for a jersey dress….. 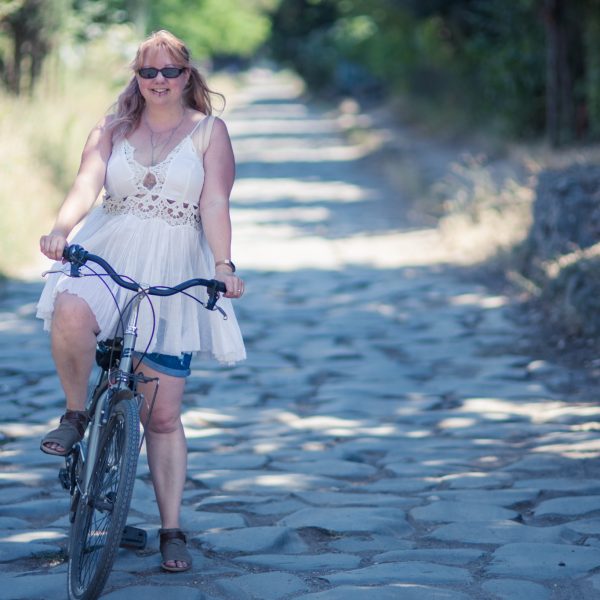 Styling boho chic for sightseeing
I love bohemian style fashion at any time of year, but there’s something about the romance of summer sightseeing that makes it even more perfect. And if you were to think of a boho brand, then Free People would probably be it… 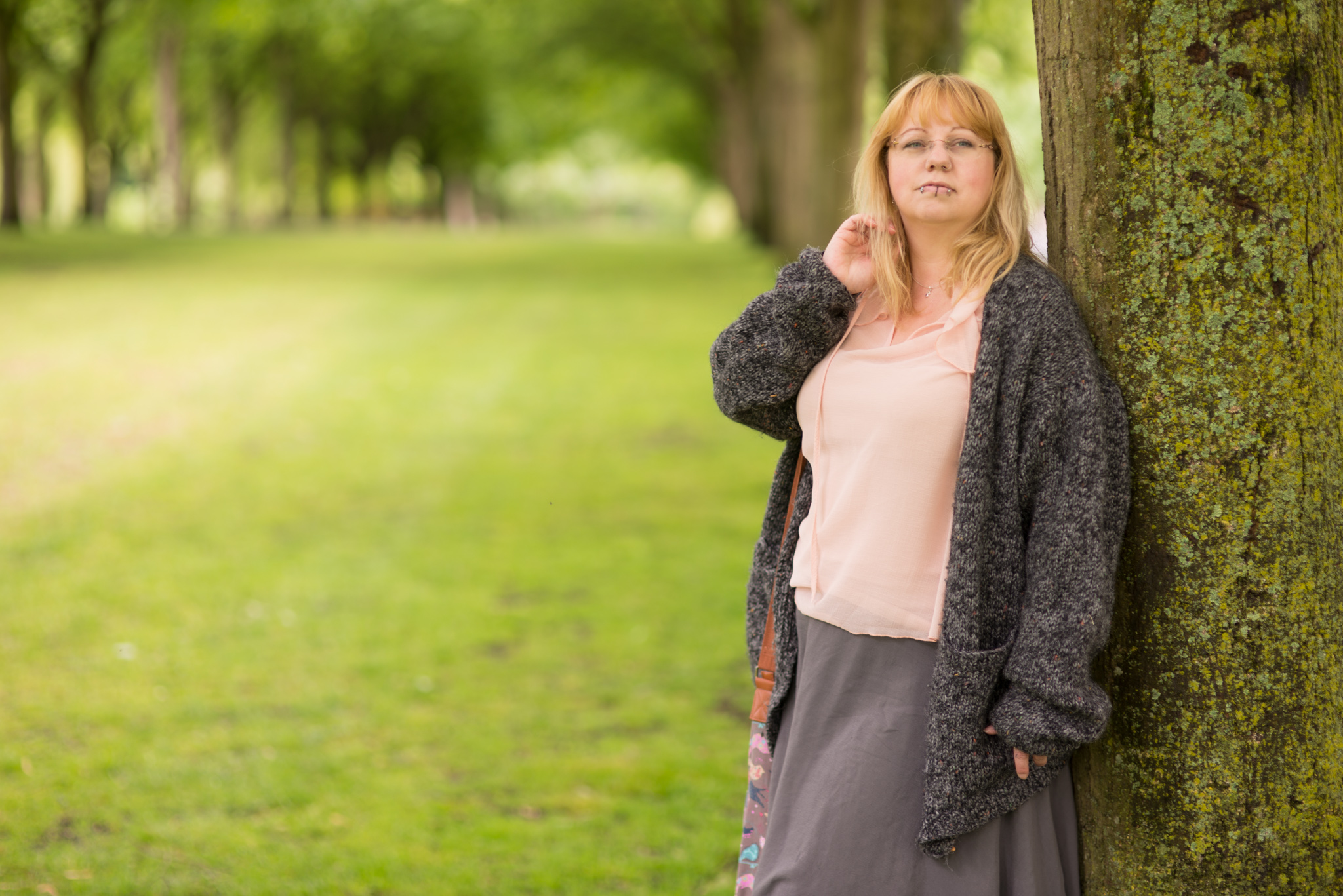 How to rock the granny chic trend! Styling a hand-knitted cardigan
I don’t know whether you’ve noticed it, but I’ve spotted lots of people lately wearing jumpers and cardigans that look like their granny knitted it. They probably didn’t, because these people are probably young enough that their grannies are still in full time work and far too busy to be sitting by the fire and knitting. However, I was lucky enough to have a Nan who knitted and was proud to wear my royal blue school cardigans with massive sleeves that no-one else had. (At least I was until I was ten.) Maybe that’s what sparked my love of wearing things just a little bit different to everyone else. (Damn – I wish I’d thought of that argument when I was a teenager “Well if you didn’t want me to wear 1960’s mini nightdresses with Doc Martins, maybe you should’ve just bought me a Woodlands school cardigan with the logo on it like everyone else had!” sort of thing)…. 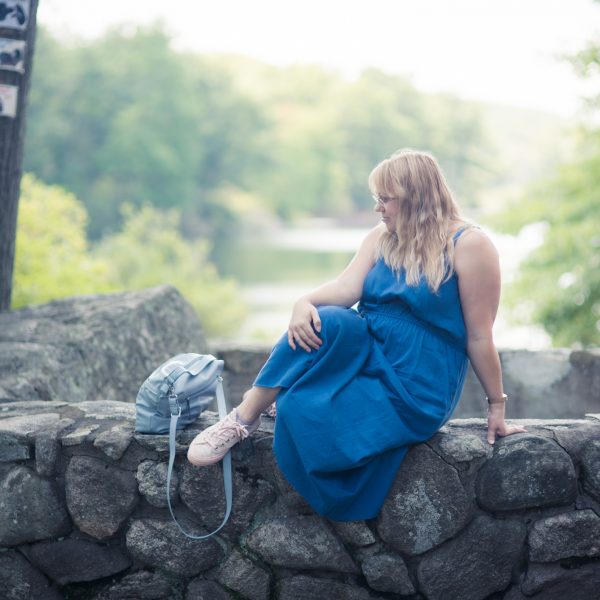 Should I stop vlogging?

5 Positive ways to make your resolutions and goals actually work this time!

Love those bloomers and the whole steampunk vibe. Thanks for linking up with Visible Monday, xo

Thank you Patti. I like a bit of steampunk every now and then!

Looks super cozy! Hope you have a great week!

Thank you Rachel; you too! Despite the cold weather, I did stay warm 🙂