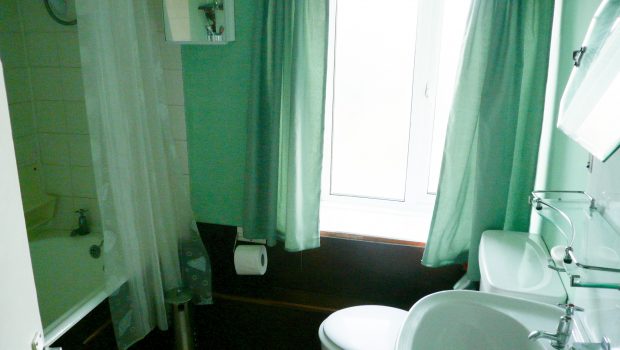 We moved to this house eleven years ago, so for the first couple of years I shared the renovations (that we did mainly ourselves) on this blog back then. Then our mortgage deal ended and our kids needed car insurance, and we decided any spare money we had we’d spend on holidays together. So work on the house has been minimal for the last few years. However, it really is time we got the bathrooms done….

I feel a bit of a fraud calling this a ‘Renovation blog post’ because this time, we’re not doing any of it ourselves. I think the thought of dealing with different tradespeople was putting us off – we need a plasterer, a plumber, an electrician, a tiler, and I wasn’t entirely confident going about it. So we went to Wickes. It’s the only DIY chain near enough to us that also supplies the fitters as well as the actual bathroom bits and pieces.

That was a month ago.  Darren came out to the house and measured up. We went back into the store, chose our bathroom from their showroom range; picked the tiles and signed on the dotted line. A week or so later, J, who is going to be in charge of the build, came out and double checked measurements and details. It was originally going to start three weeks after that, but it could be brought forward a week, so that’s great. Last Monday the electrician came over to see what’s what and to give us a quote. This is where I’m annoyed, because I haven’t had much luck dealing with electricians in the past, and I was hoping not to have to again! However it turns out the electrician is separate and has a separate bill; even though they arrange who it is. He said he’d e-mail the quote that day. One week later, after being chased up by J, we received it this morning: £699.60. About double what I was expecting. So now I’m just suspicious that he deliberately left it a week, because now we don’t have time to get quote from others.

This last week has been spent setting the alarm for 7am for four separate deliveries; the tiles, the shower tray; the shower screen and the rest of the bathroom. It’s also been spent on other preparations. I needed to clear out a wardrobe so that we could move it so the electrician can have access to the roof. The corridor upstairs had to be cleared out of junk; the log delivery outside had to be stacked up a bit more to one side to allow for access, and we’ve cleared up the area behind the garage to park a car out of the way to allow more room on the drive. And emptying out our tiny bathroom – which I thought would take about twenty minutes at most, ended up taking two hours! How? I don’t know!

Anyway, here are the ‘Before’ photos. The first two and the one above are from when we looked around the house because I forgot to take any before the builders came. (Hence the mugs of tea on the sink!) 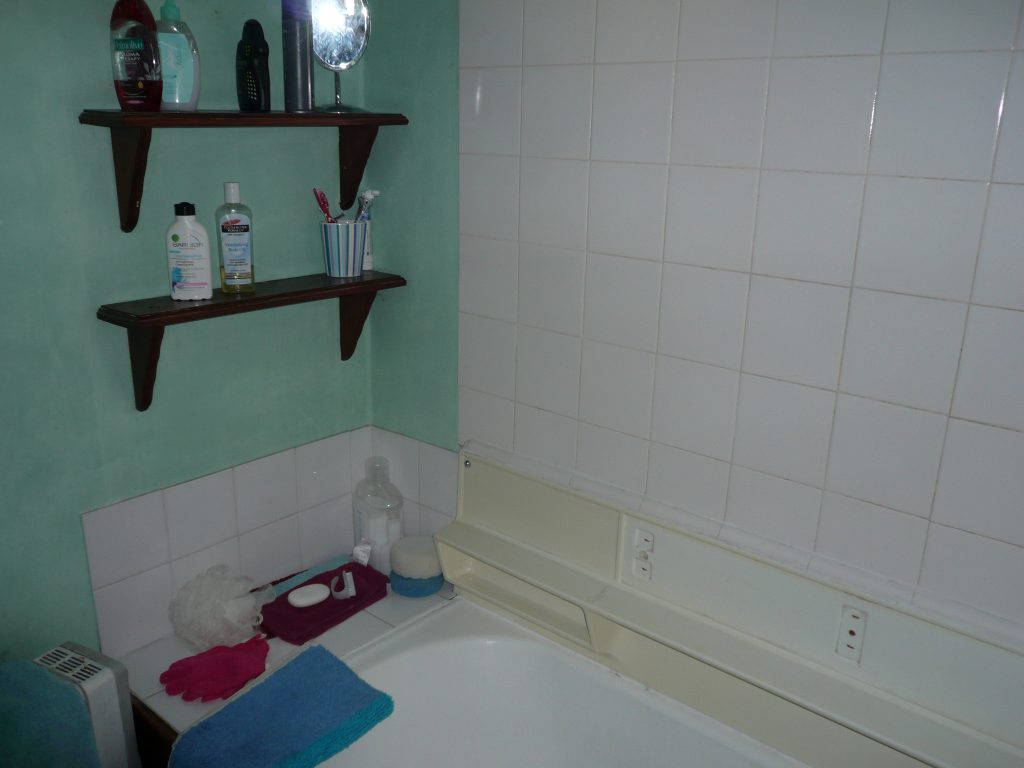 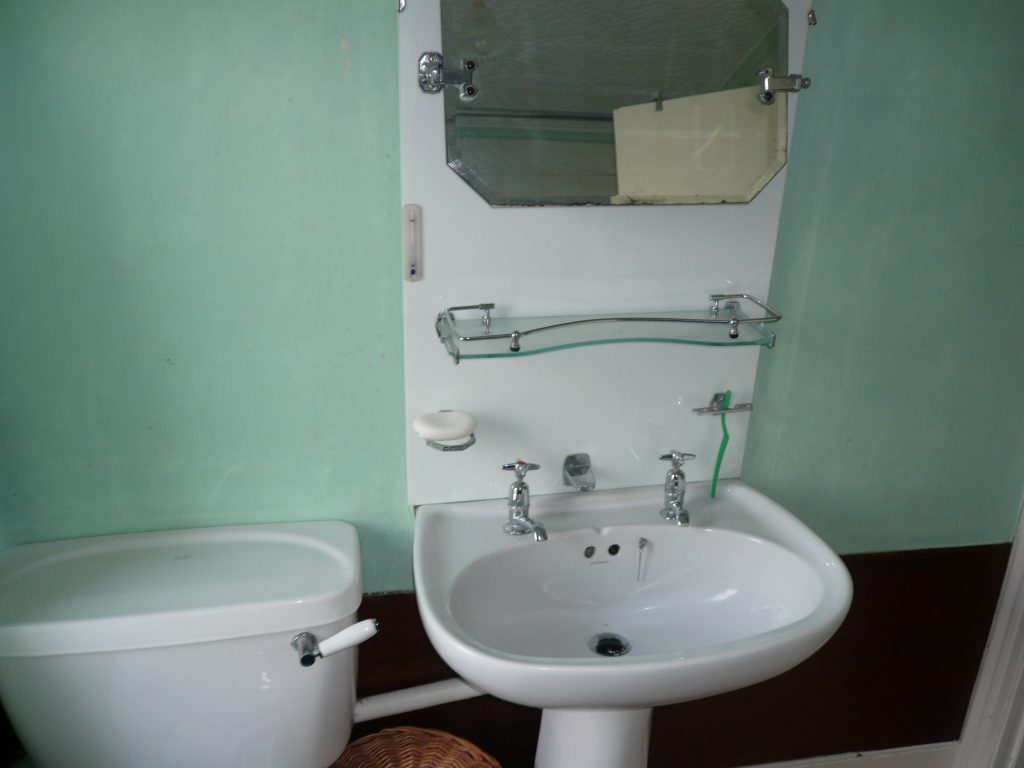 I rescued the mirror unit as that’s worth something. It’s original Art Deco and we’ve spotted them in the reclamation yard for £120 each, so I might see if they want to buy it. 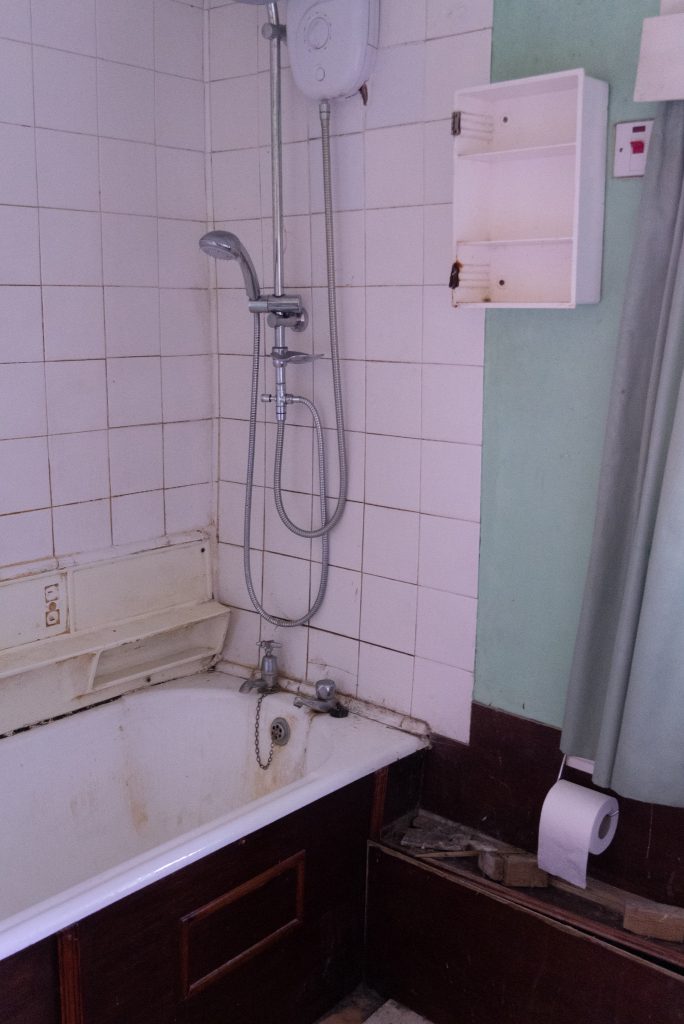 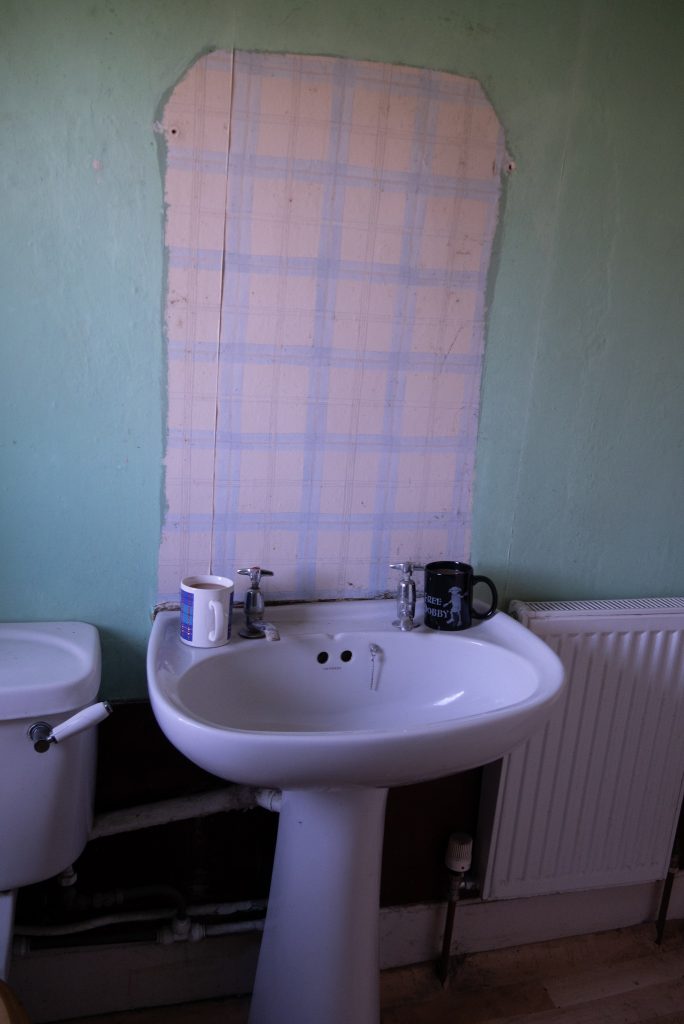 So J and R arrived this morning; thankfully not too early. I made them a tea and a coffee, but after that they’ll have to help themselves! They’ve got to work and seem to be clearing out our old tiles fairly quickly. It still feels strange that they’re doing that, when that’s a job I could’ve done. I’m definitely feeling that when we do the kids’ bathroom, I’m going to do more of the work myself and just get people in when I need them. That way, we might manage a holiday as well as a new bathroom in the same year! The whole thing is ending up a lot more expensive than I expected considering it’s such a small room. I’ll give you the cost of everything at the end.

One thing I didn’t prepare for: the water being off. I knew it would have to happen, but I didn’t think it would go off on the first day! All I have in front of me is half a glass of water. And I drink water a lot! And this is where my social anxiety and shyness gets on my nerves, because I could after all just ask them when the water is going back on; but I know I won’t! Instead I’ll probably drive to Tescos to buy some even though I hate buying water. And I just hate having people in the house – I feel so uncomfortable and on edge right now. I’m hoping that I’ll get used to it quickly and relax a bit more.

(Continuing at the end of the day) The first day of work is over and I can’t believe how much J and R managed to clear! It turned out it was a cast iron bath (explains why it was so difficult to clean!) and they had to saw it in half to be able to carry it out! I’m now less worried about the weight of the stone shower tray that me and the delivery guy carried in small stints from his van to the living room! All has gone fairly smoothly so far, except for the fact that I hadn’t expected them to pull apart the old walls in the bathroom. And this is where I have small doubts about getting people in to do the work. They can’t be done with the hassle of dealing with old walls, so they rip them up, and put up new ones. Now I’m not a builder nor an expert, but I have to wonder that if I was tiling those walls myself, that with just a bit of extra effort I could have kept them. The side wall isn’t even being tiled, but where the old tiles were pulled off and it left damage, instead of making good the damage, they took down the whole wall! Now Chris and I have taken down a couple of these old lath and plaster walls before, and we know how much dust that creates. I wasn’t prepared for it! It’s not only all along the corridor where the bathroom is; it’s gone over the fabric that was being stored in the next room along; over my clothes in the dressing room as the door was ajar; all down the stairs; and everything in the living room is also covered in a fine layer of dust. And the cats sit in it, so whenever you stroke the cats, your hands get dusty then too!

Here is the bathroom at the end of renovation day one: 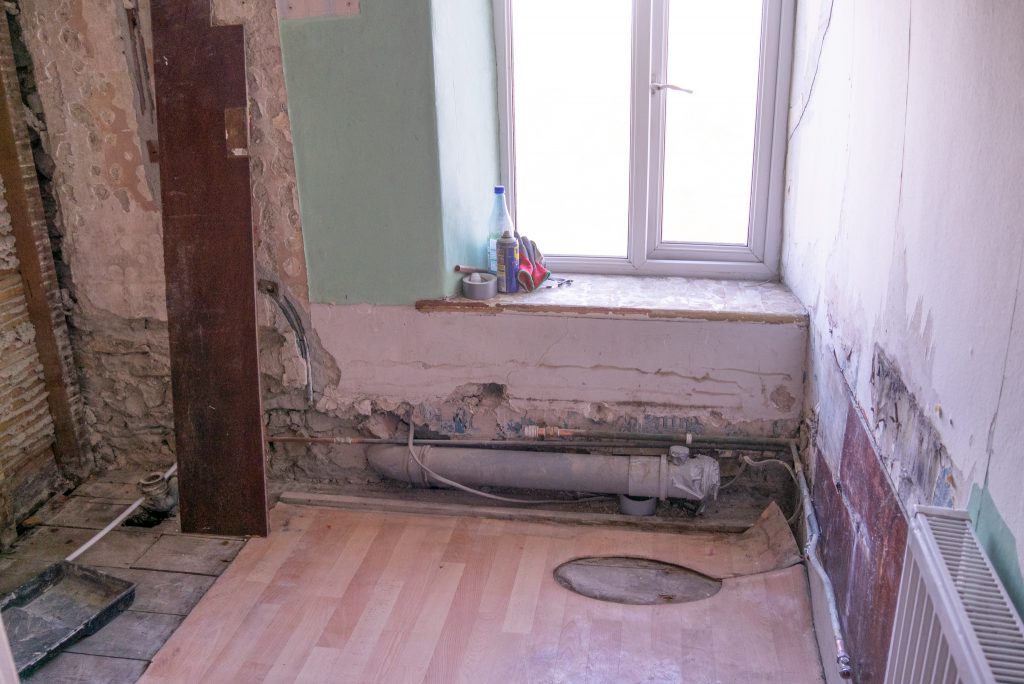 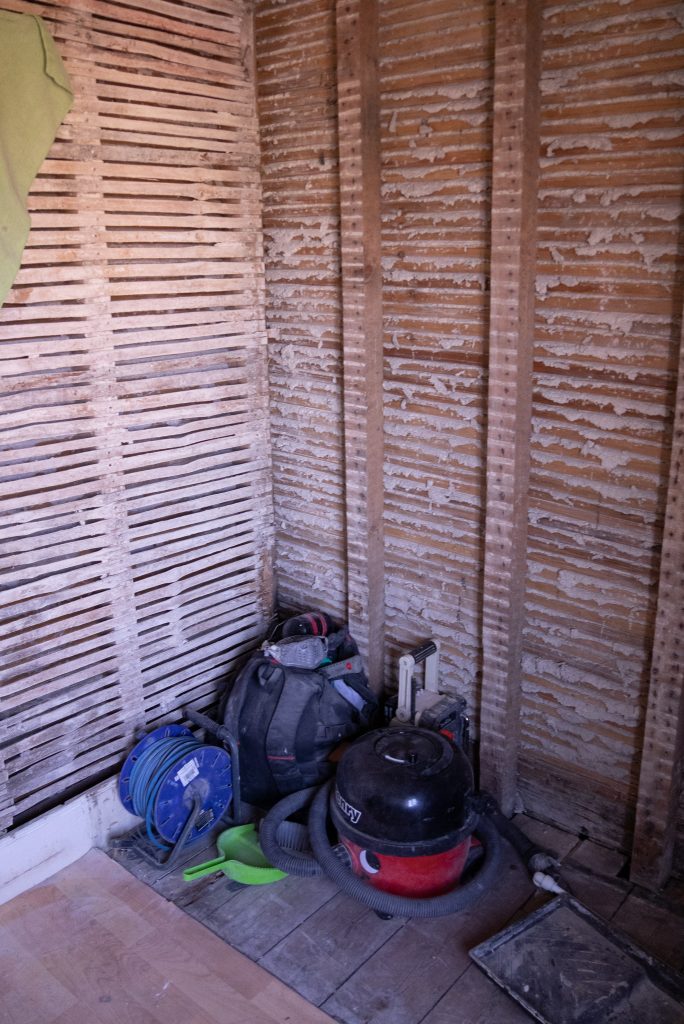 I love the history of our house being discovered when work is done. The wallpapers in this room are absolutely fascinating and I’ve just done some research. The blue and white Chinese scene was the sort of wallpaper popular in the first half of the eighteenth century. This matches our estimated date for that part of the house is (it’s a Georgian extension on a house from 1640.) so I actually think this room was originally decorated in that wallpaper. I also think, from looking at the architecture – the mouldings around the doors to the two bedrooms next to it – that the room was always intended as a bathroom. It’s far too small to be a bedroom. 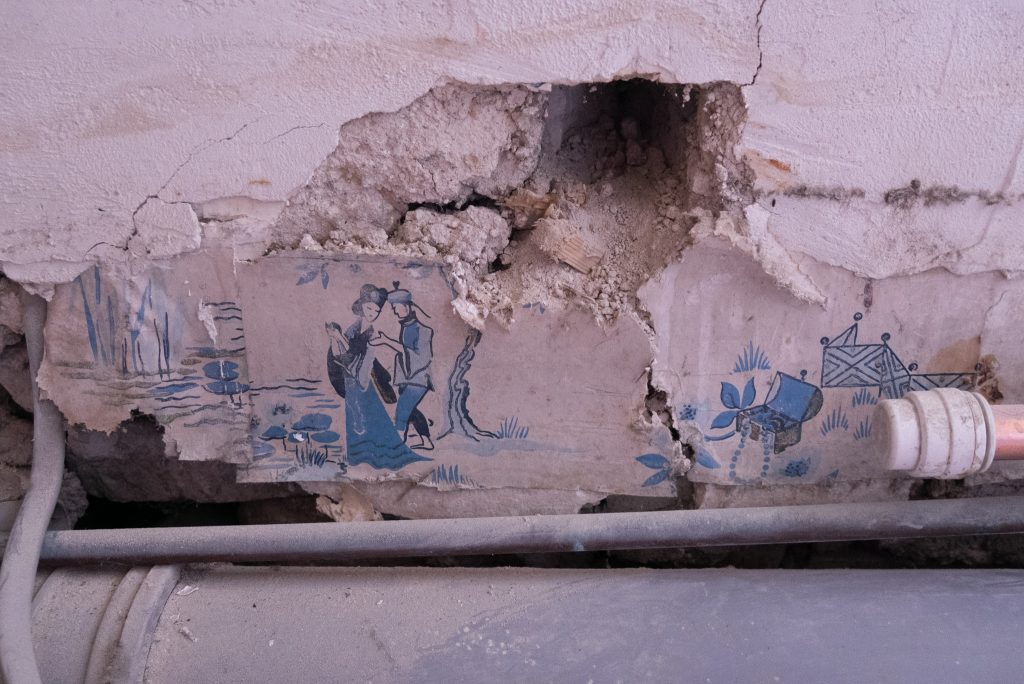 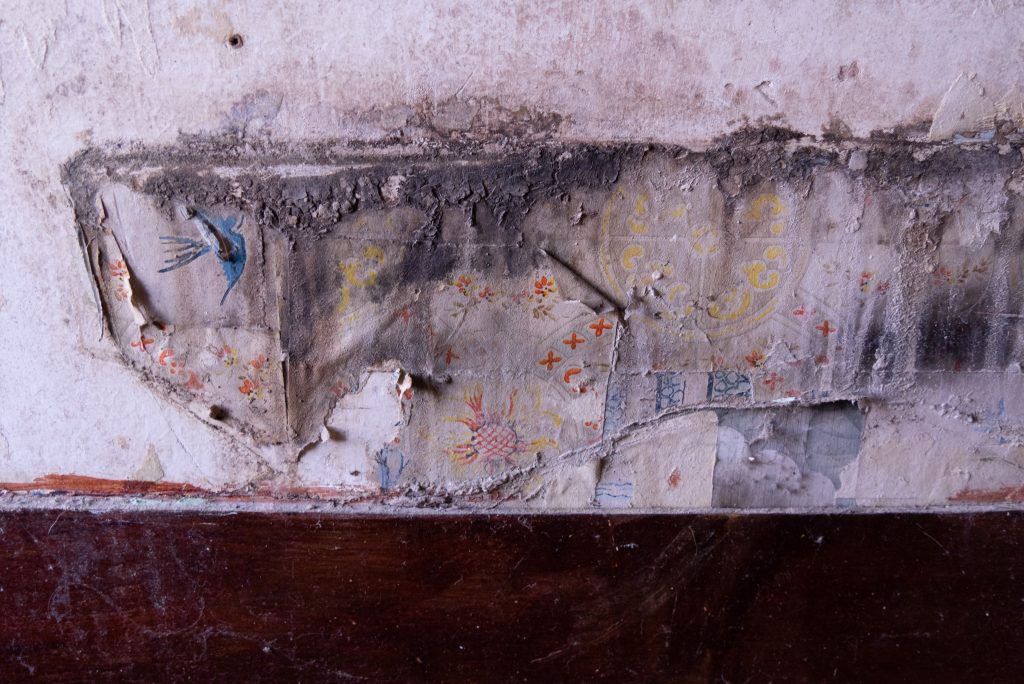 The orange and yellow pattern that was wallpapered over the top is more difficult to date, however I suspect it was from the 1930s. The glass lampshade and the mirror splash-back are original Art Deco. We have other features around the house from that time (two fireplaces, another mirror, another glass lampshade) that had been left when we moved here, and suggests the owners then gave the house a ‘modern’ update. The owners after that were not much into interior design!

Well I had intended on writing one blog post about the whole thing, but as I’ve waffled on quite a bit already, I’ll post about it in instalments if you don’t mind. It’s meant to be a two-week job, so I might be back half way through, or not until the end, depending on how much there is to tell you about!

If you’d like to see other vintage and antique wallpaper we have found under layers around the house, I put them altogether in a blog post a few years ago.

Fun times.. I hate the disruption as well, but you’ll end up with a fab new part of your house 🙂

Hello Stephen! Yes, it’ll all be worth it! Now we’ve got started again, I hope we keep going with improving the house now. 🙂

Hello Helen
Have you updated your bathroom renovation stage two?…

Hi Barbara,
No, sorry I haven’t because it still isn’t finished! I’ll do a quick interim update next week, and then show you the completed bathroom soon I hope!! (The delay isn’t the fault of Wickes – it’s because I can’t find the perfect vintage mirrors!
Helen x

My son owns a kitchen/bathroom business.
He oversees everything, arranges the tradespeople, makes sure everything is delivered at the same time, and that the work is carried out as planned in the given time frame.
He keeps in touch with customers every step of the way.
A quote is a quote and would/should never be changed. Everything is covered and protected before any work is started.
Even the rubbish is taken away.
His motto: ‘never deal with Wickes’

Your son’s company sounds like a great one deal with! Well I didn’t really have any problems with Wickes, so it turned out fine in the end.