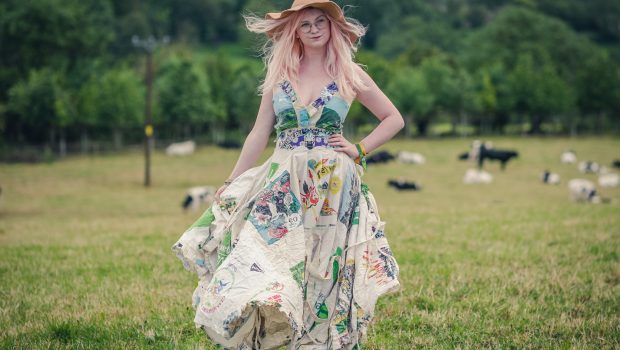 Wishing Glastonbury Festival isn’t over, on the Monday afternoon when most people have gone home, the kids and I usually take a walk through the festival site. It’s sad to say that some people STILL aren’t taking any notice of the ‘Love the farm; leave no trace’ mantra, and during the years when we were given free tote bags on arrival, unfortunately many were left behind. Rather than let them go into landfill, from 2015 to 2017 I decided to pick up as many as I could carry to turn them into a festival dress…

This wasn’t the first time I had the idea. My Glastonbury Festival bag dress version 1, can be seen in this post from 2014 and was made with just my own old bags. It’s a bit different from my usual silks and satin sustainable fashion I make for Threads of a Fairytale, but it’s really fun to play around with, and this time I decided to go big and make a dress suitable if someone was looking for a festival wedding dress. 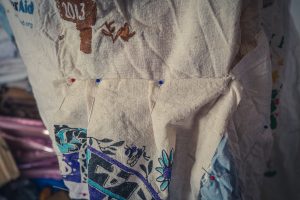 The bags are mainly made from cotton, but some are jute or hemp and once washed, they are surprisingly soft and comfortable against your skin. The patterns, colours and logos changed each year, so there’s a nice variety of materials and means I could include a little pop of purple from the 2017 bags!

I began by making the bodice section of the dress and pinned pieces of fabric onto my mannequin to hold it in place. I knew the shoulder straps would also form corset-style lacing down the back, so until that part had been made it was a little tricky to stop the whole thing falling down all the time! However, once the top half was stitched together, I could then begin building up the skirt. 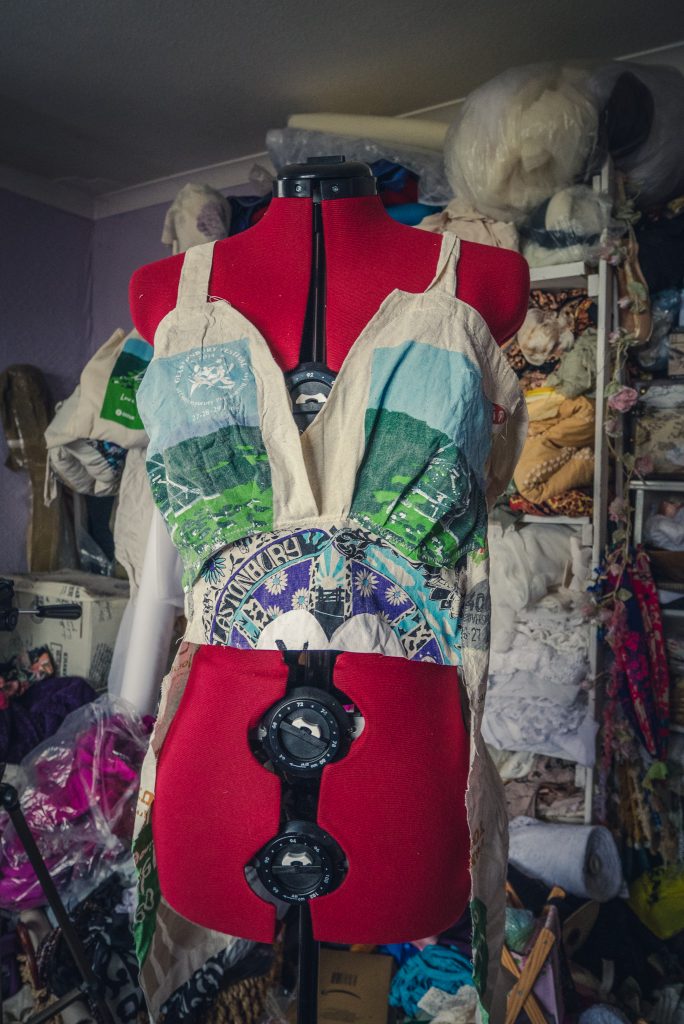 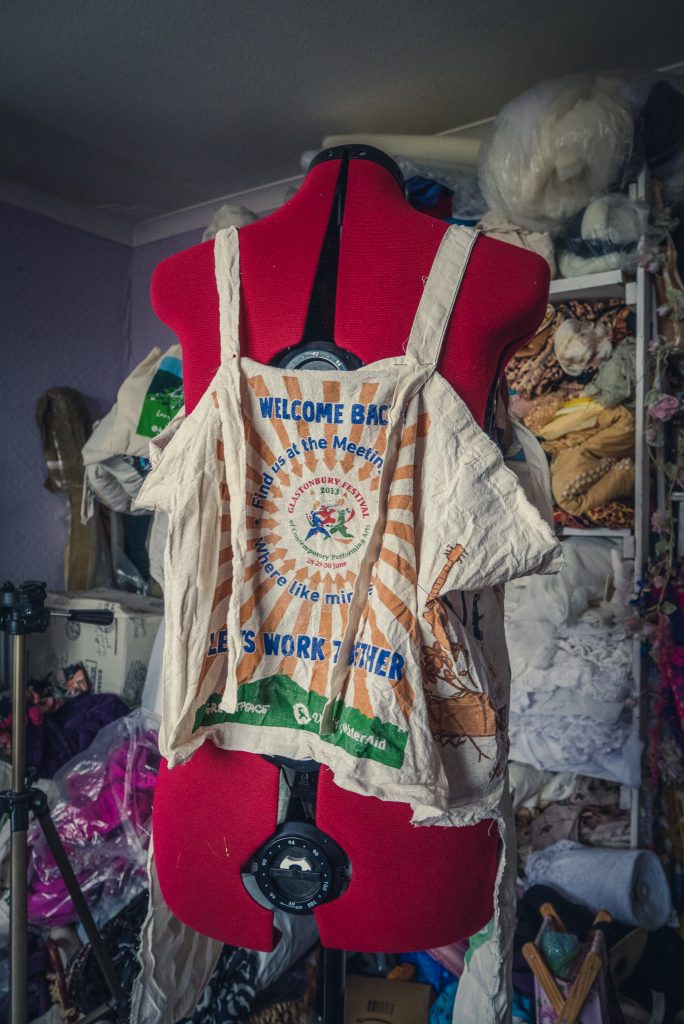 I couldn’t help myself; I used the bag that said ‘Welcome Back’ for the back! Unfortunately it doesn’t really show on the finished dress, but never mind! 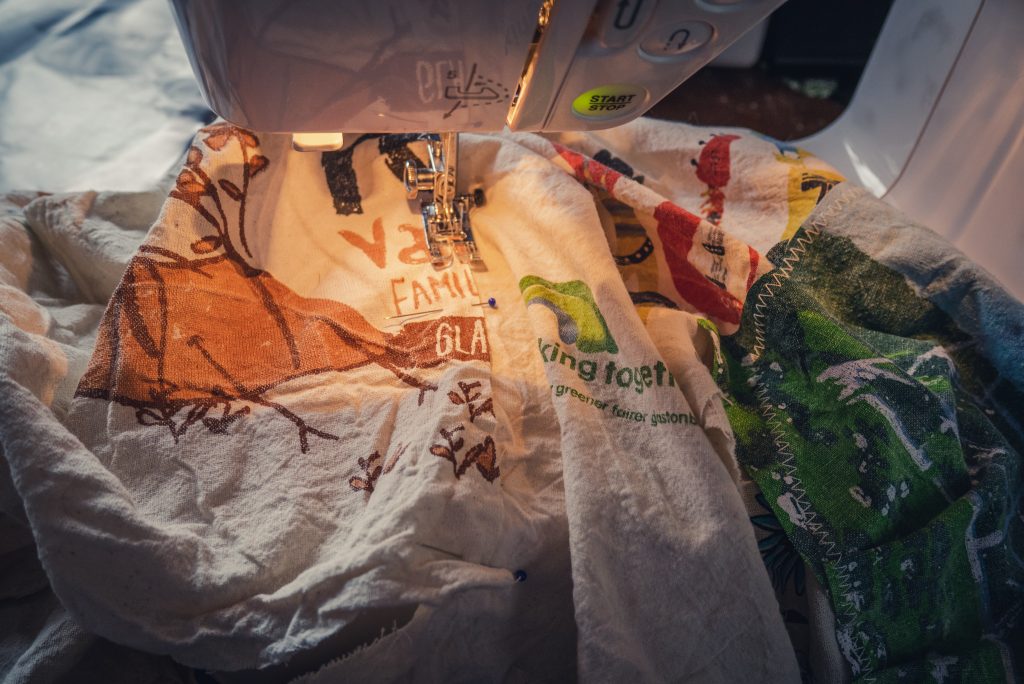 I cut open all the bags and patchworked them together using a secure zigzag stitch as I was overlapping seams rather than the traditional right-sides-together sewing. Fortunately I had gathered plenty of bags as I really wanted a big fairytale dress that would flow out to the sides when dancing! 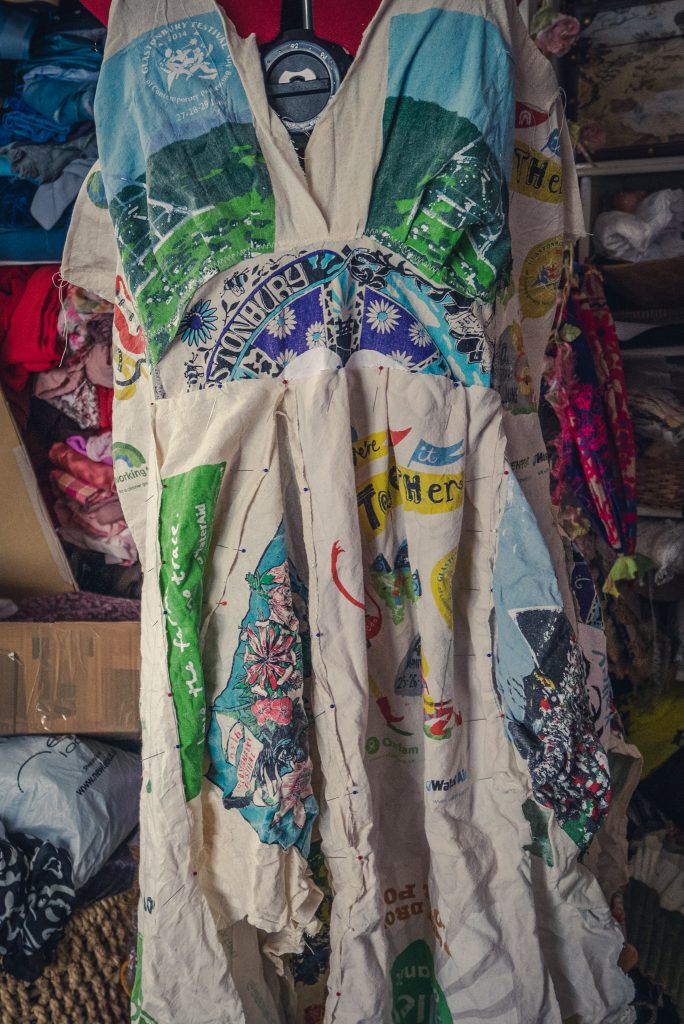 Lastly, I used the bag straps to form loops and knots around the lower part of the dress for a Cinderella feel; and then added more frills around the hem, and ruffles to decorate the neckline. I’m so pleased with the overall look of the dress, and when my daughter modelled it for me for the Threads of a Fairytale Etsy listing, I thought it really could be the perfect festival wedding dress if someone is getting married at Glastonbury Festival; or if not, someone would definitely be the coolest dressed person there! It is also the best form of sustainable fashion – all this fabric would have ended up in landfill if I hadn’t turned it into this dress – it’s a shame I couldn’t rescue more!

If you are interested in purchasing this dress, please click any of the following photos for more info. 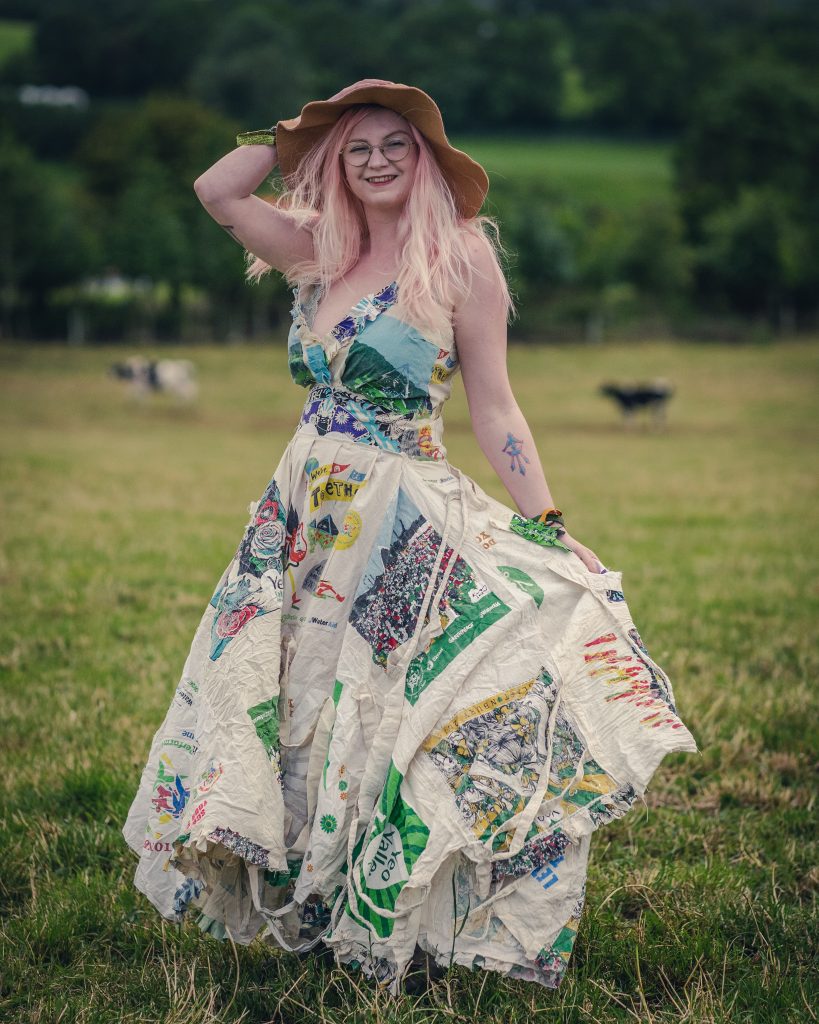 We had to take the photos fairly quickly, because the Worthy Farm cows were just getting up from their afternoon lie-down and were steadily munching their way through the field towards us! You can see the blurry outlines of the fence, tents, tipis and stages that are already in place on the Glastonbury festival site in the background. 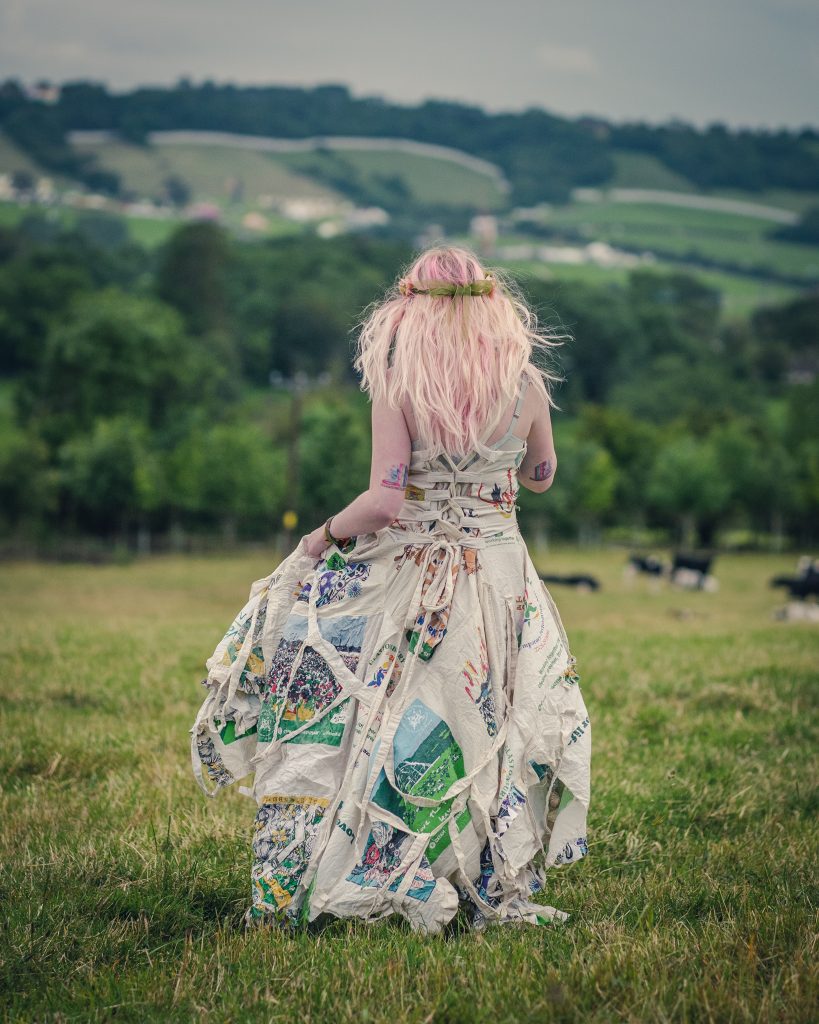 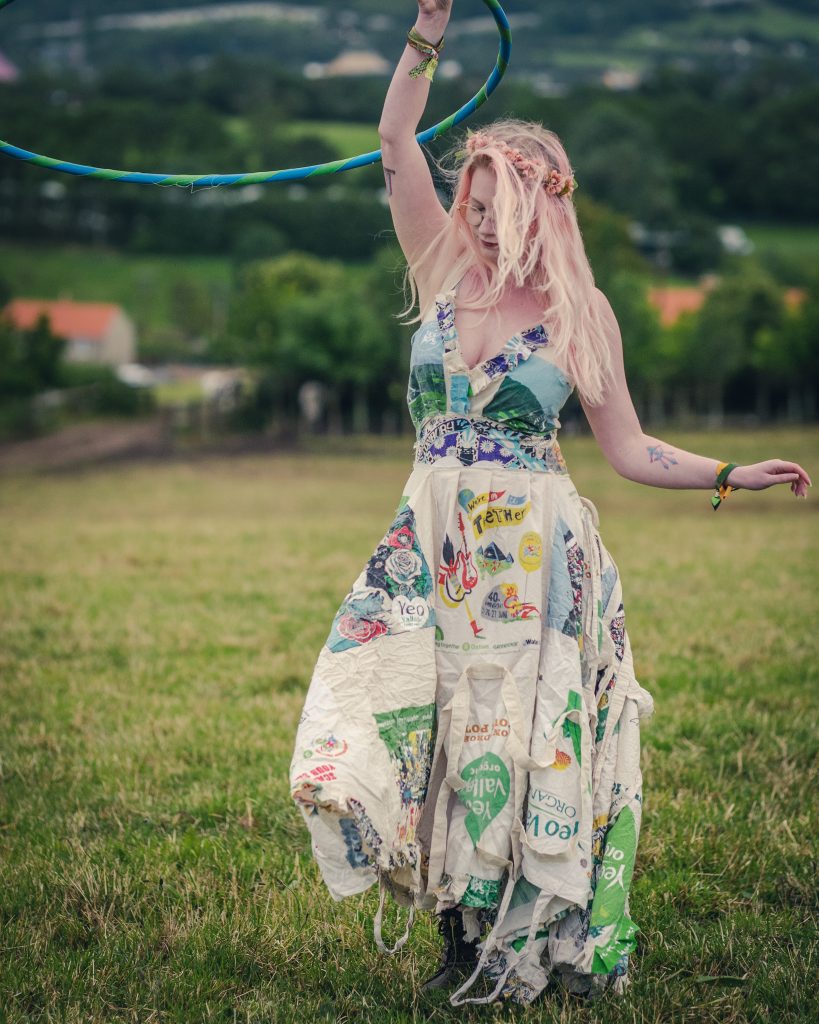 If you’re heading off to Glastonbury Festival next week, I hope you have a brilliant time. Let’s hope the sun shines for us!

Ps. I also sell bottle bags to carry around your Glastonbury Festival flask, and cup carriers for 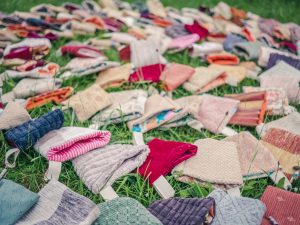 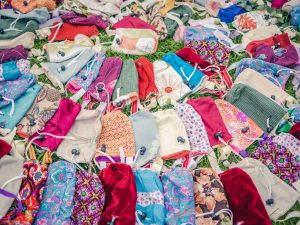 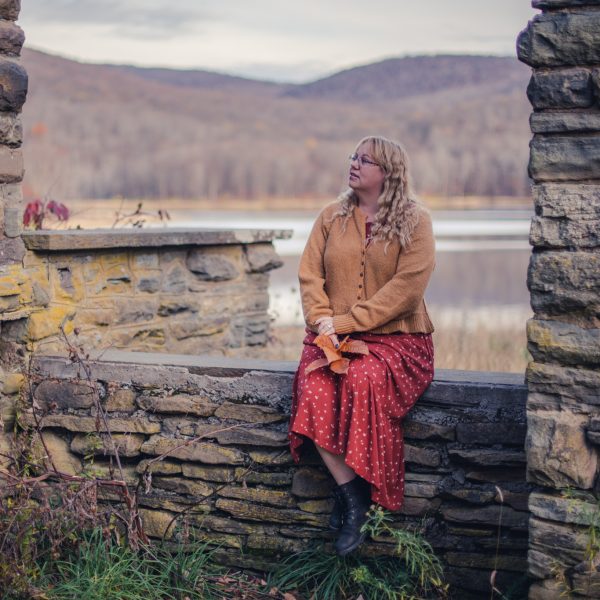 How to dress more creatively (part 2) Autumn – winter boho style
We tend to think of bohemian fashion as something for summer – all billowing white floaty dresses on the beach, or crochet vest tops and denim shorts at a music festival. However, I found a way to take the bohemian look into autumn… 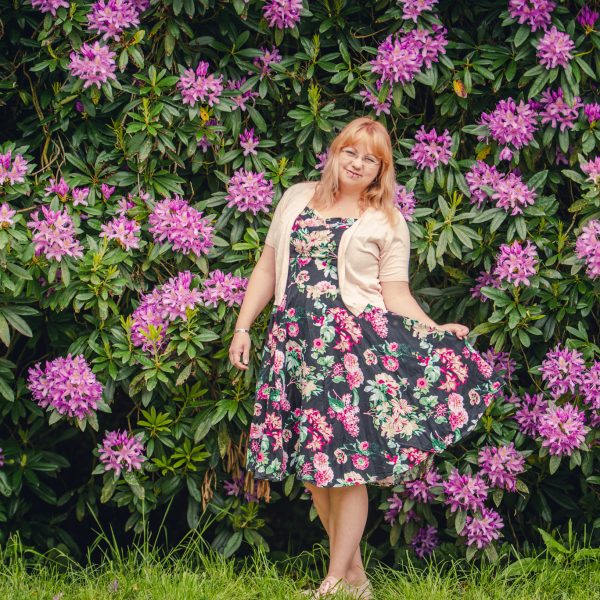 My wedding guest 1950’s floral dress
I can totally understand why there is so much online content at the moment about wedding guest dresses and outfits – it is quite a difficult decision you know….. 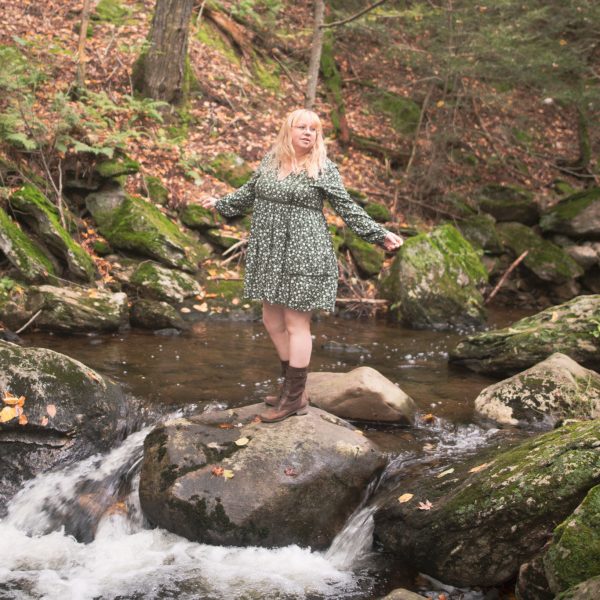 Styling a ditsy floral smock dress at Naugatuck State Forest
There’s something about the shape of smock dresses that I love. Probably, just how damn comfortable they are! And I was very happy to find this one at H&M as it fits well, but also has a few design details that means it doesn’t look plain and frumpy… 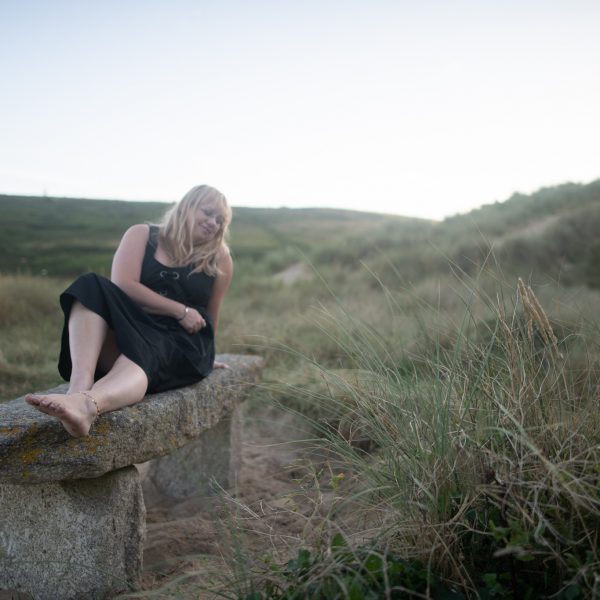 A plain black smock dress
This time last year Chris and I had our first campervan trip of the season to Cornwall, and it turned out to be a lot warmer than we expected! I feel that at the moment we’re in that hit or miss time – completely unpredictable – often looking warm and sunny, but then you find there’s a freezing cold wind, which stops at 2pm and then it becomes quite hot! Anyway, the black dress I’m styling for this blog post is ideal for now – as long as you have a cardigan handy!…