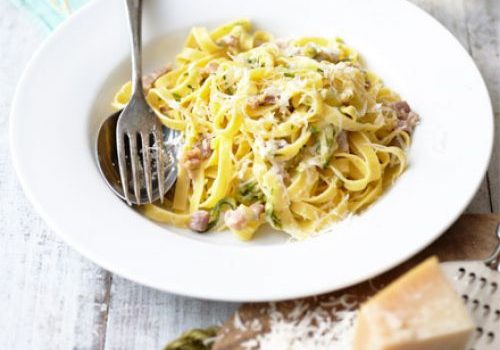 From the Sainsburys Be Good To Yourself Range. 99p
I’m writing this review because about twice in the last year I have bought a microwave meal, and twice it has been this one; and I don’t want to forget what I thought of it, so I don’t buy it again. On the packet it says “tagliatelle in a creamy bacon and mushroom sauce. less than 3% fat.” Sounds delicious doesn’t it? Well it fails to say ‘50% pepper’. It even smelt delicious, but I couldn’t eat it (and I rarely can’t eat something!) because it had something in it that tasted horrible. I think it was pepper, and I’ve just read the ingrediants and pepper comes before the actual tagliatelle pasta in the list; so that does explain it if it’s in quantity order.

So as you can guess, I do not recommend this meal! Also, if you’re buying it as part of a diet, you can forget it because it has 49.2 grams of carbohydrate and 10.6 grams fo that is sugars. And I don’t know where the less than 3% fat on the cover came from, because the small print says it has 9 grams of fat in it. I’m sure there’s a trading standards issue there. Or maybe somewhere on the packet in even smaller print it says ‘the grams of fat referred to the top of the packet applies only when three quarters of the meal is thrown away.’

How I Live Now