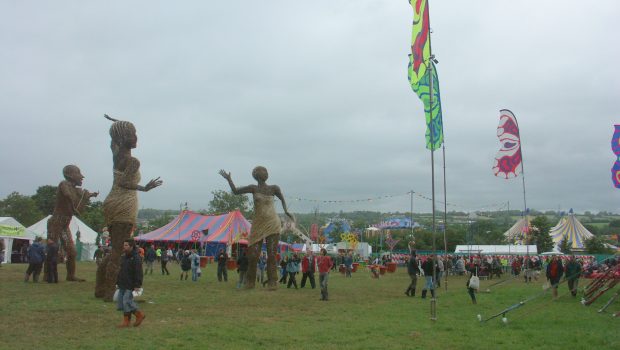 
You’d think that uni-cycle riding and juggling were pretty standard stuff, but I’ve put these 2 acts together as I wanted to compare them as they were so different.

I’ll start with Space Cowboy in the circus Big Top (not to be confused with another act of the same name, but involving sword swallowing on the Pyrette Ship stage). OK, this guy did have an incredibly high uni-cycle, and he juggle with three flaming torches; blindfolded for a very brief moment; so you’d think that would be the better act to watch than Goronwy Thom, whose cycle was much shorter, (but still about 6′), and who juggled with ordinary juggler’s club things, wouldn’t you? Well you’d be completely wrong.

Space cowboy was the worst entertainer I’d ever watched. Maybe he’d had a bad night; or wasn’t dealing very well with the mud or something, but when your job is to come out and entertain the crowd, you have to pretend you’re having the time of your life. This guy was so grumpy it was unbelievable. He spent the entire time making remarks putting the crowd down because we weren’t clapping or cheering him enough! How ridiculous is that?! He had an ego the size of America and I could tell he was thinking the whole time that he thought he was far better than to be performing in a muddy field in Glastonbury. When he lost his balance he even blamed the slippery floor. So what could have been an impressive act, was completely ruined by the attitude of this man.

Goronwy Thom in the Kidz Field Big Top was completely the opposite. He was funny, he was charming (he was also damn good looking, but that’s beside the point) and he had the audience totally with him. He didn’t have to ask the audience to clap and cheer – we all wanted to do that anyway. He made the act more interesting by pretending it was the first time he’d done it (making a comment that the uni-cycle looked much smaller in the catalogue) and the kids completely believed him and thought he was terrified! (Also worked as a cunning disguise for if he genuinely lost his balance) He entertained the kids by getting them to call out what part of the body they would like him to balance a club on, mid-juggle; and also hitting himself on the head. He kept the adults entertained as well by being funny.

I wouldn’t waste my money on seeing Space Cowboy; but I would gladly pay to see Goronwy Thom.

Harry Potter and The Deathly Hallows