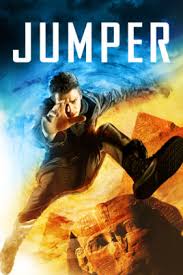 Not of the warm woolly kind; more of the jumping from one place to another kind – you know the ones. A film directed by Doug Liman.

“You’ll like it,” insisted my husband. I’m hoping he was lying because I’m sure that after god knows how many years together, that he would know by now that this is not the sort of film that would scream “Oh Helen would like this one!” Never-the-less I went along with it and was surprised that I did get drawn into it fairly quickly. The fast paced-ness of the action along with intruige supplied by the narrator meant that I didn’t have much choice. Samual L Jackson appears as a lovely evil Christian villain; Jamie Bell (the ballet one) appears as a cynical sort of helpful side-kick to the love-sick hero played by Hayden Christensen (Anakin Skywalker in star wars) and all acting was top quality.

That’s where the compliments end unfortunately and I can’t recommend this film because the ending was so unsatisfactory. I mean, if you’re like me you’d probably think that a film about teleporting from place to place wouldn’t be particularly good. I felt I was proven wrong in the first half, but the second half and especially the ending proved I was right all along. Too many threads to the story weren’t tied up. You got hints that there was a lot more to it than we were being told, and I expected to find these out by the end, but didn’t. So I was left feeling that I needed to watch the sequel straight away. Unfortunately, by the time the sequel comes out (if there is one – I’m only guessing) I won’t be bothered to watch it. In fact, I’ve lost interest already. To try an appeal to girls they’ve put in a love interest, but it feels awkward and the relationship doesn’t feel real. I can just imagine a producer in some Hollywood office going, ” Nah the girlfriends aren’t gonna like it. find some pretty starlet people will know from a TV series and get her in it somehow.” (Rachel Bilson, who I’ve just discovered was in the O.C. Haha, I was only guessing on that bit!)

Even if you fancy Samuel L Jackson, he’s not in it for long enough to make watching this film worthwhile. Sorry!