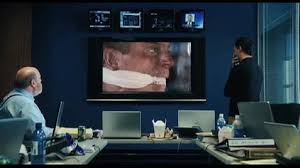 ‘Kill With Me’ is the the title of the serial killer’s website and it’s up to the FBI agents to stop him despite being seemingly untraceable. Thrillers aren’t my favourite kind of film; I have enough stresses of daily life without my heart pounding over whether the victim will be found before he is boiled to death! But I was drawn into it and although I can’t say I enjoyed this film, I can credit it for being a very good one.

It’s actually a deep look into human nature. The more people log on to the website, the quicker the victim is killed. It begins with a cat; (interesetingly the film-makers decided they couldn’t show a cat being killed; yet the torture and death of a few people is perfectly acceptable!) and inevitably the killings get more closer to home. They aren’t annoymous either so the story is more disturbing as we see their families and their normal lives; even someone logging on to the site and saying, ‘Hey isn’t that your Dad?’ to his friend and showing him the screen with his father getting slowly killed.

I don’t think this is giving anything away, but if you’d rather not know the killer’s motive, here’s a SPOILER alert. Please skip to the next paragraph NOW! It turns out the killer’s father commited suicide by jumping off a busy bridge. It was shown live by various news channels and repeated in slow motion by the channel with the best coverage. It then became one of the most popular items visited on the internet. You can see how this could mess with the son’s head.

How many people logged on to see the beheading of Kenneth Bigley? (In my Google search just now to check the spelling of his name I was shocked at the sort of websites I found.) I saw a wholly inappropriate trailer for a French film yesterday that I wanted to rant about on here, but decided not to because it would only increase its’ profile. Ah the human race has a sick and twisted mind!

Sorry – this was only meant to be a film review and has turned out to be quite philosophical and a little depressing! Anyway; a film definitely worth seeing if you like thrillers.

A chance to curb your cravings? A review of the Slissie
This is a new product, so I’ll begin by telling you what on earth a Slissie is! To be honest, it’s a bit difficult to explain, but it’s a weight-loss device that looks a little bit like a vape, and you suck on it like it is a vape, however there’s no actual vapour! Instead, it releases a burst of flavour into your mouth, and the idea is that it will trick your brain into thinking you’ve eaten something sweet, and therefore your cravings will be satisfied without actually having the calories of eating anything…..

“UNTRACEABLE” was a superb movie I thought.

A bit like “SE7EN” it is very intense and atmospheric with some good action and death scenes. It has a message too.

I thought DIANE LANE was great in the lead role.