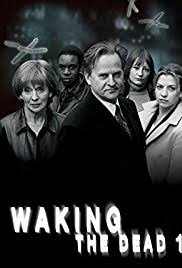 Wow this new series is good. The story-lines are exciting, different and full of drama and the acting is top quality. So far there hasn’t been a single slow episode. It’s also refreshing to actually have something to look forward to at the beginning of the week. If you haven’t watched it before, there’ll be no trouble in starting half way through the series. All you need to know is Boyd has a drug-addicted son who’s in and out of various institutes and although Boyd loves him, he doesn’t quite know how to deal with him.

Actually that’s the only thing that’s annoying me with this series; the occasional phone call of, ‘Luke? I can’t hear you; Luke? I’m in the middle of something; Luke? Are you all right?’ and the often staring into middle distance with a trace of a tear in his eye. I feel a little patronised by it, but I’m not sure why. Maybe because I think it’s obviously inevitable that Luke will end up dead in the last episode.

Also the constant disagreements between Boyd and Grace are a little tired.

But these are minor grievances in an otherwise fantastic crime drama.