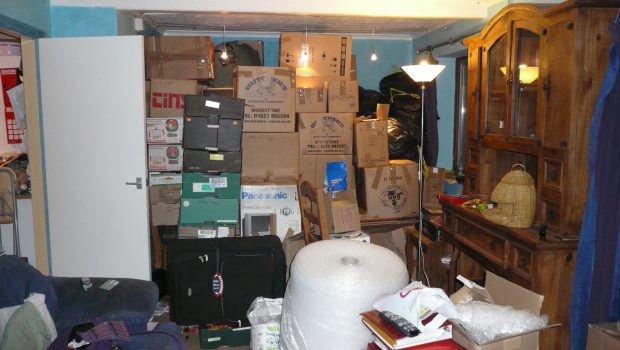 Isn’t moving house the most stressful thing people do in their lives? …

I cannot tell you how stressful this day was. I thought we were prepared; I thought we were packed. How wrong I was. We just had more stuff than I realised. And more stuff than the removal company realised. So we ended  up paying for another van and annoying our buyers who expected to be in at noon. The movers left at four and we still had the airing cupboard, the bathroom and half the kitchen to do!

The men let the cat out the bathroom twice; scaring it half to death the second time, chasing it round the house; so we were still outside an hour after handing over the keys searching for him.

Oh dear. I could also tell you the stress of buyers turning up and getting cross with us even though they told us we had all day to move out; kids crying over the cat; having no time to eat, but feeling too sick to anyway; friends of our buyer’s children running around and knocking me over while carrying heavy boxes; husband doing his back in etc etc, but I won’t bore you with all that. Just head my advice: you may think you are ready, but you are not, so accept offers of help from friends and family. Put the cats in a neighbour’s lockable bathroom if you can. The one thing we did right: Buy the kids a new Nintendo game – it kept them amused and out of the way; whilst also being able to look up occasionally to see what’s going on. But make sure they have enough food. I didn’t prepare enough and they got hungry with no time for me to get them anything.

You will need more boxes than you think you do – ask on Freecycle. We got nearly a hundred from there and saved us a lot of money. If you ask; Sainsburys will let you take their fruit boxes too. I can’t stress this enough: clear out your junk early. OK so I’m probably more of a hoarder than most people, but I still casually prepared for this move two years in advance and we still had so much stuff it wouldn’t fit into the van! And I’m kicking myself over the things we ended up leaving behind because I simply ran out of time to pack it.

I’m sure, there’s more advice to offer based on the lessons learnt from our terrible moving day; but honestly, I’m getting stressed just thinking about it, so I’m going to leave it there.

Oh one more thing: if you’re moving to the countryside and you’re not going to get there till after dark (even if you don’t expect to) and you’ve arranged to collect the keys from under the flower pot; take a handy torch. We just about managed to find ours by the light of a mobile phone!

The joy of the internet when house-hunting!

The mission statement of our renovation.