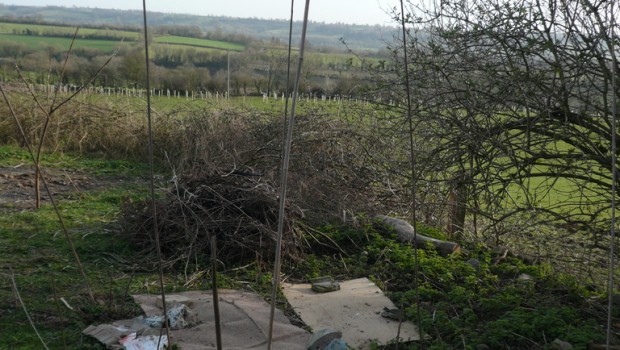 They came in November, and with the rush to get the house ready for Christmas, I left them in the box in the shed. Then I planted them three weeks ago at the bottom of the lower garden where I’ve started to prepare a fruit and veg plot. Alan Titchmarsh says February is the time to plant them, so I’ve got my finger’s crossed that they’ve survived.

I’ve stuck 2 parallel rows of  canes in the the ground, and covered the soil with a mixture of old carpet and hardboard to keep the stinging nettles down. There are a lot, so I had to take drastic action, but I’ve left big enough gaps for water to reach the roots.

At one end there is also a loganberry that I dug up from our previous garden and brought with us. I think it’s still alive. I also brought a raspberry that was given to me by my daughter’s ex-boyfriend’s Mum! I wish I knew which variety it is because it’s got amazing powers of staying alive. I’m ashamed to say that it stayed in the plastic bag it was given to me in for about 5 months; then I planted it in a pot to move, and somehow it managed to produce a few fruit last autumn!

I’m not sure how I’m going to keep the birds off them all though. We had so many logan berries in our old house that it didn’t matter if the birds had a few. Now I’ve got a lot less plants, and we live next to a field with a thick row of trees alongside it, I’m more concerned about them. I don’t want netting that birds can get caught in. I’ll get the kids to make mobiles from old cds and hope that will do the trick.

Stinging nettles are also a big problem where I’ve planted them. I’ve put down some of the carpet from the corridor upstairs, but I need more really. Annoyingly I threw away the old living room carpet; so now it will have to wait till we pull up the bedroom one. I’d better do it quick though as those nettles are getting a spurt on after last week’s   sunshine.

Anyway, I’ll let you know how the raspberries do. No sign of life yet though.

How to grow a Fedge