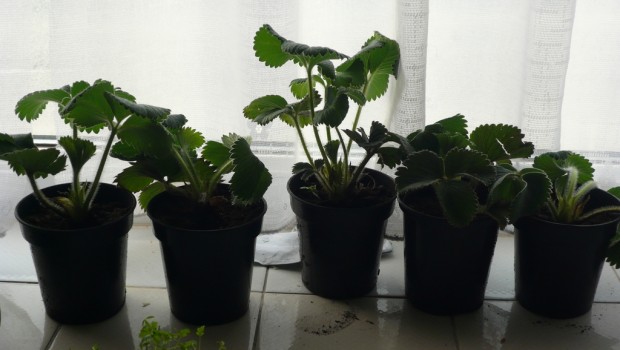 The beginnings of my fruit patch. And to quote from the Sound of Music: “Strawberries?” “It’s been so cold lately, they turned blue.”

Well I thought I’d well and truly lost the rhubarb. I dug it up from our previous garden and transported it in a shallow plastic tub. Not long after we moved, a gale blew it over and it lay on the drive for about a week. Then, all I did was scoop it back up again and place it somewhere out of the wind. I wasn’t too fussed as I don’t particularly like rhubarb anyway!

I was amazed when I saw the new pink beginnings of  fruit growing as I passed it last week. So I took it down to the bottom of my lower garden where I’ve cordoned off an area with string, and planted it there.

Next to it I’m going to put strawberries. (No idea which variety.) I bought some at the Wells market on Saturday, and was all set to plant them, till I mentioned it to another Mum at school who said it was probably too early to plant them outside. A good job she did, because I didn’t plant them while I checked on this, and this morning I woke up to an inch of snow. (I wrote this on 2nd March)

Incidentally, yahoo answers was no good as the answers were for the climate of various areas of America; The Kitchen Gardener by Alan Titchmarsh assumed I would already know, but The Gardener’s Year by Alan Titchmarsh said for February cover strwberries with a cloche, and for March, plant them out. I’ll wait until a bit later in the month I think.

I’ve taken a photo of them on my kitchen window sill. I’ll give them a water now and let you know when I’ve had my first taste of home-grown strawberry.