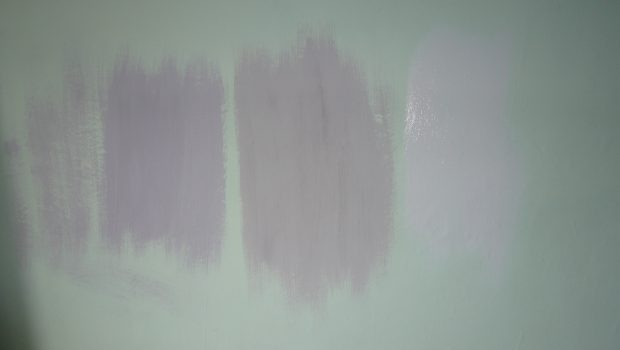 I have reviewed different brands of paint before, but I’ve never used Farrow and Ball paint until recently, and as I also just used Crown paint, I’m going to do another one.

I still stand by the B&Q One coat paint for cheap and excellent coverage, but for this house I wanted to use eco-friendly paint. So for the living room I splashed out on Farrow & Ball estate emulsion. To be honest, I was surprised at how many other ‘designer paint’ brands there were that were even more expensive. However, it is so worth spending the extra money. It was an absolute dream to work with. So smooth it was like cream! There was not a hint of a chemical smell, as it has minimal VOCs (volotile organic compounds) and the coverage and depth of colour was amazing. The first coat was watered down quite a bit as I was painting on bare plaster, and the second coat did it! There were just a few places where I touched it up with a brush afterwards. I used a tin and two thirds on a room about 20′ by 15′ plus a wall that goes up the stairs.

I bought mine from Brewers for £25 a 2.5L tin and it was worth every penny. I will not go back to using the cheaper paint, and this is why:

I’ve just finished painting my dressing room in Crown paint from the Heritage colours range. I had intended to use environmentally friendly paint, but I’d bought this particular tin for the study and then decided it was too dark. (I’m planning on redecorating the study in a couple of years anyway – I only painted it as I couldn’t stand to work in a room that was cream!) Do you know how many coats of paint I had to put on the wall? No less than five!!! I really don’t mind painting and decorating, but I was so fed up of this by the time I was finished. Thank God I hadn’t started a large room.

I was only painting over a very pale green colour – it’s not like it was bright purple or anything. And even after 5 coats I’m not entirely happy with it; there are a few patches that I ought to touch up, but I really can’t be bothered now. In several places where I’d gone round with a brush, like above the skirting board and at the top by the ceiling, the colour depth doesn’t match up. I had no problems like this at all with the Farrow and Ball paint.

I painted the floor with Focus DIY own brand matt paint which is, by the way, buy one, get one free at the moment. That took three coats, which after the walls, was quite a relief! And not that bad as I was painting directly on wooden floorboards with no undercoat. To me it seemed better than the crown paint, but both equally smelt of chemicals, though Crown claimed to be ‘Breatheasy’.