Doing up the dressing room. 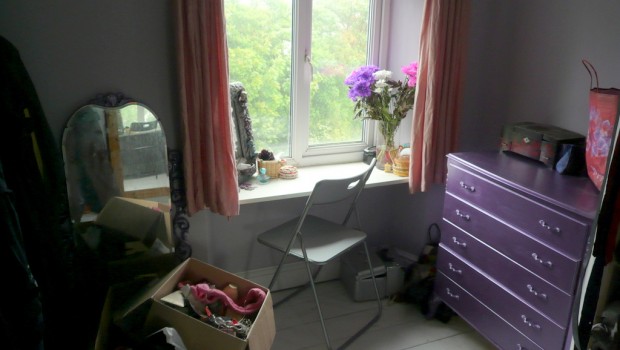 I know, it does sound a bit Lah de Dah, but I only have a dressing room because the bedroom is too small for wardrobes. Oh all right, and I do have a lot of clothes – but that’s mainly because I never get rid of any, not that I just buy a lot! Ok, it’s my piece of luxury.

I do wish I remembered to do a ‘before’ photo as well as doing ‘after’, but this room has been an absolute tip since we moved in nearly a year ago. My jumpers and trousers have been in cardboard boxes and my underwear in plastic bags for all this time. So I decided it was worth taking a break from doing the living areas and finally sorting this out. First of all everything got moved to the newly sorted bedroom, and then I used tester pots on the wall to choose the paint. 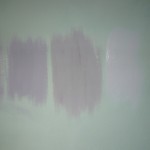 The one on the left of the picture is ‘Cashmere’ by Crown in the Period Colours range. the middle one is ‘Eiderdown’ by Earthborn in the Oliver Heath Eco Chic range, and the one on the right is Soft Haze by B&Q in the Colours Collection range.

I went with Cashmere on the left. I liked the chalky finish of  Eiderdown, but I didn’t like the plummy colour – it’s nothing like how it looks on the chart or in the pot; and I’d had the Soft Haze from when I was choosing colours for the study, but I still thought it was too bright – almost ultra violet. To be honest, my choice was the best of a bad bunch, but I really couldn’t be bothered with trying more testers, so I went with it. I’m actually really pleased with the results and now that I’ve covered all the walls I love the colour. It’s not too dark like I feared it would be, and it has a sort of grey tone that makes it look more classy than you’d expect for a lilac. I wish I had used it in the study now! (I reviewed the paint in a previous post, so I won’t go into how many coats I had to use again.) 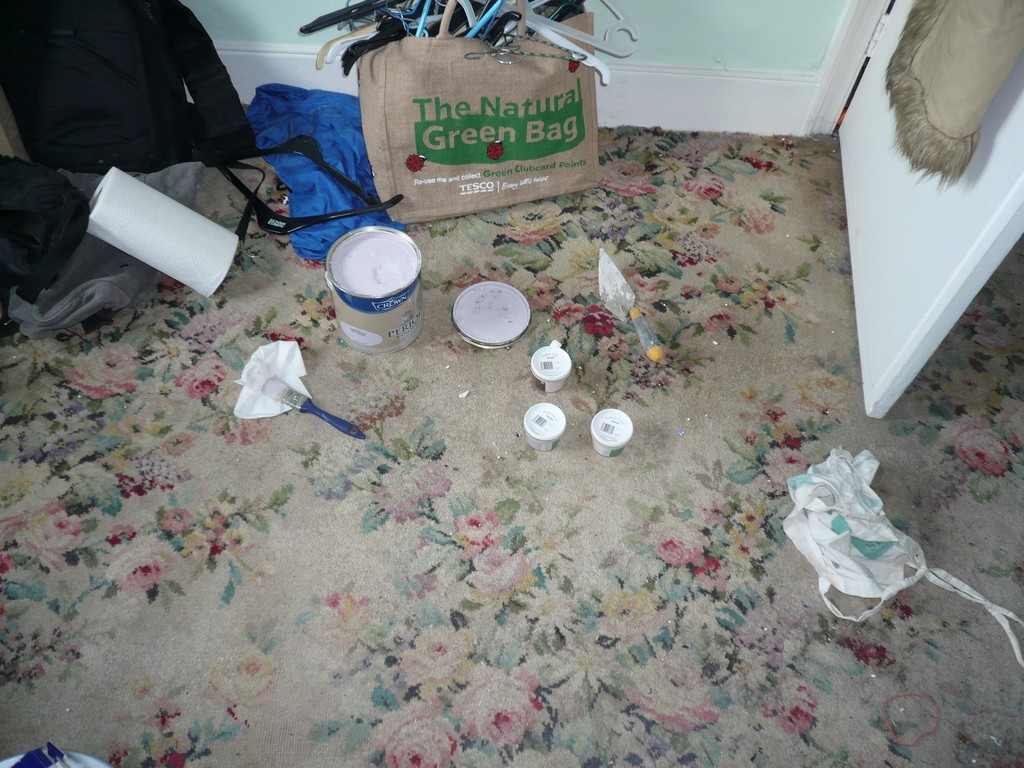 The next thing to do was pull up the old and stale-smoke-smelling carpet. I didn’t like the old fashioned pattern to begin with, but now it’s grown on me in a shabby-chic kind of way. Anyway, I dragged it down to the end of the lower garden to suppress a pile of stinging nettles and in the summer (the lovely hot summer that we are going to have this year)  it’ll be a nice place for the kids to sit in the shade.

I’m still no good at identifying wood, so I’ve no idea what the floorboards are made of.  Judging by the tall windows in that side of the house, we think that part was built in the early Georgian period, so if you know what they are likely to be, I’d love to know. Anyway, I painted them in Lavender Blush (men would call the colour ‘white’) though I admit the lavender colour is barely noticeable. (I also tried ‘Ocean Spray’. They look identical on the colour chart, but are actually quite different in real life.) I used matt emulsion, but in hindsight, I wish 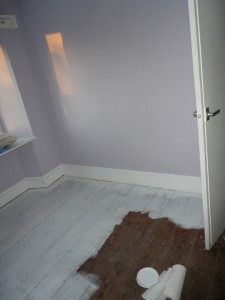 I used silk. It would be easier to clean (I haven’t tried mopping yet) and may have felt a bit nicer underfoot. I didn’t want to use proper floor paint, because I wanted a soft look, and I deliberately wanted the edges and scratches to show the original wood underneath.

It’ll be the only room in the house where I’ll paint the floor – mainly because my husband hates painted wood on anything for some reason, but also because I don’t have the guts to paint a bigger room! I’m really glad I did it here though, because it’s a north-facing room with tall trees the other side of the road outside. The room looks bright and fresh now and I love getting dressed (and undressed) in there!

I painted some drawers and a mirror  (I’ll blog about that tomorrow), used three clothes rails which I got free from Freecyle.org and put together a flat-packed shelf unit. I bought it new and in original

packaging for £12 from a boot fair and I’ve seen it in the Argos catalogue for about £50. Bargain! It is a brilliant piece of furniture and holds all my trousers, jumpers and a large selection of ’round-the-house’ clothes (ones I wouldn’t wear out, but I need a lot of at the moment as I’m getting so much dirty and spoilt doing the house up.) It has a canvas cover to keep the dust off and means I can keep my fairy wings on top. 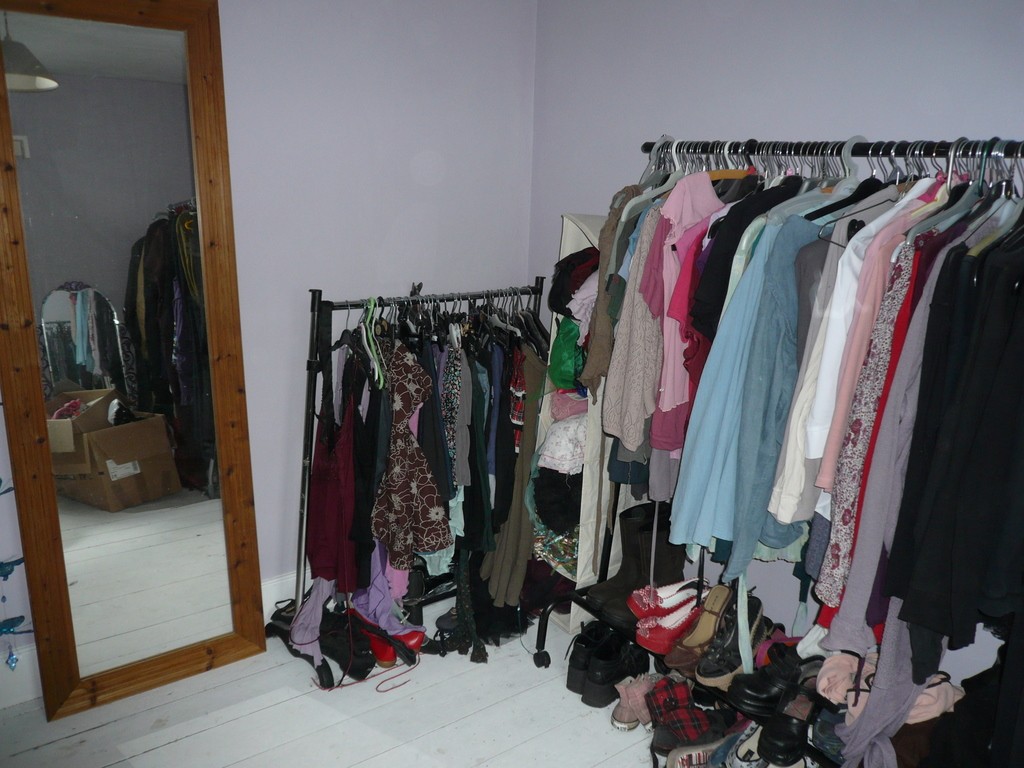 The fairy mirror on the window sill cost about £15 from a little shop in Old Town, Hastings; and the big floor-length mirror came off the front of a shoe cupboard and was given to me by my Dad, as it was left behind by previous tennants of his house. The pink silk curtains were given to us by a friend of a friend of Chris’s Mum when we got our first house fourteen years ago and have previously been hanging in my youngest daughter’s bedroom.  My make-up and hair stuff are still in a cardboard box, but I have my eye on a bedside cabinet with drawers on e-bay at the moment. The only other things I still want to get for the room are a nice light fitting and a tasteful net 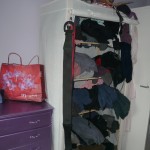 curtain. (Things were nearly very embarrassing when double-decker busses full of Glastonbury festival goers were queueing up outside last year! I need to get some quick before June!) Eventually I’ll need to replace the clothes rails as they never last long under the weight of my clothes.

All in all, I am very pleased with my new room.