“Who has dumped their old tyres in our garden?” 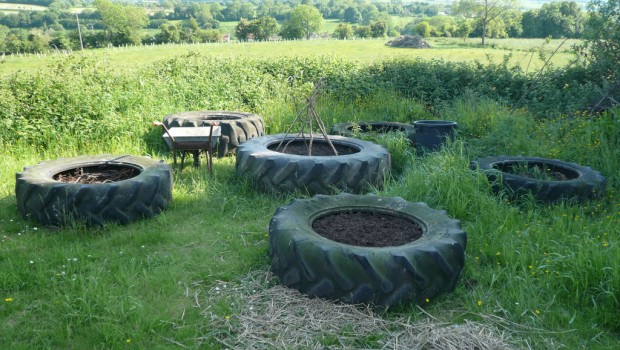 Asked my daughter on her return from school. “Don’t worry, I asked them to”, was my reply.
“Why would you want to do that?”

They have become my raised beds for growing vegetables in. I can’t remember where I got the idea from now; but I knew my husband would never get round to making any for me out of wood, and after watching them make some on Gardener’s World the other week, frankly I didn’t fancy having a go myself either! This seemed by far the easiest solution. Ok, you don’t have to have raised beds at all. My Mum grows perfectly good vegetables in normal beds in the ground. Where and why did the whole idea of needing your veg beds to be raised come from anyway? But I had this tyre idea and I thought it was a bit of fun. It may also help deter the rabbits who reside very close by, and may even slow slugs if I’m lucky. It also saves me from digging up all the rock in the ground.

They’re in the bottom of the lower garden, which is mainly my kids’ garden – the swings and trampoline just like the 14 ft trampoline in the UK are there at the top where it’s flatter. The previous owners made the garden by sprinkling grass seed over the thinnest possible layer of top soil over rubble that he’s accumulated from his job as a builder. It was a nightmare when I dug holes for the raspberries and rhubarb; the spade constantly hitting stones. The rhubarb by the way is getting demolished by slugs, so as soon as I have another tyre ready, I’ll dig it up and re-plant.

The tyres by the way, came from a very nice farmer who drove a fairly long way and wouldn’t even take petrol money from me. I did a Wanted advert on Freecycle, and kindly he replied and gave me six old tractor tyres for free. (apparently they were worth something in scrap last year, but not any more). They are handy for sitting on as we have no seating as yet down in that garden, but they are quite deep, so difficult to fill up, and not really wide enough for a lot of crops.

Luckily I had kept quite a lot of turf that I had dug up for flower beds and stepping stones in the top garden, that was loaming away in a pile  in the corner. That covered the bottom of two of the tyres. Then one of them took a whole bin of last year’s compost – not all completely rotted, but not too bad. Then I emptied a whole bag of bought compost on top. The sides of the tyre were mainly packed out with straw. In this one I planted mixed crispy lettuce seeds.

The other tyre was bigger and I put some cardboard in the bottom and sides to start packing out a bit. Then loads of grass cuttings mixed with old fir twigs (I’m still clearing all the fir we cut down a year ago) Then I emptied half the compost bin from the top garden. I’ve now used up all of the previous owner’s compost and am on to mine. I could tell because it was a mixed with the ash from our fires. The vegetables and grass had all broken down though, so I’m hoping this is good stuff. Then I emptied another bag of bought compost on the top and planted sugar-snap pea seeds round the edge in a circle. I’ve put a mini pyramid of sticks up as well. I thought this looked quite good as I’ve laid out the tyres in a flower shape and this is the middle one.

I am a little concerned about how I’m going to fill the others. I’ve still got to plant out the cucumber and the few dwarf beans that survived the greenhouse crash. I haven’t got a lot of home-brewed compost left. Perhaps I’ll dig out a pond somewhere.