The Prodigy at Glastonbury Festival 2009 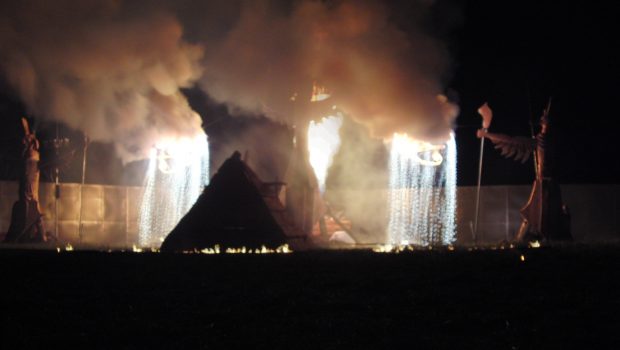 Playing on the Other Stage at Glastonbury 2009

They certainly lost the battle of who to see amongst all the clashes on the last night of the festival. The crowd was their smallest I’ve seen at Glastonbury before, but it was full of the hardcore fans, so it was a fantastic atmosphere.

To be honest, I would have preferred to see Blur. We did see them before in 1995, but it was so long ago, I hardly remember it, and we aren’t likely to ever see them again, but I was outnumbered by the rest of the family who would all rather see The Prodigy. We started at the Pyramid stage for the beginning of Blur (who were great) and then raced round and actually got there in time for the beginning of The Prodigy’s set.

We’ve seen them twice before at Glastonbury, once at Reading and once at V. I think I’ve preferred them before when Keith was the main stage presence. They’ve obviously decided that Maxim is now taking over and I didn’t like it so much. I’m going to sound really old now, but all he did was swear. Every other word was the F word and you could tell everyone was getting tired of hearing it. It just sounded like he was trying too hard to look cool or somthing. It really got on my nerves and that spoilt the performance for me; it was constant.

So; complaint out the way; I still enjoyed myself and the group did a fantastic show full of energy despite being ten years older since we last saw them (I can’t believe that!). Keith still picked up the vocals on his songs and was fantastic. They did an even mix of new tracks from their latest album and classics like Outer space, Breath, Firestarter, smack my bitch up and smoothly missed out their less popular albums completely. Me and the kids danced the whole time and really enjoyed ourselves.

More about the kitchen