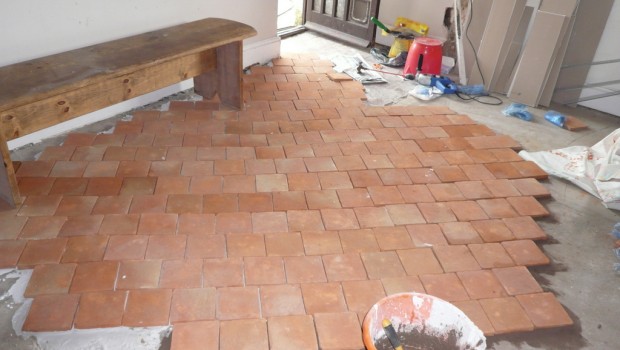 More about the kitchen I’m afraid.

(This was written in June – it’s taken this long to find the photo on the computer!)

We spent a long time agonising over what to put on the floor of our kitchen. Although the living room is 400 years old, the kitchen is only 30. That said, the outside of the house more or less matches, and there’s a fake fireplace in the dining end made with local stone and a big wooden lintel that looks old, so the aim is to try and make this side of the house look old as well.

Flagstones were the obvious choice and favourite of my daughter and husband. It would’ve been my first choice as well had we not found mahoosive flagstones in the floor of the living room. Nothing we could buy could match those and anything would look significantly inferior next to them. Besides which, the cost of reclaimed flagstones is huge.

So I looked for something completely different. I’ve seen pictures of bricks laid in a herringbone pattern on old kitchen floors and thought those looked great. But our ceiling height isn’t compatible with their thickness.  Then I discover blick slips/ brick tiles, but at £50 per square metre, suddenly I wasn’t so keen on those either. My Mum suggested lino. Hm.

Finally, I find www.wallsandfloors.co.uk with rustic old-looking clay tiles at just £16 per square metre, and eventually I summed up the courage to actually order them. So far I love them; I think they look fantastic and I’m very pleased. Tiling the floor with them though, is taking a lot longer than I expected. They do vary in size, and with the floor varying in height, it’s a bit tricky getting the floor reasonably level. I don’t mind undulating, but stubbing your toe on bits that stick up is not so good. Unfortunately, I do have a few bits like that.

I’m mixing up the lime mortar that I over-ordered on when I was pointing the walls, and using up that. I’ve pretty much run out though, so today I’m off to Focus to get some more. They won’t have lime, so my DIY book tells me to get some with 3 parts builder’s sand to one part cement.  Hopefully it won’t be more difficult to use.

Update on the wild garden

I remodeled my kitchen a while back, including the floor. It was such a mess! Not only that, but it’s tough making do without a kitchen for a while. Takeout every night gets old!