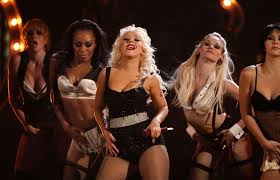 What is it about films that have anything to do with dancing, that makes it acceptable to dole out the same old formulas? This film was the most unoriginal, predictable, obvious, cliched and dull thing that sadly I’ve seen too many of. Honestly, from dead parents, the jealous dancer in the group, the dark side that seems tempting for a while, the guy friend who eventually becomes a love interest to the dance venue under threat, it was all in there. No need for a spoiler alert – you could tell me the whole plot from watching the first 5 minutes.

And Cher gets on my nerves.

Thank god for the music and dancing. It almost rescues the whole film. Christina isn’t really my thing, and I don’t like Cher, but their songs are really good and Christina’s voice has to be admired – she really is a talented singer. The dancing was something I really was impressed with – I hope the choreographer gets the credit he or she deserves. It was traditional burlesque dancing mixed with modern sexy moves from pop music videos and it was done effectively and originally and looked brilliant. Loved the costumes too!

Parents need not worry about the film being rude – it wasn’t at all. In fact there was almost no stripping at all – just a quick bit with large feathers! And a bloke’s bare bum to even things out a bit. The down side to this of course is that girls now think that burlesque is just dancing in sexy costumes with the odd wink and occasional suggestive gesture rather than actually getting your kit off and twirling those nipple tassles. The film was definitely an updated version. Of course, I’m no burlesque expert; it may be like that in real life.

The moral issue was not an issue at all. The audience at the club was equally gender mixed; there was nothing chauvinistic; nothing sexist; nothing anything. I liked that. If there’d been a boyfriend who didn’t like the way men were looking at her, it would  have been too much and I’d have stopped watching!

How to get to sleep – a sure-fire cure for insomnia
I’m sure there are many good things I have inherited from my mother, but the two best ones I can think of are: 1. The ability to make a bloody good cake, and 2. A trick that works when you can’t get to sleep. I’ll be honest, you’re not going to much like it, but trust me, if you follow my rules (they aren’t complicated), then I bet this will work 90% of the time….

The Venetian pirates bought her a palace to say thank you. #photosofafairytale What do you think she had done for them? @ Museo di Palazzo Mocenigo instagram.com/p/CCGo74XFS2Z/…

“Sing me a song of a lass that is gone; say, could that lass be I?...” #threadsofafairytale #outlander A very dramatic Outlander finale, and now it’s too long till the next series! Did you watch it? @ Glastonbury… instagram.com/p/CCGZwf4HZpD/…

Do you regret any lost friends? @ Lytes Cary instagram.com/p/CCEpJ-LHWUm/…

She set off on her journey wondering whether a magic spell had caused her to match the flowers... #photosofafairytale @ Appian Way, Rome instagram.com/p/CCEnhDdFDRB/…