From Riches to Rags 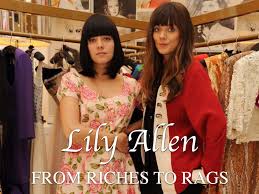 I’ve just caught up on Lily Allen’s programme I sky plussed. I’m sure she can see how very ironic it is that the voice-over guy constantly tells us that Lily has stepped out of the public eye at the same time as doing a voiceover for the channel 4 documentary she has decided to make with a camera crew following her around…

Anyway, despite that little blatant contradiction, I really enjoyed the three-part series and wished there were more episodes. Lily Allen is one of those characters who are fun and fascinating to watch and her frequent bursts of laughter left me feeling happy. The programme followed their progress as she and her sister, Sarah Owen planned their vintage clothing hire shop, Lucy In Disguise. It annoyed me the way channel 4 kept trying to make more of a drama of the relationship between Lily and her sister, when I never felt it was ever particularly serious. And when they brought in Mary Portas (of Mary Queen of shops) it seemed she was being rather sharp with her common sense for the sake of the cameras. Though I suppose it’s possible she is just like that.

As a young Mum with frequent mutters to the tune of “What a waste” following me around in my younger years, I found it so refreshing and brilliant that there was someone publicly bigging up motherhood. (Bigging up? I don’t normally say bigging up.) The scene on the roof terrace when Lily said that she enjoys looking after people and looking after a home and feeling that being a mother was her vocation in life, I thought was particularly wonderful, especially as those sentiments are so utterly unfashionable and housewives are generally made to feel they are unworthy human beings. Thank you Lily for a step towards this being ok again.

Of course  those words seemed to make the tragedy of her still-born child (and was it a miscarriage as well before or after that? – I don’t know) even worse. It was very moving watching the end of the last episode.

After watching the planning of the shop in such detail I wanted to know more about how it was doing after opening day. There was a brief clip three months later that didn’t really say whether or not it had turned out to be a success. Then voice-over guy said they were breaking even. Does that mean that in just three months they had earned enough to pay off the thousands and thousands Lily had spent on clothes and the bank loan? If so then that is incredible! Or did he just mean they were making enough to cover business rates, rent and staff wages? More details please! I want a follow up programme. Considering it has now been nearly 6 months since the shop opened, voice-over guy could have been more up-to-date.

For those of us who are fans of Lily Allen as a singer/songwriter, hopefully this documentary shows that she is not quite as averse to being famous as she might claim and that we might see her back on stage in a few years time.

I’ve loved looking through all my old photo-shoots recently - this one is from 9 years ago! This was made with the very first big box of unwanted Indian clothing, and I’ve bought many many more since to reuse the… instagram.com/p/CDeq8pQn2uO/…

Most common question asked about our new van: 'Do you have a loo?' I answer this in perhaps too much detail in today's video: youtube.com/watch?v=kMOSaK… #vanlife