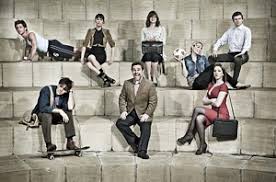 On channel 4 on Wednesday evenings. A comedy series by the same writer and creator as Green Wing, Victoria Pile.

I loved Green Wing, but I’m sitting here watching the second episode of Campus feeling rather underwhelmed. I’m really hoping that the more I watch it, the more the characters will grow on me, but at the moment, I’m not sure they will. Even the horrible characters in Green Wing were funny or likeable in some weird way, but there are too many people in Campus that I simply find annoying. The main character, Jonty de Wolfe being the worst of the lot – it especially grates on me when he shouts at people through the megaphone. I just don’t find it funny. No doubt this’ll be the very untrendy thing to admit to – I am reminded of all those celebrity The Office fans condescendingly telling the others that ‘you just don’t get it.’ (Incidentally I did like The Office, but I didn’t say that to those who didn’t!)

The whole thing feels a bit forced, like it’s trying too hard to be weird. I like Lydia Tennant, Flat pack, Imogen Moffat and Matt Beer, but not the others really. There are some funny moments, and it’s fine to have on whilst I’m updating this site or checking Etsy, so I’ll keep going, and as I get more used to it, hopefully I’ll enjoy it more.